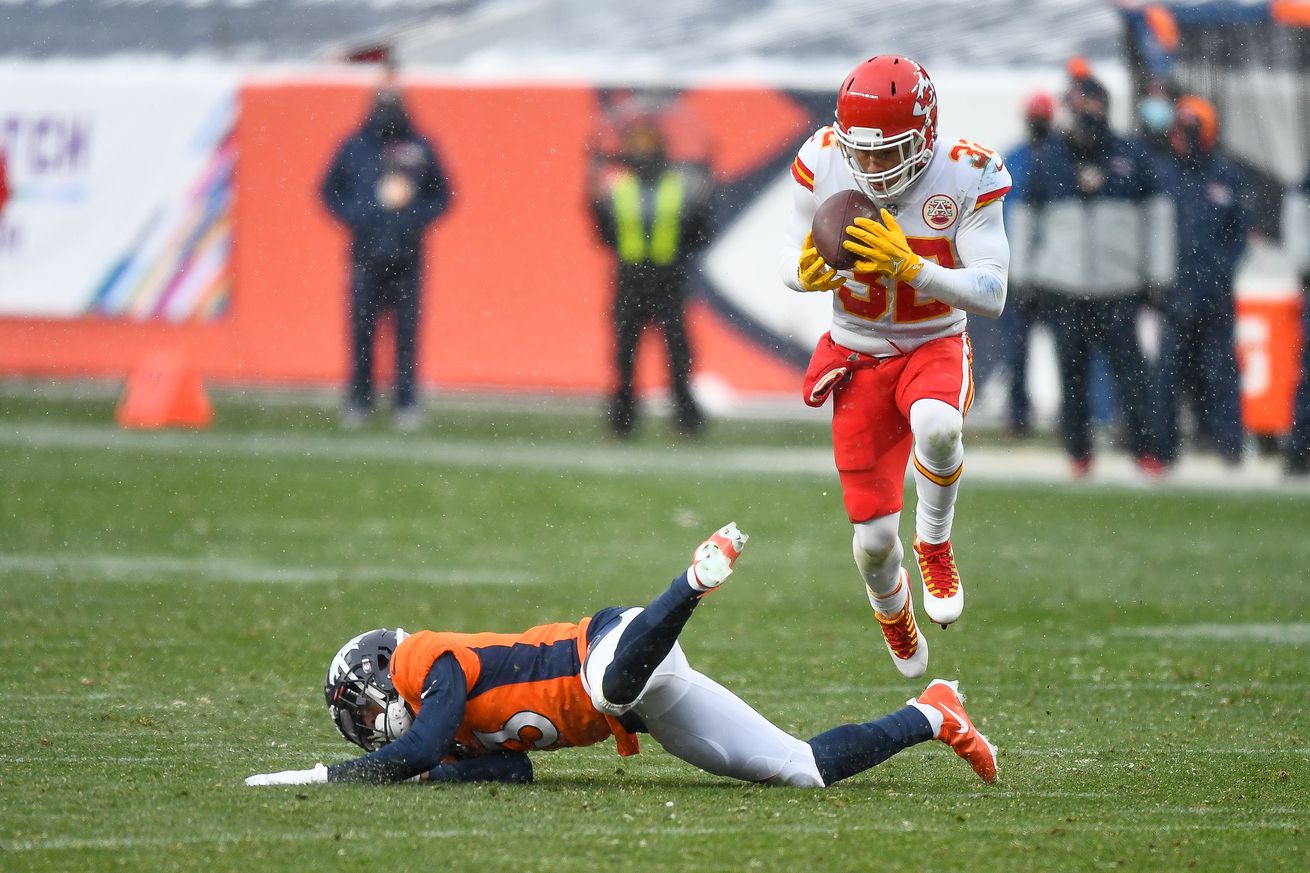 Midway through the third quarter of the Kansas City Chiefs’ 43-16 trouncing of the Denver Broncos in Week 7, quarterback Patrick Mahomes had 114 passing yards as he watched his team take a three-possession lead. For the game, the offense never converted a third down, was notably outgained by Denver, and only one skill position player earned over 60 total yards by themselves.

The blowout was possible because of the performance by the Chiefs’ defense and special teams units. Not only did they both have good overall games; they also made the two biggest plays of the day:

On a second-down pass in the second quarter, safety Daniel Sorensen jumped a route and took the interception 50 yards for a touchdown. Almost five game-minutes later, wide receiver Byron Pringle returned a kickoff 102 yards to increase the Chiefs’ lead to 24-9.

Those highlights will get the attention, but the units did so much more. The defense forced four total turnovers, kicker Harrison Butker made all three of his field goal attempts, and punter Tommy Townsend had one punt downed at the 1-yard line.

As a leader of both units, Sorensen appreciated the all-around effort.

“That’s the ideal way you want a defense to play,” Sorensen explained in his interview on the team’s post-game broadcast, “Chiefs Rewind.” “It’s aggressive, forcing the quarterback to make tight throws. You see tipped balls, guys being in the right spot, tight coverage allows them to make a play on the ball. You got [Mathieu] coming up with a tip, (defensive tackle) [Tershawn Wharton] comes in and punches the ball out cause he’s hustling to the ball. Numbers favor us, when we get guys rallying and pursuing to the ball, you’re able to create turnovers and they start coming your way.

“Obviously, special teams is a big part of it too. We had a muffed punt that we had a chance to come up with, the big kickoff return from Pringle, that’s the ideal way that we want to play Chiefs football. When we’re clicking on all cylinders, we’re being aggressive and getting all three phases of our game going, we’re a tough team to beat.”

Sorensen got his chance to speak publicly after the game because of his noteworthy showing. He led the team in tackles, was constantly hitting ball-carriers hard and hauled in the big interception.

His teammate in the secondary — safety Tyrann Mathieu — didn’t get a good look at the play, but he wasn’t surprised by who made it.

“If I tell you what happened with Dan’s play, I wouldn’t be doing my job because we were all in man-to-man coverage,” Mathieu joked in his post-game press conference. “But I did kind of see Dan jump in front of the route. That’s what we expect from Dan, he studies really hard, he’s a guy that’s always prepared. He’s always clutch, he’s always stepping up making those big-time plays when we really need it.”

Mathieu had a similar impact on the game. He also nabbed an interception, but his came right to him off of the intended receiver’s hands. Besides the five tackles, Mathieu also recovered a fumble after Tershawn Wharton dropped his initial fumble recovery.

The whole play was a microcosm of how hard the unit was playing for each other.

“There’s a lot of guys that have really selfless play in them.” Sorensen admired. “You see Terk [Wharton] hustling to the ball. That’s a defensive lineman that’s 15 yards down the field making a play. That’s selfless, he’s sacrificing to hustle and comes up with a big play. [Mathieu] is right there to pick him up when that ball pops out again. You got guys trying to block for him as he’s trying to return on his interception. Doing the little stuff, those are the things that are selfless — and no one cares who gets it. We’re all in this together and we’re all moving in the same direction, hustling and sacrificing. Today, we set a standard for ourselves.”

Sorensen set the standard, and Mathieu acknowledged the progress they’re making toward the standard he willed them to last year.

“This is a new season, and you have to build your way to championship talk, championship swagger,” Mathieu declared. “These last two games we’ve been able to put together, I do feel like it’s us tapping back into that mantra, that attitude, that standard. We still have a long season ahead of us, we have some big games coming up that are going to really prove who we are as a defense. We’re just looking forward to stepping up, coming to work each and every day with that attitude, and just having fun playing for the guy next to you.”

The defense had fun, but it was an atypical contest. They aren’t used to having to carry the offense — but they embrace it when they get the chance.

“Any time the opportunity presents itself for us to stand up, make plays, give the offense the opportunity to score even when they’re not clicking on all the cylinders they’d like — we take great pride in it.” Mathieu assured to reporters. “That starts with coach [Steve Spagnuolo]. I think me and him are kind of the same, we take everything so personal. I think it does the group well, having a chip on our shoulder. Not necessarily being the little brother, but wanting to be part of the reason why the Kansas City Chiefs are a great team.

As the team nears the halfway mark of the 2020 season, the players know they have further progress to make.

Last season, a Week 7 road victory over the Broncos gave us a glimpse of the Chiefs’ defense’s ceiling; this year, it re-solidified how impactful it can be in any given game.