Chiefs cornerback Bashaud Breeland was arrested on Tuesday in South Carolina, as Joshua Needelman of the Post and Courier reports. Breeland’s charges include: resisting arrest, possession of an open container of alcohol in a motor vehicle, marijuana possession, and driving without a license. 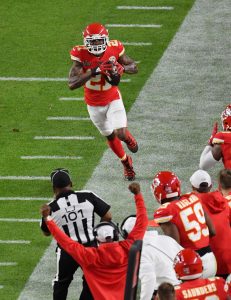 Breeland recently re-upped with the Chiefs on a one-year, $4.5MM deal, returning him to the defending champs. He’s still only 28, so it’s an excellent platform opportunity for the cornerback if he can build off of last year’s momentum. In 2019, Breeland notched 48 stops, eight passes defended, and a pair of interceptions in the 2019 regular season. He also came away with an interception in KC’s Super Bowl victory to cap his year in style.

The arrest, meanwhile, could result in league discipline. For his part, Breeland says the charges are without merit (via Twitter).

Before joining Kansas City in 2019, Breeland had an unusual 2018 in the football world. After signing a three-year, $24MM deal ($11MM guaranteed) with the Panthers, his contract was nixed due to an infected foot. Then, he waited until late September until he finally found a home with the Packers. That didn’t go according to plan either – Breeland was limited by a hamstring injury and played in only seven games.

In other Chiefs news, the team recently restructured Laurent Duvernay-Tardif‘s deal to carve out additional cap room. The guard’s cooperation was sorely needed – the Chiefs had precious little cap room heading into the draft, even after revising Sammy Watkins‘ contract for the 2020 season.