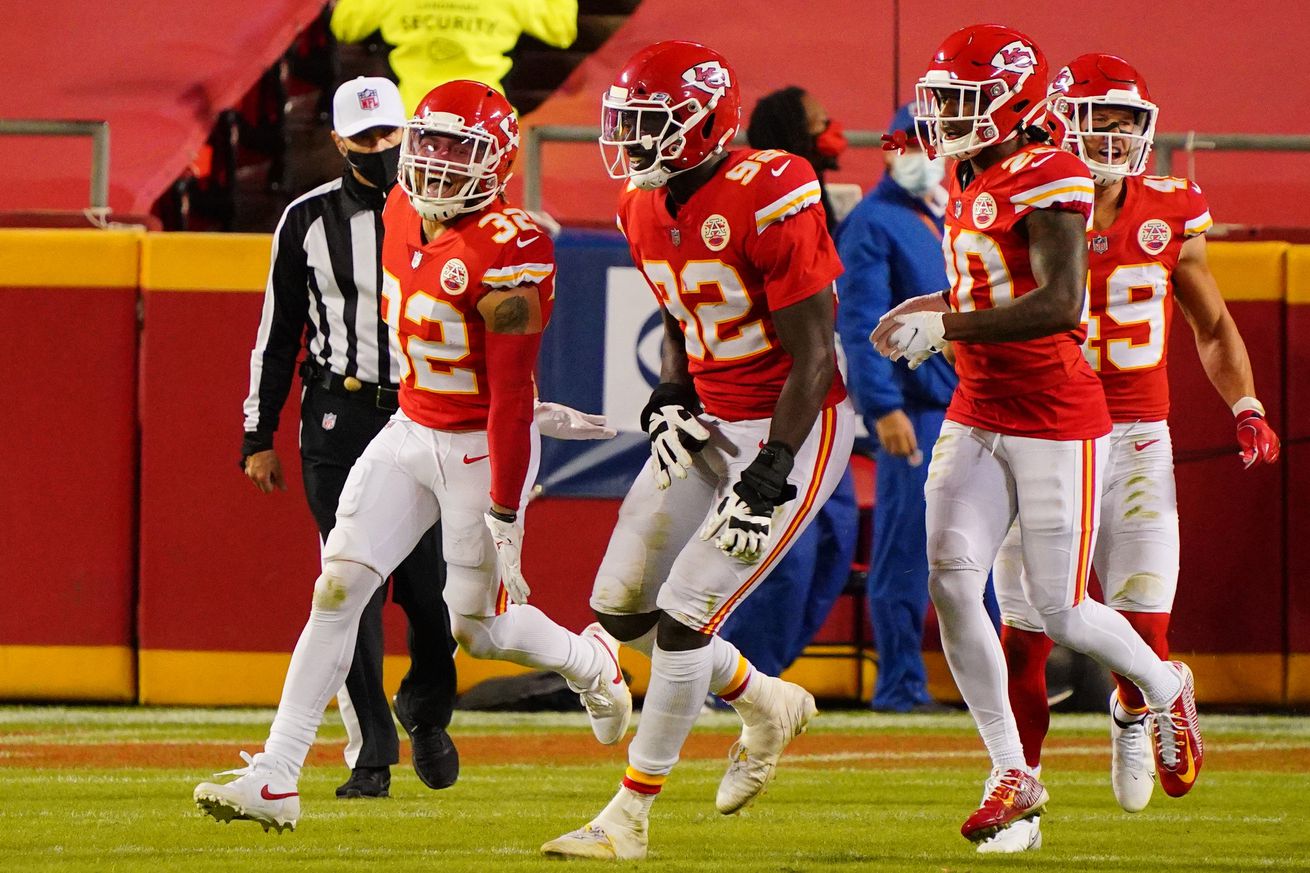 The Arrowhead Pride Nerd Squad breaks down the Raiders’ offense — and a concept we might see on Sunday.

The Kansas City Chiefs defense was riding high entering last week’s matchup with the Las Vegas Raiders. The defenders were playing well, holding the opposition to minimal explosive plays and getting after the quarterback. Unfortunately, the Chiefs did none of those things well against the Raiders.

They’ll need to right the ship quickly this week, as the Buffalo Bills are a formidable offensive foe. They have a strong vertical passing game, good wide receivers, running backs that are hard to bring down on first contact and a quarterback that can extend plays very well.

With that in mind, let’s dig into the Bills’ personnel — and a concept we may see on Monday. Then we’ll discuss how the Chiefs defense can try to slow them down — and take down one of the major contenders in the AFC.

Quarterback Josh Allen leads the Bills in his third year in the league. While he’s best known for a huge arm and tremendous velocity, Allen has taken significant strides this season. His completion percentage is up 10 points on the year, and his yards per attempt has risen by 1.7 yards in 2020. He’s also taking care of the ball better than he has in previous seasons and is dishing out touchdown passes at double the rate of his previous best season.

The Bills have a backfield of players who are difficult to bring down. Allen himself is no easy target, but both Devin Singletary and Zack Moss possess great contact balance and are difficult to tackle on first contact. Singletary is also a fantastic pass-catcher, meaning the Chiefs defense should expect to see plenty of him, regardless of the game script. TJ Yeldon and Taiwan Jones add a veteran flavor to the bottom of the position group.

Buffalo made a massive trade this offseason at the wide receiver position, acquiring Stefon Diggs for a multitude of picks — including a first-rounder. Diggs has already ingrained himself in the offense and has a great rapport with Allen. He’s averaging over 100 yards a game and 10 yards per target and is one of the league’s top wide receivers.

Lining up opposite of Diggs is John Brown, a speedy deep threat that tracks the ball very well — another player that complements Allen’s abilities. Cole Beasley and Gabriel Davis are both strong route runners and typically see the defense’s third or fourth-best player in coverage. Allen has started to lean on these two on third downs, as they tend to create separation against depth defenders.

The Bills have a decent tight end corps, led by second-year player Dawson Knox. Knox is a more of a move tight end that sees a fair amount of linebackers in coverage due to the good wide receiver group, but he is out on Monday. When Buffalo needs a blocking tight end, they rely on Tyler Kroft to get the job done, although he’s no slouch as a receiver as well.

The Bills offensive line starts with a former Chief and fan favorite in Mitch Morse. He’s been a rock-solid player at center for Buffalo thus far this year and is a terrific athlete that pulls into space arguably as well as any other center in the league. 2019 second-round pick Cody Ford and eight-year veteran Brian Winters line up at the guard positions. Both are large, stout players that have plenty of ability to drive defenders off the spot. On the outside, Dion Dawkins will start at left tackle and Daryl Williams at right tackle. Williams, in particular, has had an incredible season to date and looks like an excellent offseason pickup for the Bills.

BUF offense is very comfortable out of empty and likes to put Diggs in the slot with a pick/rub opposite of him.

Diggs in the backfield, motions out. Singletary in motion behind the WR, trying to get a natural pick of the defender. Weak S cuts the drag, Diggs open on the post. pic.twitter.com/vVsVLnpAme

After the Bills traded for Diggs, offensive coordinator Brian Daboll rightfully made him the focus of the offense. Diggs’ exceptional route-running ability affords Daboll the luxury of lining him up wherever needed without losing effectivity. This results in plenty of snaps for Diggs out of the slot, particularly when the Bills go with an empty backfield.

This results in the defense tilting coverage toward Diggs, either with a safety over the top or a linebacker underneath. The increased focus — and the five offensive players in the route — typically leaves the receivers on the opposite side of the field in man coverage, making for a perfect opportunity for a “pick” or a “rub” to try to free one of the receivers.

Singletary is a terrific route runner for a running back, and Daboll does well to send him in motion behind the weak-side slot receiver. He slow-plays his release, tucking in behind his teammate in the hopes that the route will collect the defender. The defense plays the route combination well and stays in tight coverage.

Meanwhile, Diggs beats his man on the deep over and the safety is late to react to contest the catch. Diggs’ ability to naturally separate on the route and Allen’s arm strength make for an easy pitch and catch for a massive gain.

BUF is great at manipulating the MOF out of empty.

Again, Diggs in slot, rub opposite, but dual whip routes from the interior receivers. LB’s expecting a drag on third and short have eyes on the weak #2 and #3, pulling forward and leaving a huge hole for a big gain. pic.twitter.com/OqcWuYypR2

When defenses sell out to stop Diggs, the pick route becomes even more important out of empty. The weak-side number one receiver has a simple in-breaking route on this play, and it’s the two whip routes from the slot that get him wide open.

The defense walls off the middle of the field with its linebackers to chip Diggs and the opposing slot receiver on a third-and-short call. The weak slot gets far enough upfield to attempt to get a pick on one of the two defenders, then runs a whip route — breaking in and pivoting back out to the boundary. Since the linebackers are focused on the shallow slot routes, this opens up the middle of the field for the weak-side No. 1 receiver on the in-breaking route.

Empty backfield formations make life difficult on the defense because they have to cover so much of the field horizontally and it puts an extra offensive player immediately in the route. Moving Diggs to the slot forces defenses to shift their help to the interior and can pull hook defenders easily out of position — as the above play shows.

Steve Spagnuolo has countered empty formations with plenty of blitzes so far this year, attempting to force the ball out quickly and removing some deeper routes that could be attacked against a heavy blitz. That may not work against Allen this week, as he can buy time with his feet and is comfortable even in a collapsing pocket. It may be a better plan of attack to rush three against Allen while dropping a spy to the hook zone, flooding some areas of the field and preventing the offense with wide open throws.

The Buffalo Bills are a dangerous football team that can hit the defense effectively at multiple levels.

They have a solid duo of running backs that can attack the edges against the Chiefs slower linebacking corps. An outside-zone heavy rushing attack from Singletary and Moss could find some real success, especially if the Chiefs are having to keep two deep safeties as a lid against Diggs and Brown. The defensive ends will have to properly seal the edges against the rushing attack and the linebackers will have to be quick and decisive to fit the interior gaps to prevent big plays.

In the passing game, it’s going to be about containing the Bills vertical threat. The Chiefs did a poor job of that last week against the Raiders, and this Bills offense is built for even more vertical concepts. “Cut” calls to take away a drag or a dig will have to be properly communicated to the other defender because there’s likely a backside vertical route off of it this week.

The Chiefs defensive line will have to have a big game to win this week. Setting the tone up front in the run game and hitting Allen when he drops back to pass are the keys to slowing down this Bills attack. Buffalo will still get their opportunities, but Chris Jones and Frank Clark will be necessary to get off the field against Buffalo’s league-leading third-down offense.

I expect a heavy-hitting game with lots of back and forth between these two teams, but I think a motivated pass rush — and Tyrann Mathieu lurking in the hole for an interception — can push the Chiefs defense to right the ship against a good Buffalo offense.