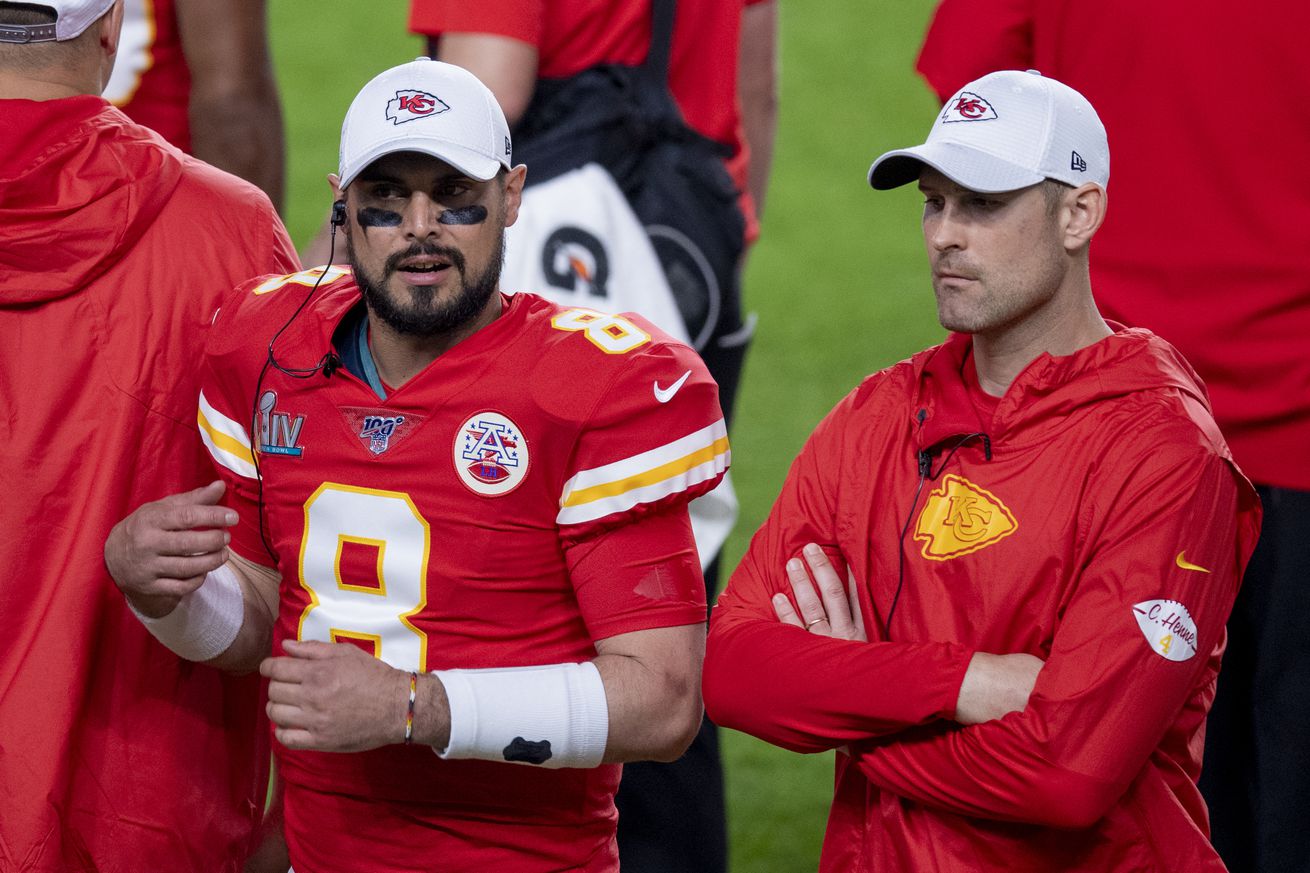 Even though both players ended up on the active roster at the end of the season, the Chiefs will likely go back to their established routine in 2020.

Throughout his tenure as Kansas City Chiefs head coach, Andy Reid has tended to have two quarterbacks to back up his starter. One of them has typically been an established veteran kept on the active roster. The other is usually a young developmental quarterback on the practice squad.

In 2019, that changed. Through training camp, longtime NFL veteran Chad Henne played the role of the established veteran, with rookie Kyle Shurmur and second-year player Chase Litton behind him.

But in the third preseason game against the San Francisco 49ers, Henne sustained a fractured ankle when he was sacked by Arik Armstead and Damontre Moore. The injury required surgery, which put Henne on injured reserve through Week 8.

So the Chiefs reached out to Matt Moore — who had been one of the quarterbacks the team had considered to back up Patrick Mahomes before the 2018 season — asking him to come out of retirement.

“When we made the final decision with Chad, [Moore] was the other guy, so it was kind of a no-brainer,” said Reid at the time. “To me, it was a toss-up. I like both the guys, so that’s what made this so easy. I would’ve taken either guy.”

Moore wasn’t needed until the Week 7 game against the Denver Broncos when Mahomes suffered a dislocated kneecap on a quarterback sneak at the goal line. Moore came in to finish the 30-6 victory in Denver and then started the next two games, playing well in a 31-24 loss to the Green Bay Packers and a 26-23 win over the Minnesota Vikings.

When Mahomes returned in Week 10, Henne was back from his injury. But the Chiefs elected to keep both backups on the active roster through the rest of the season. Shurmur — who had ended up winning the battle to be the practice-squad quarterback — went back to the taxi squad after spending two weeks on the main roster.

Speaking on Tuesday at the NFL Scouting Combine in Indianapolis, Chiefs general manager Brett Veach indicated that the team intends to go back to the usual routine in 2020 — and both Moore and Henne are in the mix.

“We’ve been blessed and fortunate to have two veteran guys that just did a tremendous job,” Veach told reporters. “Chad got hurt, and then Matt came out of retirement and played really good football for us. That Minnesota Vikings game that we won in the middle of the season was a big deal.

“We actually have two meetings scheduled with both of their representatives this week as well. We’ll see how that goes. I anticipate one of those guys being back. We’ll have to work through the dialogue with both their agents and see what makes sense for them and us.”

At this point, whether the Chiefs will choose Henne or Moore is impossible to say. But in 2020, there’s an additional wild card: with top-tier quarterbacks like Tom Brady, Philip Rivers, Dak Prescott and Ryan Tannehill — along with Jameis Winston, Marcus Mariota and Teddy Bridgewater — all potentially entering free agency, the possibility of a league-wide quarterback shakeup is there.

Some of them — perhaps even most of them — could end up returning to their 2019 teams. But if a significant number don’t, there could be a glut of former starters (and backups) looking for jobs. So while Moore and Henne are clearly the front-runners to serve as the Chiefs’ backup quarterback, we shouldn’t discount the possibility that another player could end up getting the job.