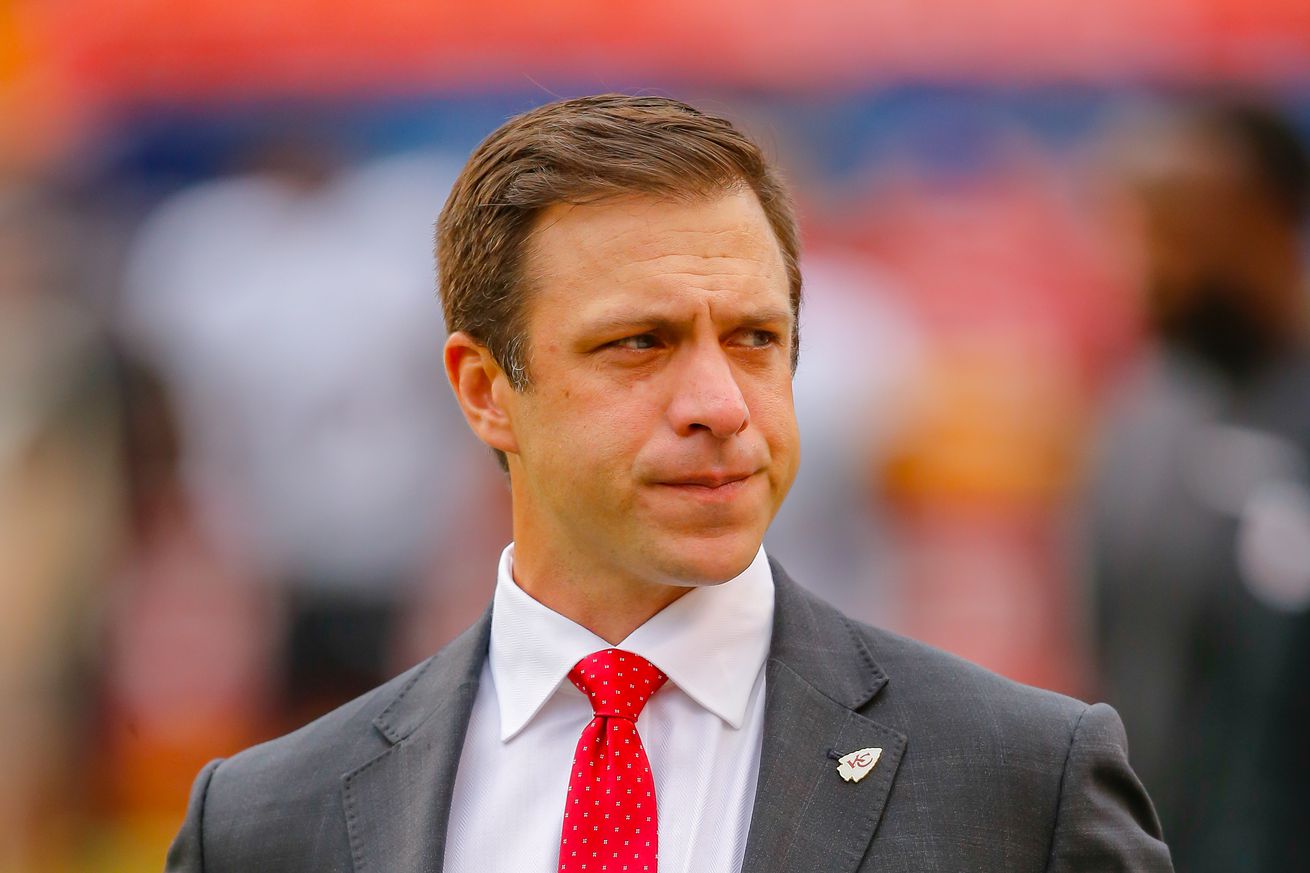 Old friend BJ Kissel of Chiefs dot com got 15 minutes to speak exclusively with the general manager on Friday.

Kansas City Chiefs general manager Brett Veach joined old friend BJ Kissel on the Chiefs dot com “In the Trenches” podcast on Friday. Veach won’t speak to the rest of the media until Tuesday morning at 11:15 a.m. Arrowhead Time from the NFL Scouting Combine in Indianapolis.

Many league analysts — both on the local and national stages — seem to have an opinion about defensive tackle Chris Jones these days. Jones just completed his final year of his rookie contract with the Chiefs after back-to-back seasons as the team’s sack leader.

The Chiefs have a few options when it comes to Jones, the consensus is that he will be franchise-tagged by March 10.

“Chris is obviously a great player and he’s a priority,” Veach told Kissel. “We have a lot of priorities and we know how hard it is to win a Super Bowl — hadn’t done it in 50 years, and we won it with the group we had last year. So I think that as we attack this offseason and first up, it’s free agency before the draft, our goal and our mindset is to do whatever we can to retain as many players as we can, and Chris is at the top of that list because of the talent he is. We have a lot of tough decisions to make, but our goal and our intent is to retain as much of this team and keep intact as much of this team as possible.”

Chiefs quarterback Patrick Mahomes, whom Veach first found as a member of the team’s personnel staff, is now coming off a Super Bowl MVP award just a year after winning the league MVP award. In addition, the Chiefs have posted 12-4 records in back-to-back seasons and won four straight division titles under Andy Reid.

Because of that success, Kansas City has become even more of a destination than it was last offseason.

“I think there’s no question — it helps,” explained Veach. “I think guys want to play on the biggest venues and they want to play when the lights are the brightest and they know that coming here, having the opportunity to play in front of our great fans, playing at Arrowhead. You’re going to get a lot of primetime games, you’re going to be on the national spotlight a bunch, so I think this certainly will help us and any ties that are, as we get closer to signing guys, I think that we’ll be able to confidently say we’ll win most of those ties.”

Veach and the Chiefs completely overhauled the defense last offseason when the team made the decision to flip the scheme by firing defensive coordinator Bob Sutton and replacing him with Steve Spagnuolo.

“You never know how exactly it’s going to work because you hadn’t had these guys in your building,” said Veach. “I think all locker rooms have different types of personalities, and I think that you can make different personalities work if you have one alpha, and that’s why Tyrann was so important and so critical.”

Mathieu played so well in 2019, he was named an All-Pro twice — on the first team as a defensive back and the second team as a safety. After winning Super Bowl LIV, there is a case to be made that Veach’s signing of Mathieu was the greatest free-agent signing in franchise history.

“We knew we wanted to create a culture, but we knew — and I think I said this in his introductory press conference — he was really the catalyst for our whole offseason… We have a lot of great players returning and we’re going to be aggressive, if we could get him to be another voice in the locker room, it would be critical to where we want to go. And we were able to bring him along, and then Frank Clark, and I think really throughout the course of the offseason and then to the draft and even during the season, our staff worked tirelessly to keep bringing in new talent here.

“But once these guys got in the building and once they got on the field, 32 made sure they knew who was in charge, and that was so critical.”

Imma go on a run that they will remember for the next 50 years. All heart & Want too.

It seems as though Veach, Mathieu and the Chiefs aren’t satisfied with just one Super Bowl.

Watch BJ’s full interview with Brett Veach above or by clicking here.