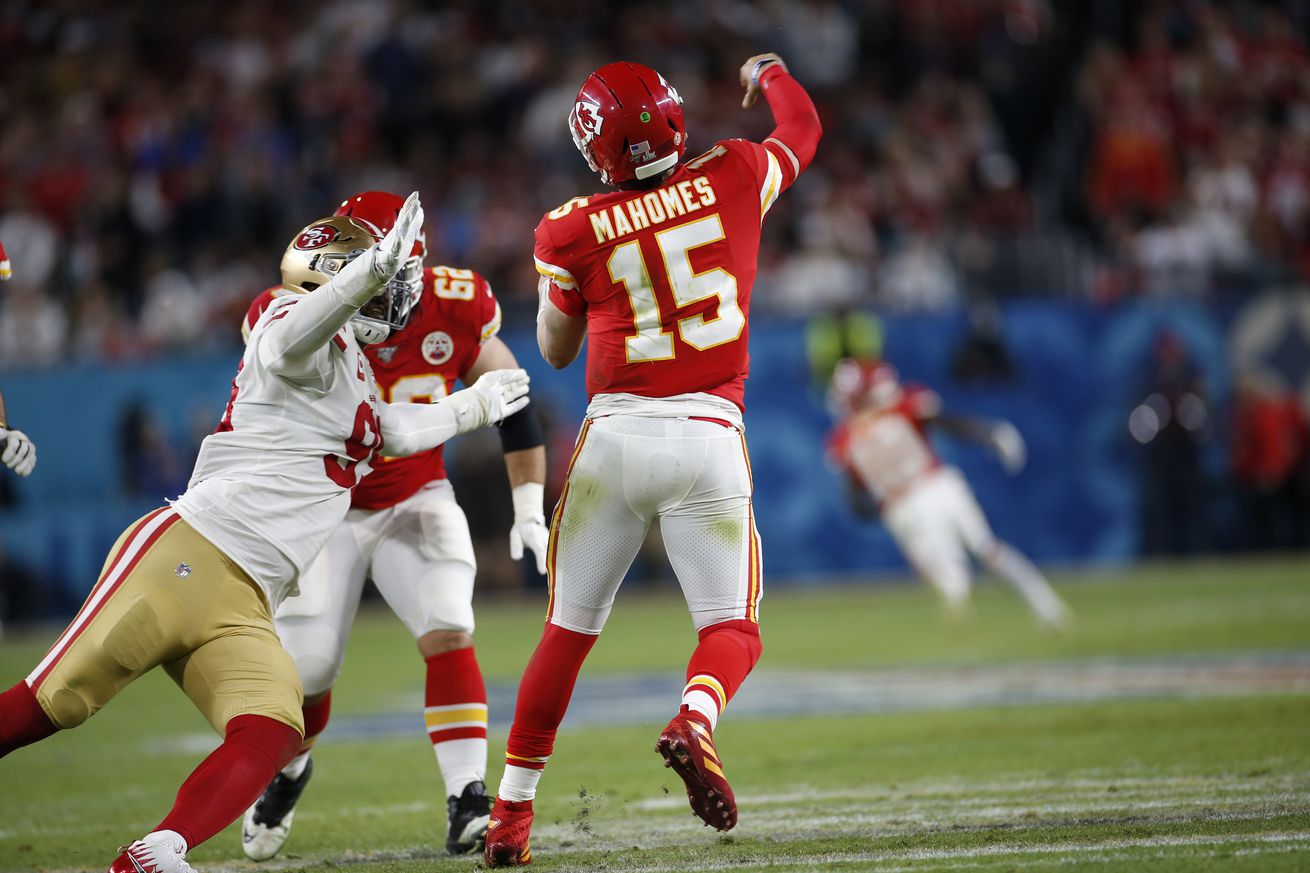 The ESPN NFL analyst sees the big picture pretty well, but is missing on some key details.

ESPN NFL analyst Bill Barnwell has been writing about five moves every team should make in the 2020 offseason. On Thursday, he published his takes on the AFC West.

Barnwell is convinced Watkins is simply too expensive:

He enters into the offseason with the largest cap hit for any wideout in football, but releasing the 26-year-old would free up $14 million in space for the team. After his playoff exploits, Watkins will have a robust market in free agency, but we have six years of evidence that he is a second wideout. The Chiefs also will likely lose Demarcus Robinson in free agency, so it wouldn’t surprise me if general manager Brett Veach went out and acquired a meaningful replacement in free agency or with an early draft pick to play alongside Tyreek Hill and Mecole Hardman.

With regard to Mahomes, Barnwell sees it as a question of timing:

Do the Chiefs sign him now or wait another year? Theoretically, they could enjoy one more year of Mahomes on a cap hit of just $5.3 million, roll over cap room to 2021 and then sign their star quarterback to a massive deal. That’s the path the Panthers took with Cam Newton and the Colts followed with Andrew Luck, who signed their deals after finishing their fourth pro season. Newton and Luck were the first two quarterbacks drafted with the first overall pick under the league’s current CBA, which created slot value contracts and drastically reduced how much quarterbacks at the top of the draft were paid on their rookie deals.

Aside from drafting a running back, Barnwell generally make solid points.

Too many national analysts are still focusing on the team’s release of Kareem Hunt almost 15 months ago. When healthy, Damien Williams has been more than adequate for a pass-reliant team like the Chiefs — and he has come up big in the most significant moments. If he can’t remain on the field, the team will still have Darrel Williams and Darwin Thompson — not to mention developmental prospect Mike Weber — behind Big Game Dame. With all the other issues to address — particularly at offensive line and linebacker, which Barnwell doesn’t address — it’s just hard to see the team making running back a big priority in the draft.

After that, it’s mostly a question of reordering Barnwell’s list.

Because they are so interdependent, the contract situations for Mahomes and Jones should really be listed as 1A and 1B. Much of what the Chiefs do will likely depend on the ongoing negotiations between the team and the agents of these two players — and between the team and other clubs.

If the Chiefs feel pressure to sign Mahomes before the season begins, that gives them less flexibility to sign Jones — depending on what kind of contract structure is being discussed with Mahomes’ camp. But if the Chiefs feel that they can defer making a deal with Mahomes until the next offseason — or perhaps more likely, under the new Collective Bargaining Agreement — it will be easier to sign Jones to a contract.

On the other hand, if the team is already getting feelers from other teams about a trade for Jones, they might instead shift their focus on Mahomes’ contract.

So as often happens, the Chiefs are facing a pretty complex situation — and what they will do will likely depend on things we can’t see. But as Barnwell suggests, applying the franchise tag to Jones could be the opening move to break the logjam.

Barnwell is right that the Chiefs will need help at cornerback. It may come from the draft or free agency — or perhaps both. Charvarius Ward, Rashad Fenton and Alex Brown are the only notable cornerbacks under contract for the coming season. Something will have to be done.

As far as Watkins is concerned, Barnwell’s data is correct. Viewed by itself, Watkins’ production doesn’t justify his 2020 cap hit. But as our Ethan Douglas showed us with his incredible analytical work this season, it’s not just a feeling that the Chiefs offense is significantly better when Watkins is on the field. Instead, it’s a fact.

That information — along with his production in two consecutive postseason runs —- needs to be part of the equation. Even allowing for that, Watkins could still be more of a burden in 2020 than the team can manage. The Chiefs could (and probably should) be considering a contract extension and restructure for Watkins.

Read Barnwell’s full offseason plan for the Chiefs — and the rest of the AFC West — here.