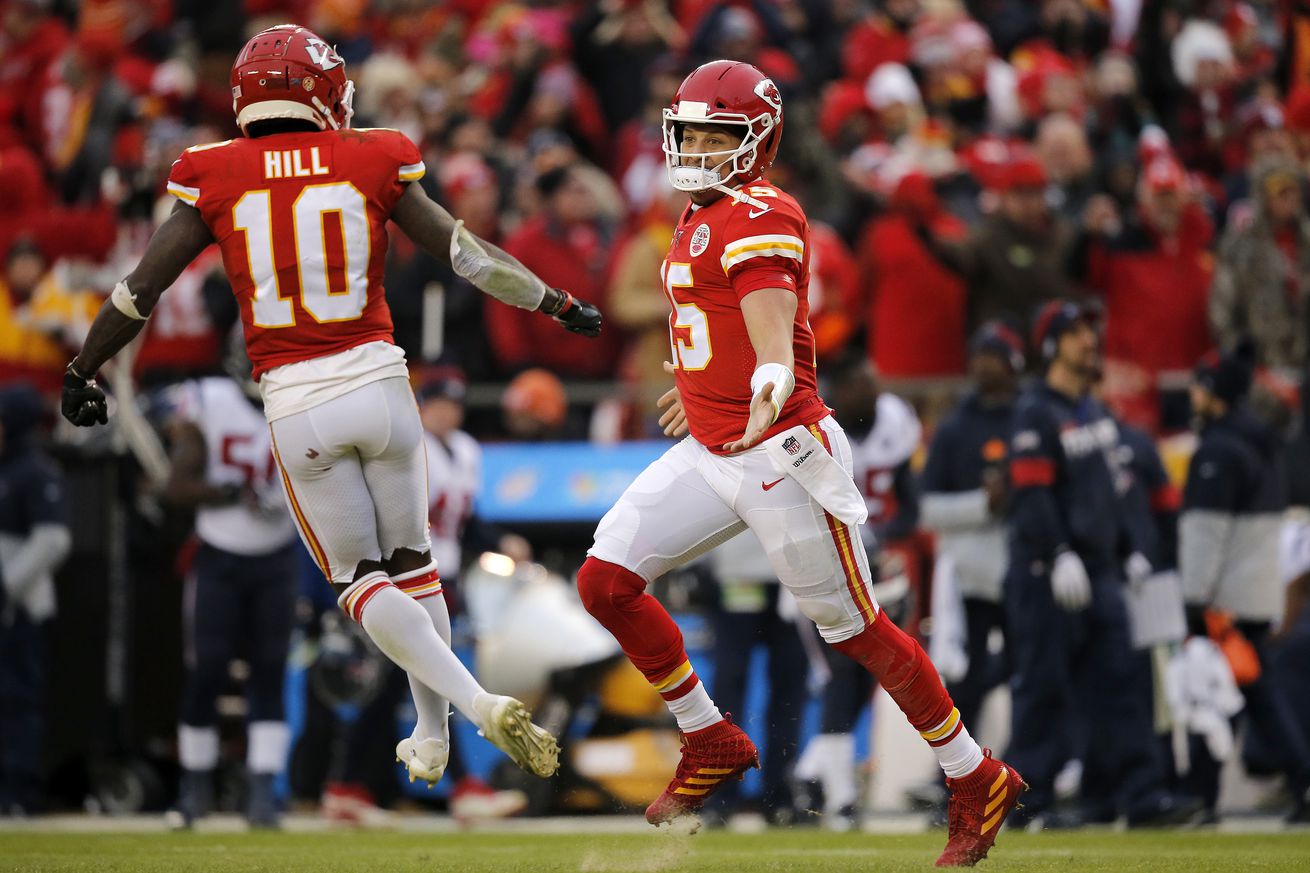 “Well, I’m not gonna say he’s telling a fib,” Hill said when asked about Jones’ comments. “But Chris Jones, he’s definitely — he’s definitely a man of his word, and we’re definitely creating something special here in KC, so I don’t see why not. Why say five? Why not go seven rings? Right now we’re just chasing [Michael] Jordan, so that’s what we do. So I’m going over five, and I’m saying seven.”

2020 NFL schedule: Here’s the one game for all 32 teams that could make or break their seasons | CBS Sports

Week 4 vs. Patriots. It’s tough to find a game on the Chiefs schedule that could “make or break” their season, but there is definitely a short stretch where things could get interesting. After traveling to Baltimore for a game in Week 3, the Chiefs have to turn around and play the Patriots at home in Week 4. A loss to the Patriots would potentially be devastating and that’s because it could kill Kansas City’s chances of earning a first-round bye in the playoffs (only one team in the AFC will be getting a first-round bye).

Kelce is coming off a monster 2019 that saw him finish in the top five in receiving yards (ranked fourth with 1,229). He’s the only tight end to accomplish that feat in this century. Kelce has proven himself to be a premier receiver for the Chiefs, year in and year out. The only thing keeping him from the coveted No. 1 spot is his unwillingness to block.

How will the defending Super Bowl champions handle success?

There’s no telling until the Chiefs get into training camp, particularly after an offseason like no other. But there’s little doubt that last year’s run to a title was fueled by the previous season’s bitter loss to the New England Patriots in the AFC Championship Game. Without that kind of motivation this time, will the Chiefs still be as driven? One factor in the Chiefs’ favor: They have a couple of strong locker room voices in quarterback Patrick Mahomes and safety Tyrann Mathieu. It’s unlikely they would tolerate any backsliding, so the Chiefs should be OK here. But the situation bears watching. Read more from Adam Teicher

Hunter made his NFL debut last season against the Indianapolis Colts and it went about as poorly as it possibly could have. According to Pro Football Focus, on 14 total snaps, Hunter recorded a 0.0 pass-blocking grade. He allowed instant pressure on QB Patrick Mahomes and failed to even get a hand on a defender during the game.

Hunter was ultimately waived from the 53-man roster as a result and would return to the practice squad. He was re-signed on a reserve/future deal following Super Bowl LIV. Yes, Hunter knows the Chiefs’ system, but they might want to cut their losses here and add a fresh face from the group of undrafted free agents.

When you talk about the Kansas City Chiefs, you’re going to be discussing a potential repeat as Super Bowl champions, Patrick Mahomes’ mega-extension, and a handful of other things before you get to Clyde Edwards-Helaire. If you’re a fantasy nerd like me, however, you already know exactly who the rookie running back is and what he brings to the table for the K.C. backfield.

For those not so much in the fantasy trenches, you’re going to want to know who Edwards-Helaire is because he has the potential to go off in 2020 in similar fashion to former Chiefs running back Kareem Hunt in 2017. The LSU product is perfectly situated for what the Chiefs want to do offensively as he ran for 6.6 yards a carry during his final season with the Tigers and caught 55 passes from Joe Burrow. Head coach Andy Reid even noted that he thinks he can be better than former Eagles great Brian Westbrook, who he coached in Philly.

That ability to be a factor in the passing and receiving game could produce similar results to Hunt’s rookie campaign where he led the league in rushing with 1,327 yards. That year he also caught 53 passes for 455 yards and was named to the Pro Bowl. He’ll have to beat out Damien Williams for the starting job, but the first-rounder could be in for a special season if things fall the right way.

What Nick Says: ”14-2 sounds about right. So where are the two loses? At Baltimore Week 3 … and then I also have the Chiefs losing at New Orleans in Week 15. However, here’s what noteworthy. The Chiefs finished last year with nine consecutive victories. The NFL record for consecutive victories is the ‘03-04 Patriots with 21 in a row.

“So, if they beat Baltimore in Week 3, it’s very possible that the Chiefs start flirting with that 21-game winning streak.”

The newly signed Chris Jones has been arguably the best interior player in the league outside of Aaron Donald over the past couple of seasons, and his 132 total pressures over the past two seasons is third among interior rushers. His pass-rush grade of 91.4 trails only Donald.

Frank Clark also got the big-money deal when the team acquired him from Seattle, but his first season was a letdown, seeing him register just 47 total pressures in the regular season before an uptick in the playoffs. His overall PFF grade for the season was just 63.0, and even those playoff performances were more flash than substance — he had five sacks across three games but did not earn a grade above 70.0 in any of them.

Outside of that duo, the situation is a little less encouraging. The team has a series of useful role players that grade solidly but nobody consistently making a difference and scaring opposing offenses. Outside of Jones, Terrell Suggs was the team’s best-graded pass-rusher up front, and his grade was just 66.9. With his departure, the team needs to find an additional source of pressure from somewhere.

After their exhibition game Wednesday against the Royals, the Cardinals tweeted the final score and tried to claim that their barbecue was superior to Kansas City’s.

This has already been settled.

In 2016, the Fox Sports affiliates in the two Missouri cities had a blind taste test and Kansas City’s barbecue beat St. Louis’ entry.

Perhaps the Cardinals are feeling self-conscious about having the longest championship drought among Missouri’s four professional franchises. Whatever the case, here is what the Cardinals tweeted:

While the team branding efforts are ongoing, according to Schefter, “The Washington Football Team will continue the process of retiring the Redskins name and hopes to be entirely rid of it on physical and digital spaces in the next 50 days, by the Sept. 13 regular-season opener against the Eagles.”

Reports indicate that the team will use these helmets and uniforms for the duration of the 2020 season, and will seek “the feedback of players, alumni, fans, sponsors and the community for the new team name it will use in the future.” Additionally, new merchandise for the “Washington Football Team” will be available for sale “in the coming days.”

Oakley and the NFL teamed up to develop the Oakley Mouth Shield, a device that is similar to its popular visors in that it can be attached to the helmet’s facemask, but different in that it attempts to prevent direct transmission of droplets. The shield is made of clear plastic with slits or holes in it that are designed to block a direct path of a droplet, while also allowing for breathing and verbal communication. It was first revealed in mid-July.

The NFL is leaving it up to the players to decide whether they want to use this safety measure while playing this season. Texans defensive end J.J. Watt was not a fan of such a concept, citing his discomfort while wearing a visor, which made him feel as if he couldn’t breathe due to a limited airway created by the plastic shield.

In his post Wednesday, which he directed at the NFL, Brown appeared to change his stance. He ripped the league for “dragging its feet” with its investigation and leaving him “in limbo?”

Your guide to the 2020 NFL offseason: Everything you might have missed

“The fact that you refuse to provide a deadline and the reason for the fact you won’t resolve your investigations is completely unacceptable,” Brown wrote. “I demand you provide me clarity on this situation immediately if you really care about my wellbeing. My legal team continues to ask and you provide no answers. How is it that the league can just drag it’s feet on any investigation it chooses on players and we just have to sit there in limbo?”

“I think the way I stay myself is, I just go out there and do whatever I can to help the team,” Tagovailoa said. “If helping the team looks like me being on the sideline and telling (Ryan Fitzpatrick) what I’ve seen, then that’s what it is. Or whoever the quarterback is out there.”

It should not come as a surprise to AP Laboratory listeners that I’m going with Byron Pringle as the sleeper for the Chiefs’ receiver room. At this point, it’s unlikely he gets major offensive snaps in Kansas City, which is disappointing. Any time he has, he’s performed well.

Pringle is a high-quality route runner with good size and speed, and it shows when he’s on the field. For a backup receiver, he’s uniquely effective at all three levels of the field but really shines underneath and in intermediate areas. His route running allows him to operate as a possession receiver that still has the speed to get over the top.

With the Chiefs bringing back Demarcus Robinson, it seems unlikely Pringle sees an uptick in snaps, but his roster spot should be safe. He’s a high-quality special teams player and arguably the second-best “X” receiver on the team behind Watkins. If something is holding him back mentally, this could be a season things finally click and he’s a more significant part of the offense. The worst-case scenario is he fills the same insurance role he did in 2019.

Tyreek Hill is at the Boys & Girls Club of Kansas City handing out and signing backpacks. Been challenged to two races by 6-year-olds so we’re on brand. pic.twitter.com/xpJfERoRxc