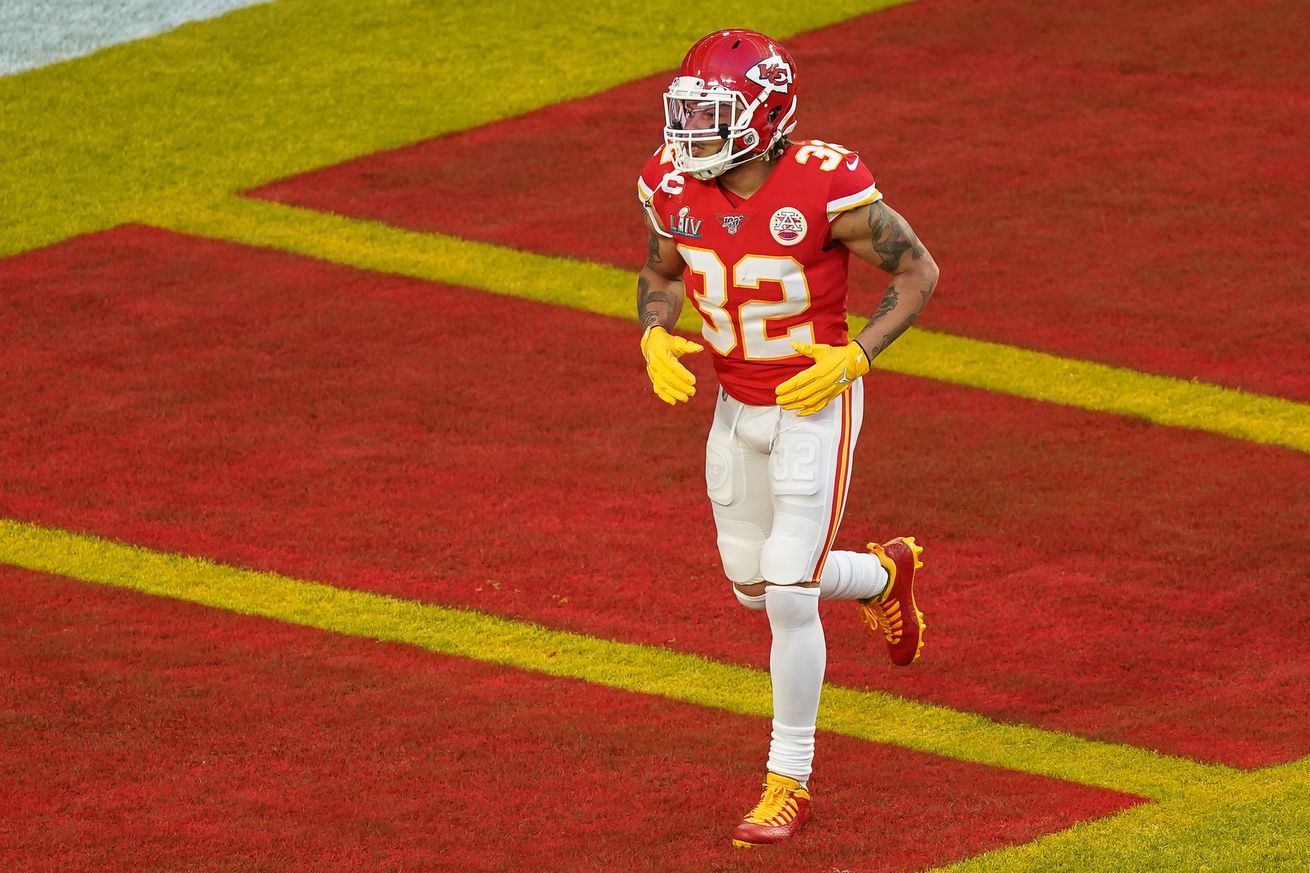 There’s no honey in this badger, folks.

Winning his first-ever Super Bowl in 2019 was the culmination of a career’s worth of stellar work, even though it also involved teams recently making the ill-advised decision to let him walk. All Mathieu does is change games and, like Fitzpatrick, he does it in a variety of ways. What sets Mathieu apart, however, is just how long he’s been stellar at his craft — since entering the NFL as a member of the Arizona Cardinals in 2013. And for all he excels at, what’s often lost is that he’s a former third-round pick, and not someone who was selected with a premium pick and expected to take over the league. And yet, here we are seven years later, with Mathieu being a key reason the Chiefs ended a half-century long championship drought, his four interceptions, 75 combined tackles and 12 pass break ups in the regular season helping them to secure home field advantage.

Those numbers were good enough to see him awarded another First-Team All-Pro honor to go along with his shiny new ring, and he earned both as much as he earned the right to top this list. For whether you need a free safety, strong safety or nickel corner — this former Tiger is … well … great.

Word to Tony and his Frosted Flakes.

The betting public is hammering Chiefs wagers right now. Here are the ones they like | Kansas City Star

The Chiefs are favored in 14 of their 16 games this season, per BetOnline. They’ve never won 14 games in a single regular season. They are a slight underdog in Baltimore in Week 3 and at New Orleans in Week 15.

The home schedule is quite generous to Kansas City, with the Chiefs labeled a double-digit favorite in seven of their eight games. The oddsmakers have favored Baltimore in all 16 games.

A $21M annual salary would make Jones one of the three highest-paid defensive players in the league, behind only the Chicago Bears’ Khalil Mack ($23.5M) and the Los Angeles Rams’ Aaron Donald ($22.5M). Up to this point, however? K.C. hasn’t budged.

Hence Jones steering clear of the Chiefs’ virtual offseason program, with July 15’s deadline for tagged players to finalize a long-term agreement fast approaching. Not much figures to change in the coming weeks, with K.C. unable to fully project 2021 cap space and firmly committed to its Super Bowl-winning QB above all, so Chadiha foresees a “serious game of chicken” between the two sides.

The Chiefs have the second-worst salary cap situation in the league at roughly $3.57 million. While they can still afford to pay Jones what he’ll command on the tag, Chiefs general manager Brett Veach must accept he has at least two guys very close to next in line to get paid: Super Bowl LIV MVP quarterback Patrick Mahomes and perennial Pro Bowl tight end Travis Kelce.

Mahomes is still on his rookie contract and has been extended the fifth-year option. Giving him a bump in pay before year four in the league out of Texas Tech makes sense, but in these strange times, Veach doesn’t technically have to pay him right away. The Chiefs could technically tag Mahomes in 2022 if they absolutely had to. Doing so would have major karmic implications.

This perception plays out perfectly for the Chiefs. As quarterback needy teams come to the table for the 2022 offseason, Rosen is going to be scheduled to be a free agent. At that point, he will be a long-term castoff from the Miami Dolphins sitting behind not only Tagovailoa but Ryan Fitzpatrick as well. But if the Chiefs were to swing a deal for him, he suddenly becomes an intriguing add.

Keeping Henne on the roster at this point is great for experience, for continuity, for some veteran leadership. He’s earned the trust of Chiefs coaches at multiple points now, even after seeing the job that Matt Moore did in relief of an injured Mahomes and Henne. That needs to be noted here.

However, it’s also important to note that Rosen still comes with that recent first round pedigree—and a top 10 label at that. If he were somehow able to rehabilitate his image, to learn and grow from the best in the business—both coach and quarterback—then the value could be there for a beautiful asset flip on Veach’s part.

The Cowboys offense would have been out of this world if it featured Kelce and Allen with names like Dez Bryant, Demarco Murray, Tony Romo, Jason Witten, Ezekiel Elliot, Dak Prescott and Amari Cooper.

The Washington Redskins are removing George Preston Marshall’s name from their Ring of Fame at FedEx Field, according to a team spokesman, less than a week after his statue was removed from their former home. Marshall was the last NFL owner to integrate his franchise.

The Redskins also will remove him from their history wall outside the locker room at their practice facility.

Mailbag: Which Quarterbacks Are Under the Radar Heading Into 2020? | SI

First, I feel like the return of Ben Roethlisberger, strangely, hasn’t been discussed much, as compared with how other quarterbacks’ prospects for 2020 have been dissected, and I actually think he’s set up nicely going into the fall. The Steelers learned to win without him last year, after having become more reliant on him over the years, and the defense he’ll play with in ’20 figures to be the best he’s had with him in almost a decade. That’ll make it easier for the Steelers to control the pace of games, and ask less of their 38-year-old leader.

180-plus rookies, including 29 of 32 first-rounders, remain unsigned | NFL.com

A month before rookies are scheduled to report to training camp, more than 180 draft picks remain unsigned, including 29 of 32 first-rounders, NFL Network’s Tom Pelissero reported, per an NFLPA memo.

Some teams continue to tell agents they’re waiting to conduct physicals at club facilities, which remains barred because of COVID-19.

Tua Tagovailoa is the top pick who has signed his rookie deal, along with fellow Dolphins first-rounder Austin Jackson. Panthers DT Derrick Brown is the other first-round selection to sign his deal.

At a basic level, the NFL must ensure that each team has enough healthy players, at the right positions, to play credible games for 17 weeks. That almost certainly means an expansion of practice squads from the current limit of 12. It could also lead to a separate roster classification for players who are sidelined by the coronavirus, whether they tested positive, are showing symptoms or are quarantined. Otherwise, coronavirus-afflicted players would need to be carried on the 53-man active roster or placed on injured reserve, from which teams can activate only three players per season.

NFL 2020: Which players will bounce back and who will struggle to reach their usual heights? | CBS Sports

He was a legit MVP candidate before injury struck last year. And he was a legit MVP candidate before his season was shut down, despite playing through some painful injuries. He and Darrell Bevell had something special going and I like where this offense is headed. Stafford’s arm remains among the best on the planet and he is as tough as they come and I like the pieces around him. At some point that rushing attack has to get at least a little better to help the QB out. He is still very much in his prime and I believe picks up right where he left off.

Remembering the power of Fitzmagic in Kansas City

It’s a shame that the Chiefs can’t play the Dolphins in Kansas City so that Chiefs fans would have the opportunity to honor one of the heroes of their run to Super Bowl LIV.

Quarterback Ryan Fitzpatrick and the Dolphins were given next to no chance of upsetting the Patriots. The Chiefs needed a healthy dose of Fitzmagic — and got it.

Has Patrick Mahomes already done enough to be the number 1 overall draft pick in a redraft of every football player that has ever played the game? If not him then who?