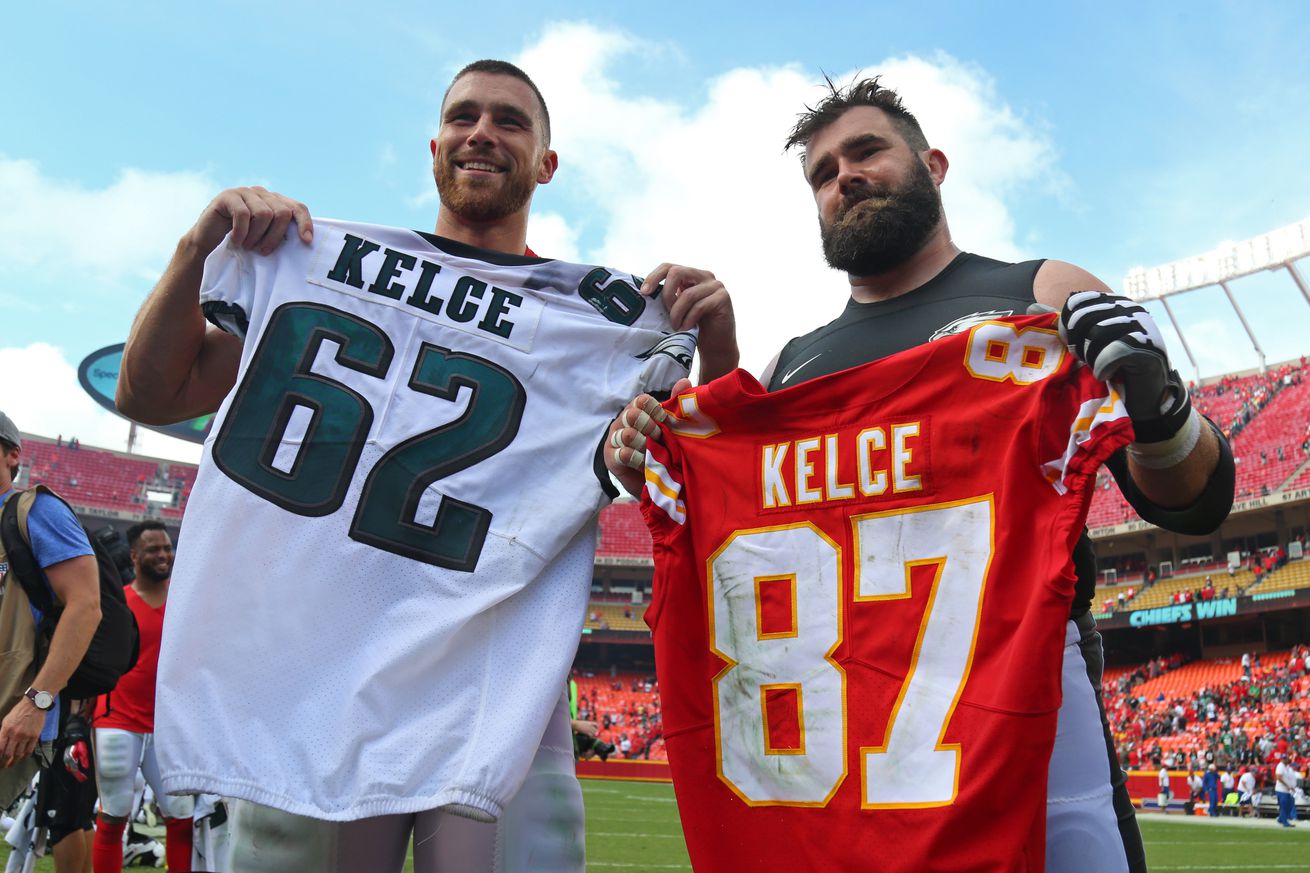 Coombs remembers Jason walking into a coaches’ meeting that season, tears in his eyes. He was there to stake his substantial reputation on getting his brother back in the fold, and he came armed with a straightforward argument. “Basically, it was, I’ve got this, and you’ve got to trust me on this,” Coombs says. “You’re talking about a man who had earned the right to give his word and have his word listened to.”

“I never really asked him how he got me back on the team,” Travis says. But he returned for his junior season in 2011 as a full-time tight end and made the dean’s list that fall—“which was unheard of,” according to Ed. In ’12, Travis broke out, catching 45 passes for 722 yards and eight touchdowns; the following spring, the Chiefs drafted him in the third round. “That was my brother just being a big brother,” Travis says, “looking out for me every step of the way and fighting for the success story.”

Why DeAngelo Hall chose Patrick Mahomes: We’ve seen Mahomes dominate since he took over as the Kansas City Chiefs’ starting quarterback two seasons ago. Why should this year be any different? And while some might think there’s got to be some sort of letdown on the horizon — after being league MVP in 2018 and Super Bowl MVP last season — Mahomes’ talent and familiarity with his supporting cast and Andy Reid’s offense keep him at the very top of his position — and the NFL in 2020.

Andy Reid spent a first-round pick on a running back. Edwards-Helaire was going to receive the lion’s share of touches in Kansas City’s offense regardless of Damien Williams’ decision to opt out. The LSU product has a low center of gravity and a strong base. He is explosive in the run game and dazzling in the pass game. Patrick Mahomes will be able to trust him as a pass protector. There is an argument that the Chiefs will not want to push too much onto the plate of the rookie but the national champion can handle it.

Fellow running backs D’Andre Swift (Lions) and Jonathan Taylor (Colts) are in situations where they will likely have to share carries with a veteran. It is difficult envisioning a rookie running back getting the type of touches that it required for Jacobs to even be in contention last year.

Breech: Chiefs -450. Betting on the Chiefs to win the division feels like free money, so I’m going to take it, even though there isn’t really any value in their odds. Although I won’t make a huge profit when I hit my bet on Kansas City, I’m going to make up for that with the odds on my other playoff pick.

Everyone can be honest and acknowledge the Chiefs are the league’s best team and have a great chance to win the AFC West for the fifth straight year. That’s why they’re -455 to do so. Even so, two of B/R’s writers—Davenport and Miller—weren’t fazed by such a high risk and chose the Chiefs.

Gagnon, Kahler and Sobleski rode with the upstart Denver Broncos (+900), whose odds are greater than the Los Angeles Chargers’ (+800) even though the Chargers have serious concerns at left tackle and Derwin James Jr. suffered another injury. They also could start a rookie at quarterback.

The Broncos are further along than expected. Quarterback Drew Lock, a second-round pick in 2019, entered the lineup and played well with Denver finishing 4-1 down the stretch. General manager John Elway went into the offseason looking to improve Lock’s supporting cast and maximize his potential. The Broncos signed running back Melvin Gordon and guard Graham Glasgow in free agency and then drafted wide receivers Jerry Jeudy and KJ Hamler. It’s a promising group to complement an always stout defense.

The Chiefs are who they are (reigning Super Bowl champions), but the Broncos have the potential to be very good.

Tom Brady and the Art of Reinvention | The Ringer

For about an hour before or after most practices, Brady, Kirby, and another teammate would work on throws and timing together. They’d repeatedly run the curls, outs, and fades that were staple throws in Serra’s offense, Kirby said. Brady’s work ethic has been mythologized plenty, but beyond the benefits of muscle memory, he was trained in an offense well ahead of its time, one that prepared him for where he, and the NFL, were heading.

Football Outsiders has tracked quarterbacks by routes thrown since 2016. In each of the four seasons for which there’s data, the two most popular routes targeted in the NFL were curls and outs. With the exception of last year, Brady’s DVOA rating has generally been several points above league average on those throws.

If Aaron Donald didn’t exist, then Cox would likely be the best interior defensive lineman in the NFL for several years now.

His sack total of 3.5 was lower than normal last year, but the five-time Pro Bowler was still disruptive and is just two seasons removed from having 10.5 sacks and 34 quarterback hits from the defensive tackle position. Graham, Cox’s long-time partner in crime, has been an underrated producer off the edge for quite some time, including an 8.5-sack season last year.

Joining the two veterans is Barnett, who has generally fallen short of expectations as a first-round pick in 2017 but has still been a solid pass rusher, reaching a career-high 6.5 sacks in 2019. Cox’s down year and neither Eagles edge rusher having reaching double-digit sacks in their careers hurts Philadelphia’s case here, but they still have put forth a formidable trio when it comes to getting to the quarterback.

Fred Warner, 49ers linebacker: Warner became the first notable name placed on the COVID-19 reserve list in weeks on Monday. The third-year pro was reportedly having a standout camp and appeared ready to take another step in his development, all the way up to Bobby Wagner-level middle linebacker play.

This is especially disappointing for the 49ers because it comes so close to the season, with San Francisco already having been ravaged by injuries throughout the roster. No other team has so many key players banged up: Nick Bosa, Dee Ford, Deebo Samuel, Brandon Aiyuk, Kyle Juszczyk and multiple centers, among others.

Wide receiver Josh Gordon’s championship ring from Super Bowl LIII, which he was gifted by the New England Patriots despite not playing in the game, has sold for $138,000 at a sports auction, according to SportsCollectorsDaily.com.

Gordon, 29, played in 12 games for the Patriots in their 2018 Super Bowl championship season but was suspended by the NFL in December of that year and missed the playoffs, which included a 13-3 victory over the Los Angeles Rams in Super Bowl LIII.

Mathieu has an impact from a variety of spots. He actually lined up more times last season as a slot corner (411) than as a free safety (359). It’s why he was named All-Pro as a defensive back and not a safety. He also was a linebacker on a significant number of plays (223). — Adam Teicher

What they are saying: “He’s kind of fun to be around. He’s [all] business. He shares that with the guys around him. He has those instincts, you can’t teach that part.” — Andy Reid, Chiefs coach

It’s proper that Mathieu has rocketed up 50 spots from his 2019 ranking; it may be that no player in the league combines high-level versatility and leadership more effectively than he does. It’s becoming more and more likely that decades from now, the story of the Chiefs from this period will begin with the acquisition of Mahomes in 2017 and Mathieu in 2019. In Steve Spagnuolo’s defense, Mathieu has found his home.

Several Chiefs Kingdom Kids members wrote letters to the team over the last few weeks wishing them luck this season.

Here are a few of the best. The Wasp play design is particularity impressive. pic.twitter.com/b10324Agvc