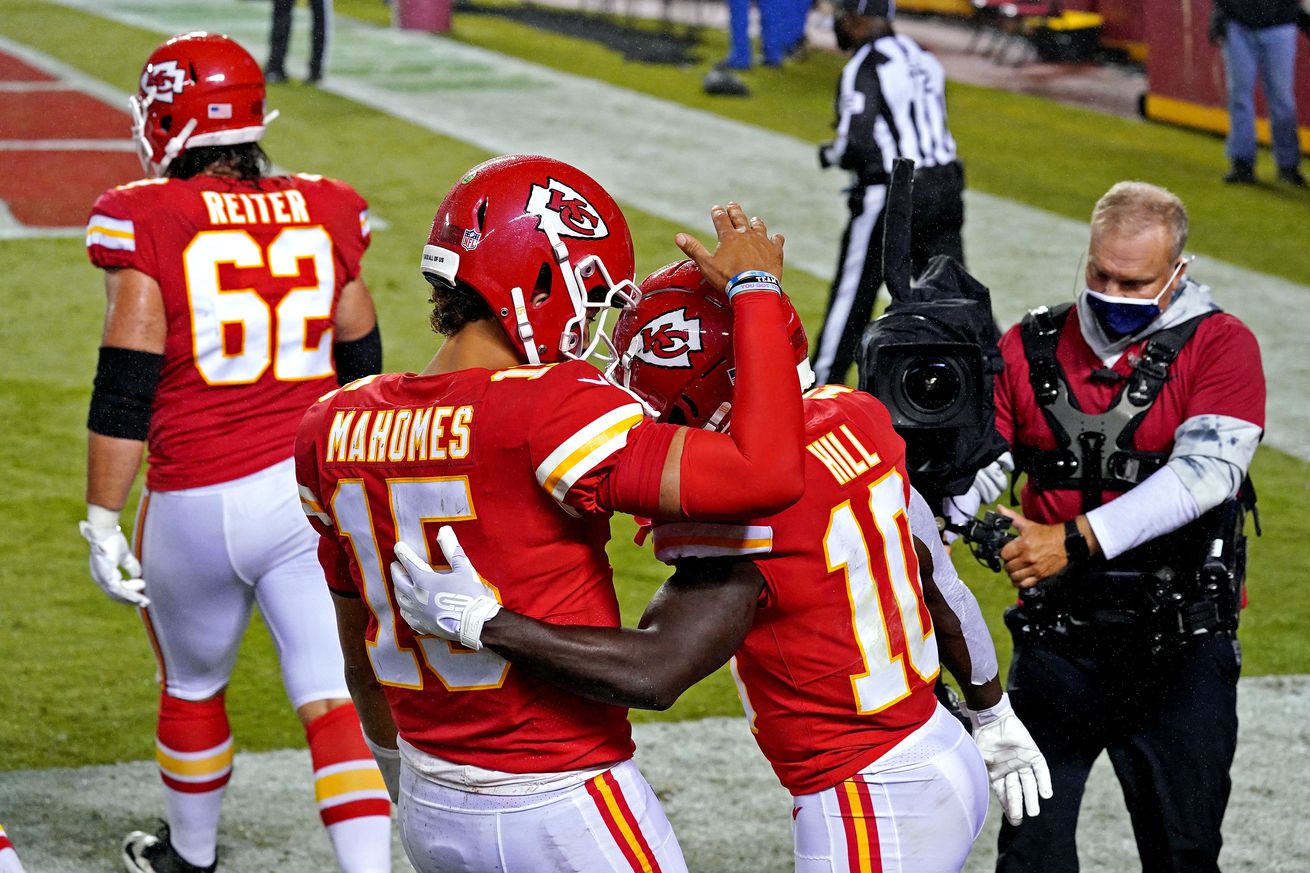 Acho said, “Only person that can stop the Chiefs are the Chiefs themselves….Man, it was beautiful watching that game yesterday, Marcellus, because we already knew about Patrick Mahomes and how great he was.

“We knew how great this Chiefs offense was and they continue to get better. Patrick Mahomes, what’d he give us yesterday? Three TDs, only gave us one sack…he hit Watkins, he hit Kelce, he hit Hill. Everybody he wanted, he got,” Acho said on the show.

If you were on Twitter during Thursday night’s game, the timeline seemed to be split 50/50: one half was non-LSU Twitter saying “oh my God Clyde Edwards-Helaire is awesome,” and the other half was LSU Twitter was all telling the first half “yes, we know.” Twitter is usually terrible 99 percent of the time, but last night it really felt like Tiger fans across the country were all celebrating and congratulating Clyde. If it felt like he was dominating your social media feed, it wasn’t just you; last night “Clyde” was the No. 8 trending topic on Twitter. That’s cool as hell!

Omameh, 30, spent the 2019 season with the New Orleans Saints. He appeared in 14 games, starting at left tackle in their Week 11 road win against the Atlanta Falcons during Thanksgiving. He also filled in at left guard on occasion for New Orleans. An undrafted free agent out of Michigan in 2013, Omameh has started a total of 57 games during his career. Most of his experience comes playing guard, but he has the ability to play tackle in a pinch. The Saints released Omameh during their final roster cuts.

Leglue, 24, was also released by New Orleans during 53-man roster cuts. Leglue was originally signed by the Broncos as an undrafted free agent out of Tulane in 2019. He was released and spent most of the 2019 season on the Saints’ practice squad before he was poached by the Green Bay Packers late in the season. The 6-6 and 301-pound offensive lineman has the versatility to play tackle or guard.

“We’re trying to get into a situation where we’re trying to keep Dak surrounded by good players,’’ Jones said on Friday on the eve of Dallas’ Week 1 NFL season-opener Sunday night at the Los Angeles Rams. ”The only thing Dak is missing from Patrick Mahomes is winning that Super Bowl. That’s what we want for him.’’

Wait a minute. Back up.

While our colleague Bryan Broaddus’ question (on “G-Bag Nation’’ on 105.3 The Fan’’ was actually must more “meandering’’ than, “Why isn’t he signed?’’ … and while Jones’ answer was lengthy as well …

“The only thing Dak is missing from Patrick Mahomes is winning that Super Bowl.’’

By the end of the game, the Raiders had scored 34 points despite the rotation at tackle. And even more shocking — Derek Carr was not sacked. Not once.

“Injuries happen and things happen and things happen and we went down to Denzelle Good playing right tackle, which I’ll let the coaches tell you how many reps he’s had at right tackle,” said Derek Carr, who gushed about how much he loves his linemen. “I think he did a pretty good job against some pretty good players. So, anytime I don’t get touched and we run the rock well, everyone should be praising the offensive linemen and giving them free food.”

Let it be known that this will be more of a work in progress than anybody expected. Brady actually threw two interceptions on the day, while completing 23 of 36 passes for 239 yards and two touchdowns. The Bucs’ defense did play fairly well — as they held the Saints to just 271 total yards — but special teams was a disaster. New Orleans blocked one field-goal attempt and also recovered a pooch kickoff when two Bucs players ran into each other while trying to field the ball.

These were the types of comical errors that were supposed to vanish with Brady’s presence. The truth is that the Bucs very much resembled a young team still trying to find its own continuity after COVID-19 ravaged offseason practice time for every franchise in the league. Bucs head coach Bruce Arians had worried about special teams mistakes earlier in training camp and he got them. Brady had voiced his own concerns about miscommunication, and his first interception resulted from him and wide receiver Mike Evans misreading the Saints’ coverage.

NFL Week 1 grades: Seahawks get an ‘A’ for letting Russell Wilson cook, Cowboys earn a ‘B-’ despite loss | CBS Sports

No doubt fueled by the team’s decision to use a top pick on quarterback Jordan Love, Rodgers entered the Week 1 matchup with the Vikings with more than the usual vitriol toward a rival NFC North team. Combine those two things, however, and you get prime Rodgers, who completed 32 of 44 passes for 364 yards while adding four touchdowns and no interceptions. It was clear who his nuclear weapon would be going in, and Davante Adams did not disappoint. Adams flat out mauled the Vikings on their own field, grabbing 14 catches on 17 targets for 156 yards, and was basically the gingerbread man for much of the game as the Packers passing attack had their way at M&T Bank Stadium. Once Rodgers got started, there was nothing that could stop him, and the Vikings suddenly became nothing more than a wet paper bag trying to stop a missile en route to losing their third straight to the rivals from Wisconsin.

“I’m mad at myself that I let him go back in there in the second half,” Gase said after the Jets’ 27-17 loss to the Buffalo Bills in Orchard Park, New York.

Bell was hurt late in the second quarter when he fell awkwardly on an incomplete pass in which he drew a holding penalty on linebacker A.J. Klein. He returned in the second half, his hamstring wrapped. He stayed in for five plays before it became apparent that he had no burst.

Brees left Orlando, Florida, the site of the Pro Bowl, and met with television networks, operating as if his playing days were over, according to sources.

But ultimately, sometime shortly before or during the coronavirus pandemic, Brees changed his mind and decided to play, although New Orleans wasn’t certain that would be the case until the second week in March, according to sources.

Knowing that Brees, 41, nearly walked away from playing quarterback after last season, it’s hardly a stretch to think he will do the same after this season. Brees already has agreed to join NBC Sports as a football analyst when his playing days are over. Brees has operated on a year-to-year basis with New Orleans.

Meanwhile, Pro Bowl cornerback Patrick Peterson has one year left on his contract at just over $12.5 million. After that, it could get interesting.

With the cornerback market rising steadily, sources say Arizona has had no recent talks with Peterson about his contract and none are scheduled. With Week 1 today — the Cardinals debut against the San Francisco 49ers at 4:25 p.m. ET — Peterson gets another vested season under his belt. Assuming contract talks stay where they are, Peterson may be on his way to becoming an unrestricted free agent.

Patrick Mahomes’ birthday is coming up; here’s how you can help him celebrate

Join @PatrickMahomes & a star-studded cast to support 15 charities. Our goal: 1,500 donations at a minimum of $15.

15 and the Mahomies — Patrick Mahomes’ foundation — has announced that it will hold a virtual event celebrating Patrick Mahomes’ 25th birthday. “Birthday With The Mahomies” will be streamed online on Wednesday, September 17 at 7:30 p.m. Arrowhead Time.

The birthday celebration — which will include messages from Arrowhead Pride reader Paul Rudd, Quincy Jones and several of Mahomes’ Chiefs teammates — will be streamed online. There will also be a live auction featuring memorabilia and one-of-a-kind experiences.

Every wanted to give the reigning Super Bowl MVP something for his birthday? Well, the organization has set the goal of collecting 1,500 donations (at a minimum of $15) to raise funds for its participating charities:

THE SEAHAWKS ARE THE BEST TEAM IN THE NFL pic.twitter.com/yEh0YKf19e