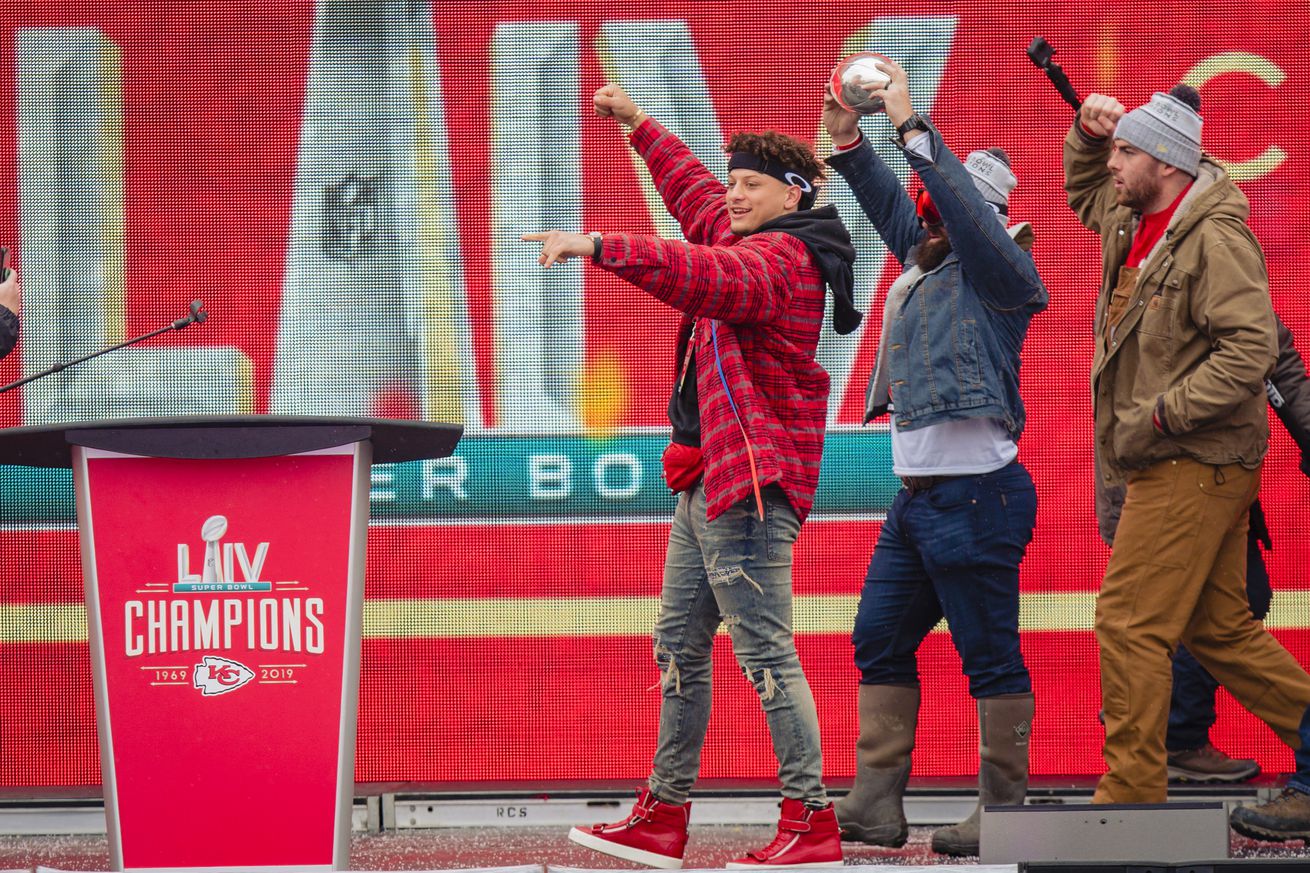 Even without the COVID-19 pandemic’s influence on the NFL’s future salary cap, Derrick added, the Chiefs were likely going to hold off and maneuver their own cap

situation for the benefit of both sides. Mahomes, meanwhile, is already under contract through 2021 thanks to the Chiefs exercising their fifth-year option on the former first-round pick.

“Especially in the next season or two, they are really tied up, as far as what they’ve got committed,” he said. “They need to be able to find a team-friendly deal and still get him his money … I think all along they’ve known it was going to be after the 2020 season.”

One way the Chiefs could end up compensating Mahomes as the NFL’s top young QB, Derrick said, is via a contract based strictly on a percentage of the team’s total cap — something that’s yet to be executed in the NFL. In any event, the reigning Super Bowl MVP is a sure bet to reset the QB market and become the league’s highest-paid player.

Earlier, Bleacher Report posted a video where they experimented with the Madden NFL game. This time, the experiment was pitting a team full of Patrick Mahomes avatars against a team full of Lamar Jackson avatars. Kansas City Chiefs player, Tyreek Hill, commented on the video and clearly found it hilarious.

The game was an interesting affair, with Jackson’s avatars playing dirty occasionally. Jackson’s side even had two players sent off the field for aggressive behavior. In spite of this, the Lamar Jackson clones surged ahead when the scores were level at 7-7.

I really just sat and watched this https://t.co/LrhavIOIFl

Tyreek Hill thinks he’d crush this college football player in a footrace, but we’re not so sure | For The Win

Kansas City Chiefs receiver Tyreek Hill opened himself up for a challenge in a footrace on Twitter Thursday. And perhaps he invited a legitimate contender.

Adam Theilen was among those interested. But another compelling competitor emerged: Anthony Schwartz. He’s a college sprinter and wide receiver for the Auburn Tigers. While he has no official 40-yard dash time, Schwartz’s personal best on the 60-meter is 6.59 seconds, which is better than what Hill ran in track at Oklahoma State in 2014 (6.68 second).

Chris Simms: “There is NO weakness to Mahomes game…I’ve never seen anyone like him in my life!” pic.twitter.com/cmlCADt6Dg

Here’s where it gets really sticky. The Chiefs are going to have a hard time working out a deal with Jones until they know what they have to pay Mahomes in the near future. There’s also the likelihood that next year’s salary cap is going to be either flat or significantly lower than this year’s cap if COVID-19 restrictions result in fewer or no fans being allowed at games. As much of a wild card as the Mahomes negotiation is with regard to the Jones contract situation, it’s even more unsettling for both the Chiefs and Jones to have no idea what kind of budget the team will be working with in 2021.

This is all setting up as a serious game of chicken. The franchise tag given to Jones means the Chiefs are on the hook for $16.1 million this season. If he doesn’t sign the tender by the July 15 deadline to strike a multi-year contract extension and decides to hold out, then Kansas City GM Brett Veach is going to have a hard time making the kind of emergency roster moves he made last season to aid that Super Bowl run. On the flip side, Jones has to gauge where the market is heading. He can follow in the footsteps of other stars who ultimately found their own freedom after not signing their franchise tags by the aforementioned deadline — like Jets running back Le’Veon Bell (who sat out the entire 2018 season) and Clowney (who signed his tender after he approved the Seahawks as his destination via trade last offseason) — but that route involves potentially foregoing a sizable paycheck for a long time.

Mahomes went from the league’s most dangerous and prolific QB to becoming its most clutch with his incredible closing performance to beat the 49ers in Super Bowl 54. He battled through a knee injury to come back faster than most would to keep up his special all-around play. With one ring on hand and still only 24, Mahomes is the new premier face of the NFL.

What are the odds the Chiefs trade for Jets DB Jamal Adams? | Chiefs Wire

BetMGM has released betting odds for all 32 NFL teams to land the superstar safety in trade. The Chiefs, after being named as one of the preferred trade destinations of Adams, have 20/1 odds of landing him in trade. Those aren’t great odds in comparison to some of the leaders. The Jets are favored to keep Adams at 3/2 odds, while the Dallas Cowboys are 11/2 favorites to trade for Adams.

Bill Belichick Has a Plan for the Long Game, With or Without Tom Brady | The Ringer

On offense, it begins with the running game. The Patriots offense has been quietly reshaped for the last two years to prepare for Brady’s decline and his eventual departure. In 2018, New England refocused its offense around its running game and finished with the NFL’s fifth-best rushing attack. That output increased in the playoffs as the Patriots scored nine rushing touchdowns, including the decisive score against the Rams to win Super Bowl LIII.

That offense wasn’t replicated in 2019, though that was due to circumstance, not design. New England’s starting center, David Andrews, missed the year because of blood clots in his lungs, and fullback James Develin played only two games because of a neck injury that sent him to injured reserve and then an early retirement this offseason. Develin was in for more than 40 percent of the offensive snaps in six of the Patriots’ last nine games in 2018 and was the lead blocker for all nine rushing touchdowns in that season’s playoffs. The hit the 2019 offense took when it lost him was made obvious by how hard the team tried to replace him.

Safety Tony Jefferson was released and offensive guard Marshal Yanda retired. An inauspicious start to the offseason would eventually turn in their favor. Baltimore franchise-tagged outside linebacker Matt Judon and acquired defensive end Calais Campbell in a trade with the Jaguars. Backup tight end Hayden Hurst was sent to Atlanta for the pick used to select Ohio State running back J.K. Dobbins.

The Ravens added functional depth before completing what was widely-regarded as one of the best draft classes in the NFL. The crown jewel was LSU inside linebacker Patrick Queen, who will give the AFC North franchise speed and physicality at the heart of the unit. Wide receiver Devin Duvernay, inside linebacker Malik Harrison, defensive tackle Justin Madubuike and the aforementioned Dobbins all have starting traits. Baltimore and quarterback Lamar Jackson have fallen in the opening round of the playoffs each of the past two years. The roster is nearly flawless and the only opponent standing in their path is themselves.

This is the latest in the Brees’ efforts to be “allies” for the Black community and “part of the solution” in the fight for racial equality and social justice.

They vowed to do so earlier this month after the quarterback’s comments about “disrespecting the flag” by kneeling during the national anthem caused widespread backlash. Brees later apologized multiple times and said he gained a greater understanding from friends and teammates about why his comments “completely missed the mark.”

Brees followed up with an Instagram post addressed to President Donald Trump, saying, “We can no longer use the flag to turn people away or distract them from the real issues that face our Black communities.”

NFL teams to block off seats closest to field, cover them with sponsor logos | YardBarker

No final decision has been made about how many fans will be allowed to attend games, and local governments could have the final say. It’s unclear if the NFL will allow certain teams to host more fans if their local regulations permit it. Either way, the NFL is expecting to lose a massive amount of money if games are played in empty stadiums. There will surely be other ideas to offset that beyond just the sponsorship logos.

NFL tells Chiefs that training camp will begin on schedule

Since the Kansas City Chiefs are presently scheduled to open the season against the Houston Texans on Thursday, September 10, that means they will officially open camp at their practice facility on July 25.

Per Rapoport, Goodell said that the league’s goal is to “get ready for games at our stadiums and to engage our fans both in stadiums and through our media partners,” which would suggest that the league is still hoping that games could be played in front of at least some fans. If you’re looking forward to a return to some kind of NFL normalcy, that’s good news.

But other reports emerging on Thursday sent less-positive messages about the coming season. The Pro Football Hall of Fame announced that it is cancelling the traditional opening game of the preseason — the Hall of Fame Game in Canton, Ohio — and postponing the enshrinement of the Hall of Fame’s 2020 class until 2021. This suggests that it is more likely the league will indeed reduce the number of preseason games for each team from four to two — a course of action that has reportedly been under discussion for the last couple of weeks.

From little known recruit to Super Bowl champion, it’s been quite the journey for Khalen Saunders.@sleepnumber | #ChiefsKingdom pic.twitter.com/rnPIZZ3HGF