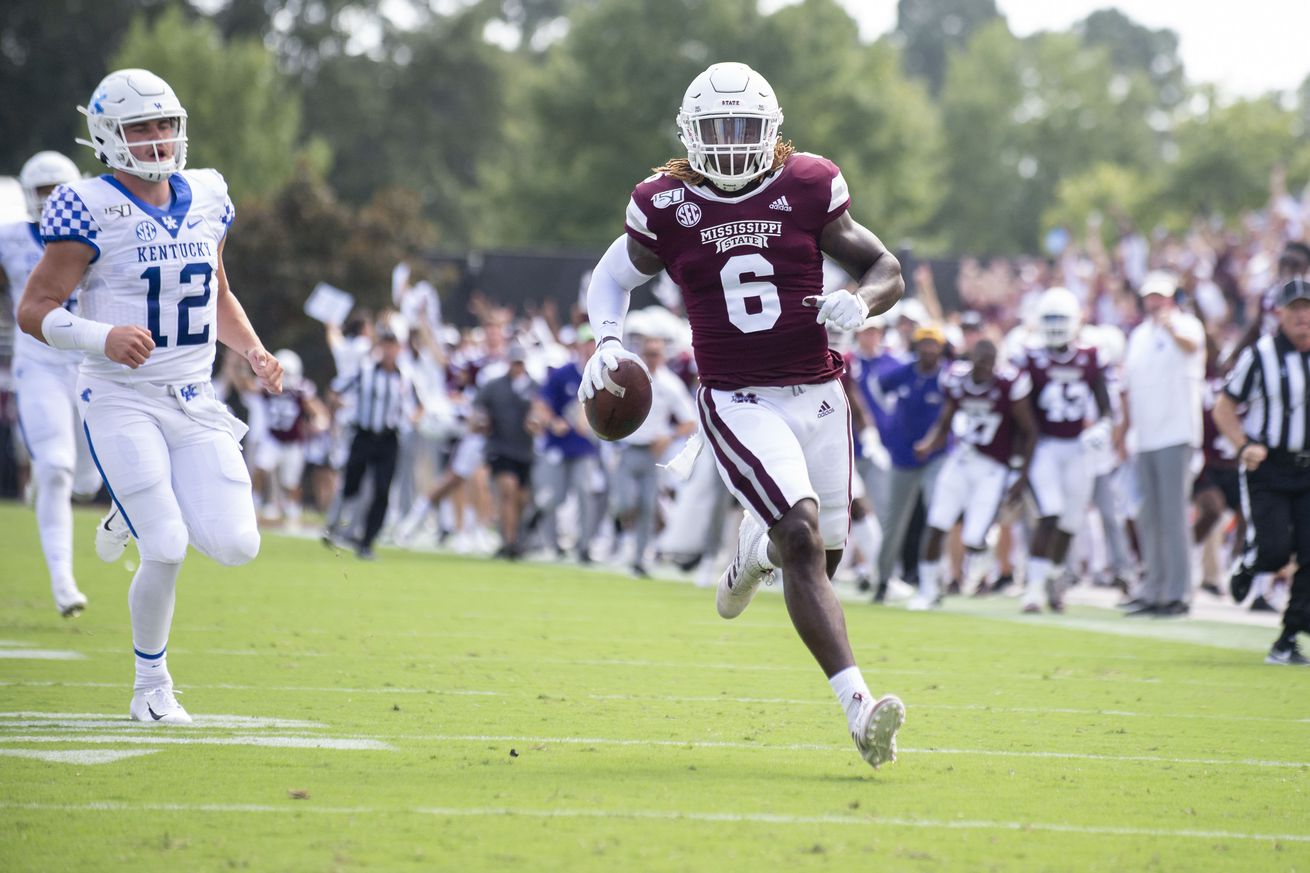 “I was always the fastest guy on the field,” he said.

Gay remained one of the fastest linebackers on the college level while playing at Mississippi State.

“He ran faster than most of these secondary guys out there,” Chiefs general manager Brett Veach said.

The Chiefs’ drafting of Clyde Edwards-Helaire was, in fact, a convergence of a few different puzzle pieces coming together. First, there was the team’s quiet internal concession that it’s needed a bellcow back since losing Kareem Hunt 17 months ago. Second, the draft fell in a way where some other need spots were picked clean by the time the Chiefs got on the clock at 32 (linebacker would be one, with Kenneth Murray, Patrick Queen and Justyn Brooks gone). And third, and this was the most important part, Kansas City fell in love with Edwards-Helaire’s game. Before every draft, GM Brett Veach and his staff give coach Andy Reid and his staff pockets of players to assess at every position, in an effort to marry up scouting reports from both sides of the operation. What the scouts got back from the coaches, from Reid to offensive coordinator Eric Bieniemy to RBs coach Deland McCullough, was unanimous, and lined right up with what the scouts were saying (Veach told Reid he believed Brian Westbrook was a fair comp just before Reid did the work on Edwards-Helaire). And that made it fairly simple picking Edwards-Helaire in front of about a half-dozen other guys the Chiefs would’ve been OK with at the position.

When Colquitt re-signed with the team in 2018, he said he wanted to finish his career with the Chiefs while “finishing the task” of winning a championship.

“That’s what we talked about in 2005, when me and Derrick (Johnson) came in here we all got cards which I still have,” Colquitt said, “has a picture of the Lombardi trophy saying ‘the main thing is the main thing’ and I’ve kept that card and I have all intentions when they drafted me in the third-round, staying here till that happens. If it happens too early in my career, like next year, I’m still going to say, just because that happened I kept the card and I still want to play here for six or seven more seasons.”

The Chiefs used their first-round pick — No. 32 overall — on LSU running back Clyde Edwards-Helaire, whose pass-catching ability and elusiveness make Kansas City’s offense almost unfair. Edwards-Helaire is arguably the best receiving back in this draft class, prompting many to connect the dots and imagine a 2020 Chiefs attack using Edwards the way Reid used Brian Westbrook to befuddle opposing defenses in Philadelphia. Big Red said that Edwards-Helaire is better than Westbrook. It begs the question: Are we about to see the full potential of this Chiefs offense? It’s a terrifying thought for the rest of the NFL.

Will defensive tackle Chris Jones play for the Chiefs this year?

The Chiefs didn’t trade him before the draft and haven’t signed him to a long-term contract. Jones has given no indication he plans to sign the one-year, $16 million tender he received as their franchise player. For now, it’s no sure thing the team’s leader in sacks in each of the past two seasons will be a part of things in 2020. — Adam Teicher

That’s the least of my accomplishments, I take care my family, my children. Gave $1M to The same program that dismissed me, started a foundation that is fairly active & GENUINE. Voted team captain for 3 Different franchises, not teams. I wish my granny was standing on side me. https://t.co/pnicsAhfYg

Back in the 2013 NFL Draft, the current Chiefs safety was selected with the No. 69 pick by the Arizona Cardinals. Coming out of LSU, Mathieu put together one of the most impressive tapes for a prospect. However, the only reason he wasn’t selected earlier in the draft was due to his character concerns off of the field.

While the Cardinals felt comfortable taking him in the third round, Polian wasn’t a fan of the decision. It’s safe to say that Polian was extremely wrong about his opinion on the LSU safety.

The Chiefs didn’t land a center in the 2020 draft, and Austin Reiter is in the final year of his deal. Humphrey was Jalen Hurts’ center in 2019, and Kyler Murray’s the season before that.

3. The Broncos wanted to get fast—in a hurry.

A starting quartet of Sutton, Jeudy, Hamler, and Fant could be the speediest group of receivers in football. Last season, Sutton finished with 427 yards on passes of 20-plus air yards—the sixth-highest mark in the league. Fant struggled on throws down the field (catching just one of his eight deep targets on the season), but Denver clearly plans on using his seam-stretching ability in coordinator Pat Shurmur’s offense. Jeudy has been lauded for his route-running ability, but he’s still good for plenty of big plays. And outside of former Jeudy teammate Henry Ruggs III, Hamler might have the best top-end speed of any receiver in the draft. It’s fair to question whether second-year QB Drew Lock is the right guy to take advantage of all this offensive artillery, but he’ll have no shortage of vertical options.

The Jets continued to give Darnold more protection and weapons in the draft. With their first-round pick, they took massive left tackle Mekhi Becton. In the second round, they lucked into wide receiver Denzel Mims, who some projected to be a first-round pick. La’Mical Perine is a bruiser who can complement Le’Veon Bell in the ground game.

They waited a little later to get help at edge rusher (Jabari Zuniga, third round) and cornerback (Bryce Hall, fifth round). Both come with risks, though they also have potential to be impact players.

It’s hard to find a cornerback with the athleticism, instincts and toughness to play nickel corner in the NFL. That’s why Raider Nation should quickly embrace Robertson as one of their future stars on the defensive side of the ball. The 5-8, 187-pounder is an aggressive tackler on the perimeter with a fearless approach to contact that will raise the level of physicality throughout the defense. In addition, Robertson’s superb ball skills, anticipation and awareness should enable him to make a number of plays in the passing game as a “see ball, get ball” defender. If the Louisiana Tech star can quickly master the nuances of the playbook, he should be in prime position to make an immediate impact as a sub-package player in Paul Guenther’s defense.

Lot of chatter in the scouting community about the Cowboys’ draft as well, for good reason. They may have landed the best receiver in the draft all the way down at 17, and while everyone has been going crazy about Amari Cooper’s deal, the dirty little secret is that he could be tossed aside in 2021 pretty easily. The guarantees are far from iron clad, and the fact is his replacement was already picked less than two months after he re-signed in Dallas. The Cowboys have botched this thing with Dak Prescott, but their draft haul had to impress the QB, and it seems like Jerry Jones is listening to his strong analytics team, which the great Cynthia Frelund of NFL Network tells me is second only the Baltimore’s in its resources and prowess (of which I had no idea). Love where Dallas was able to get Neville Gallimore as well.

Monday at 4 p.m. ET was the deadline for unrestricted free-agent signings to count in the compensatory pick formula for the following draft. Players officially signed after that deadline will not contribute to their former teams’ chances of receiving a compensatory pick for their departure.

A few names come to mind in relation to this deadline: Jameis Winston (set to sign with New Orleans), Logan Ryan (still available) and Jadeveon Clowney (in a holding pattern with at least the Titans and Seahawks). These deals would factor into the compensatory formula because they are unrestricted free agents who would rank within the top 35 percent of the NFL.

The Chiefs had flirted with the idea of releasing Dustin for a season or two, often welcoming punter competition during training camp. Thankfully, he held onto his job long enough to be a part of a Super Bowl winning team — something his tenure in Kansas City certainly deserved.

The ever reliable punter holds the franchise record for punting yards (50,393), and more importantly appearances (250). His departure means that no one from the team that Andy Reid inherited in 2013 remains on the roster.

We don’t know if Dustin’s retired or been released yet. Not sure it matters. Whatever happens next won’t diminish his contribution to the team & his place among Chiefs legends. pic.twitter.com/cxqVWrl1e8