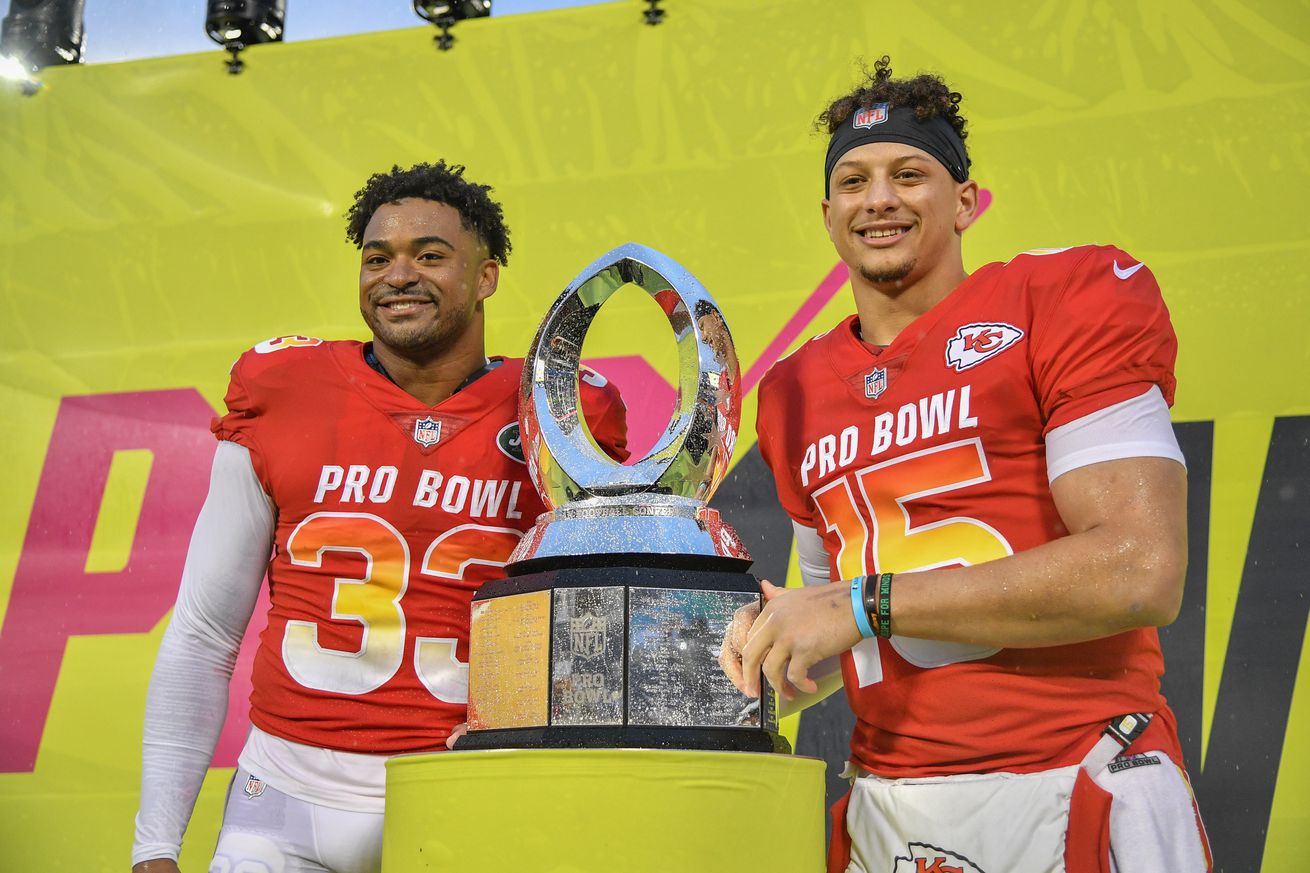 Adams has two years left on his rookie deal after the Jets picked up his fifth-year option in April. Rapoport reported late last month that it was unlikely the organization would comply with Adams’ demands for an extension or look to trade him in the near future. This latest development might force the team to heavily consider the latter.

Kansas City Chiefs: Adding Adams would be a dream come true for the Chiefs, but Kansas City also has to pay Patrick Mahomes his record-setting contract at some point while also having more cap space available than the $6.2 million they have now.

Where would Adams play in Kansas City’s secondary? The Chiefs already have Juan Thornhill and Tyrann Mathieu at safety, even though Adams has lined up in the box and at cornerback on certain plays for the Jets. Kansas City would likely have to part ways with one of them if the Chiefs want to bring Adams in Steve Spagnuolo’s defense.

The five-time Pro Bowler “only” scored six TDs during the Chiefs’ Super Bowl run, but let’s not over-complicate this: He’s the best. At 30, he may not be as spry as Kittle, who’s also got three fewer seasons of wear and tear. But the resume speaks for itself. On a Chiefs offense loaded with star power, Kelce still stands out as Patrick Mahomes’ most reliable target. We’re talking four straight years with at least 80 catches and 1,000 yards, not to mention only one missed game over the last six years. You could argue that Kittle, Ertz and maybe even Andrews have a higher ceiling, but no one’s got such a steady floor, and considering his supporting cast, there’s no reason to expect any drop-off from Kelce’s run of gaudy numbers.

How pro football has changed in the past 10 years: 12 ways the NFL evolved this decade | ESPN

4. A late-decade changing of the guard at QB

In 2010, the NFL’s top 15 quarterbacks, as ranked by Total Quarterback Rating (QBR), included Tom Brady, Peyton Manning, Matt Ryan, Drew Brees, Aaron Rodgers, Ben Roethlisberger, Philip Rivers and Eli Manning. Peyton Manning retired in 2015. The rest remain active but have mostly been eclipsed by a new wave. Brees and Ryan are the only members of that 2010 group to rank among the top 15 in QBR this season.

In their place is the 2019 MVP Lamar Jackson, along with Super Bowl LIV MVP/2018 MVP Patrick Mahomes and a host of other dynamic players. And it should be lost on no one that five of the top seven in QBR this season — Jackson, Mahomes, Dak Prescott, Deshaun Watson and Russell Wilson — are black. That’s more than twice the number in 2010 (Michael Vick and Josh Freeman) and a strong sign that the NFL has overcome one of most shameful stains in its history.

There was ex-Colts and Lions coach Jim Caldwell explaining the first 30 days for a head coach, then going step-by-step through a year-long process of teaching and developing a young quarterback, from general philosophy down to specifics of mechanics. There was Chiefs offensive coordinator Eric Bieniemy lecturing on leadership, managing a staff and building player/coach relationships.

And then, there was Maryland coach Mike Locksley, who spoke just months into his new job, after spending two years as offensive coordinator for Nick Saban at Alabama.

Twelve players whose teams should never let them leave | NFL.com

How confident were the Chiefs that Mahomes would develop into a superstar? General manager Brett Veach recently told me on SiriusXM NFL Radio that he started thinking about the impact Mahomes’ second contract would have on the team’s salary cap on the day the quarterback’s rookie deal was signed. In just two seasons as a starter, Mahomes has won an MVP award and ended Kansas City’s 50-year Super Bowl drought. He’s expected to soon receive the richest contract in NFL history — and it will be money well-spent by Kansas City. His ability to make every type of throw in big-play action makes him a true game-changer.

Killer turnovers kept employers looking elsewhere, but Steve DeBerg morphed into a watchable play-action tactician whose finest hour came with the Chiefs in 1990. Lighting up the enemy for 23 scores to just four picks, DeBerg tugged Kansas City into January while showing old-school grit along the way. He finished the year wearing a massive cast over his left hand to protect a fractured pinkie, with Rick Reilly of Sports Illustrated noting “the DeBerg Digit had been smashed so nicely in a game against the Houston Oilers that the bone poked through the skin.” Armed with his polypropylene mitt, DeBerg could barely take snaps. Still, he carved out a 13-3 lead against Miami in the Wild Card Round before tumbling to Dan Marino and friends. Retiring after the ‘93 campaign, DeBerg took a coaching role with the Giants under Dan Reeves before authoring one last dance of his own in ‘98: Returning from the wilderness to play a backup role for Reeves in Atlanta, the 44-year-old DeBerg took the field in Week 8 against the Jets to become the oldest starting quarterback in league history.

Nine Questions About the Rams and Chargers ‘Hard Knocks’ | The Ringer

Could Colin Kaepernick make an appearance?

Kaepernick’s return to the NFL has been widely speculated since Roger Goodell addressed the topic on Sportscenter earlier this week (after prodding from a number of the league’s most famous players) in which Goodell encouraged teams to sign the former 49ers quarterback. On Wednesday, Chargers head coach Anthony Lynn said the team might give Kaepernick a workout.

“It would be crazy to not have him on your workout list.” Lynn told ESPN. “I haven’t spoken with Colin, not sure where he’s at as far in his career, what he wants to do, but Colin definitely fits the style of quarterback for the system that we’re going to be running. I’m very confident and happy with the three quarterbacks that I have but you can never have too many people waiting on the runway.”

Based on that answer, it sounds like Kaepernick would get a workout if one of the Chargers’ three quarterbacks (Tyrod Taylor, rookie Justin Herbert, and second-year passer Easton Stick) got injured.

Sam Darnold 2020 outlook: Evaluating the Jets’ young passer and how he can take next step | CBS Sports

Adam Gase is still the head coach and play caller for the Jets, and frankly, that’s not good. Outside of two seasons in Denver with Peyton Manning, Gase’s track record isn’t too shiny.

Even in 2015, when Jay Cutler had one of the better seasons in the NFL career in Gase’s offense, the Bears’ passing offensive finished 16th in Football Outsiders’ DVOA, which happens to be his best pass-offense finish during his time as the head coach in Miami. In 2017 and 2018, the Dolphins’ aerial attacks finished 23rd and 27th, respectively, in DVOA.

Watching every Darnold play from last season was like hearing nails on a chalkboard, and not just because of Darnold’s struggles. Gase’s offense was routinely hyper-conservative and overly reliant on Bell behind a blah offensive line. In the season-opening loss to the Bills, Crowder had the first game from a receiver with 14 or more catches but fewer than 100 yards since at least 1950 in the NFL, which was sign of things to come for the Jets offense.

One of Tampa Bay’s assistant coaches has tested positive for coronavirus, and two other Buccaneers assistants have been quarantined, sources told ESPN’s Adam Schefter.

The one unidentified Buccaneers assistant who tested positive is asymptomatic, sources said.

The news comes just days after Tampa Bay coach Bruce Arians and his staff returned to the team’s training center in Tampa for the first time since the onset of the coronavirus pandemic.

Now we’ll show you a technique that could become more prevalent with the athleticism the Chiefs added with new linebacker Willie Gay Jr. Spagnuolo loves to blitz. Defensive line coach Brendan Daly loves to play games on the line. So why not marry the two into a pressure technique?

The coffeehouse blitz is named for its start-stop nature, which requires the player executing the blitz to fake a technique before rushing the passer. This can mean that the player simulates dropping into coverage, stops rushing as if to spy the quarterback or even attempts to execute a stunt. Brandon Thorn wrote an excellent article about coffeehouse stunts, and I highly recommend reading it.

The coffeehouse blitz takes a similar approach — but it is used with a non-traditional rusher, and doesn’t always involve another rusher.

Hypothetically (since nothing else to talk about)

Chiefs save nearly 13M this year, on hook for 9M in 2020 (likely less than anything Jones would make) THEN