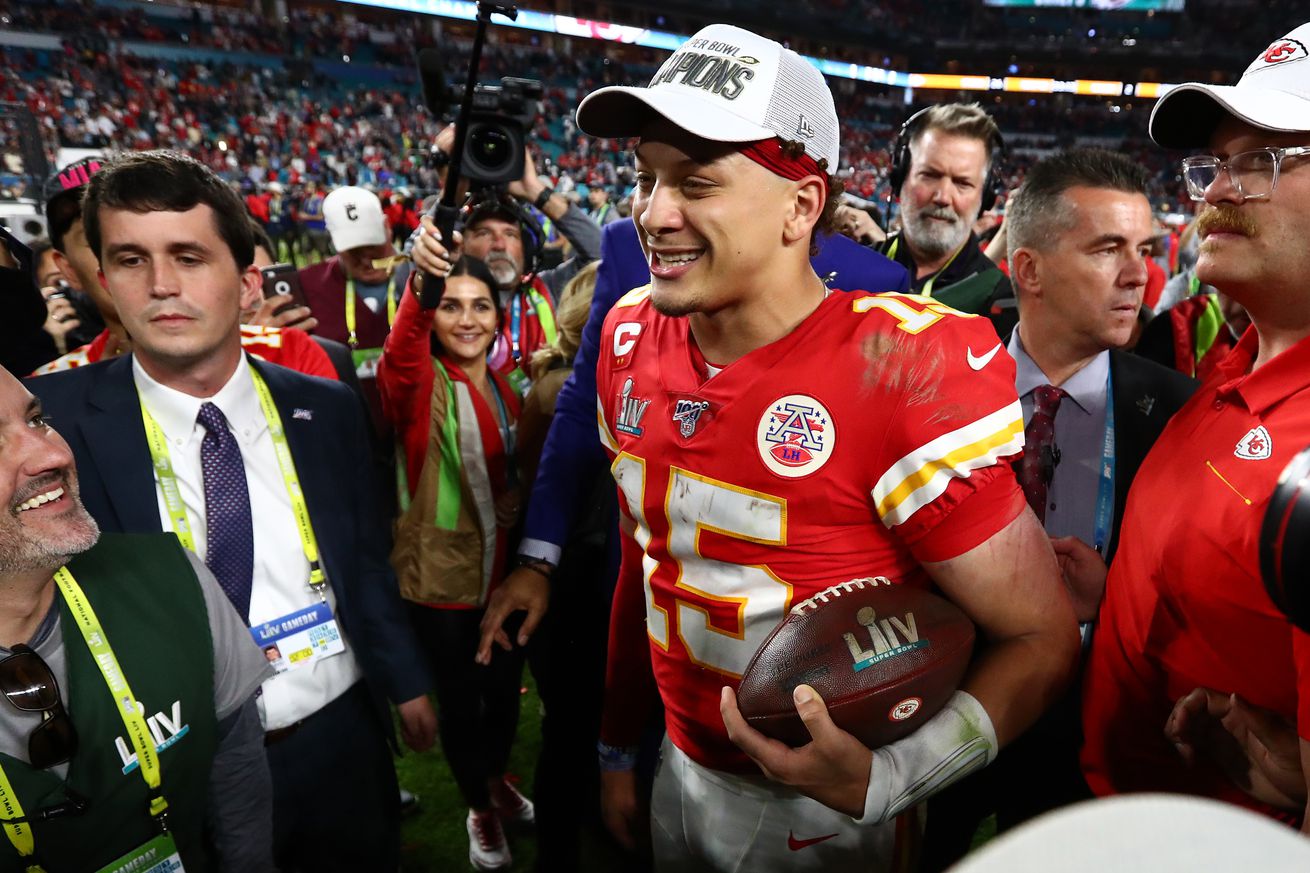 From @NFLTotalAccess: The #Texans picked up Deshaun Watson’s option as they work on a long-term deal. The #Chiefs are expected to do the same with Patrick Mahomes. No word yet from the #Bears to Mitch Trubisky, who has shown up for virtual work with a good attitude. @nflnetwork pic.twitter.com/7lVACua8yj

However Sportrac are reporting it has already happened | Sportrac

The #Chiefs (unsurprisingly) exercising Patrick Mahomes’ 2021 option means his rookie contract expands to $41M over 5 years. His eventual extension will push up near $41M per year.

The Chiefs ranked 23rd in rushing last year and had not fully replaced Kareem Hunt. First-round pick Clyde Edwards-Helaire may not have represented great value for a team needier on defense, but the LSU RB broke 70 tackles last season and caught 55 passes. With Andy Reid labeling him as an evolved version of ex-Eagle Brian Westbrook, that is a stop-in-your-tracks moment considering Patrick Mahomes already has All-Pro tight end Travis Kelce and a receiver troika that includes all-time speed merchant Tyreek Hill, a younger Hill version (Mecole Hardman) and Sammy Watkins.

Seven NFL Rookies Who Can Break Out Right Away | SI

You’re not going to get drafted by Andy Reid if you’re not versatile, and the Brian Westbrook comparisons aren’t made lightly. Edwards-Helaire can find himself on the field for three downs right away. His blown block percentage at LSU was exceptionally low (1.6%) and his ability as a receiver out of the backfield ballooned in 2019, as he was split out wide on more than 20% of his snaps with the Tigers. As Patrick Mahomes grows into a more autonomous role as the conductor of this offense, he’ll appreciate a running back he can grow with.

If any team had the luxury of drafting a running back in the first round, it’s the Chiefs — and they did just that with LSU’s Clyde Edwards-Helaire. Though on the smaller side, Edwards-Helaire is a threat as a runner and pass catcher. He’s also a great fit for the Kansas City offense and should make it even more dangerous.

The Chiefs focused on linebacker in the second round, taking the athletic Willie Gay Jr. from Mississippi State. They didn’t do much to boost the secondary, though, adding Louisiana Tech safety L’Jarius Sneed in the fourth round and waiting until the seventh for cornerback help (Thakarius “BoPete” Keyes of Tulane).

Niang was once regarded as a potential first-round pick before his injury. He did not sacrifice many pressures in the Big XII. Kansas City needed to upgrade their offensive line more than many realized. They are setting themselves up for a sustainable championship run over the next five years.

There might not have been a better fit in the draft than Edwards-Helaire and the Chiefs. Quibble with taking a running back in the first round if you’d like, but Andy Reid has his new Brian Westbrook (or, gulp, perhaps an even better version of the former All-Pro). CEH is the dynamo K.C. didn’t technically need (yes, the offense was already great) but will certainly get the most out of. I didn’t love anything else about what the Chiefs did, but that’s not really surprising considering their flexibility was pretty limited, as they entered the draft tied for the fewest selections in the league (five). There’s a case to be made that they should have added a true corner earlier than Round 7, but that might be where Sneed, a safety last season at Louisiana Tech, ends up playing. Gay was one of the stars of the NFL Scouting Combine, but will he be able to put it all together and challenge for a spot atop the depth chart next season? Niang is coming off November hip surgery, but he has the tools to become a starter. On the other hand, seeing Danna, who wasn’t considered a lock to be drafted, go in Round 5 was a surprise. This isn’t a bad haul, but the excitement about it wore off for me after Day 1, which probably means this will be a great group.

2020 NFL Draft: Most questionable pick made by all 32 teams, including two in Round 1 but not the Packers | CBS Sports

The Central Michigan edge rusher landing in the fifth round was a bit of a surprise. He flashed some pass rush potential with the Chippewas but had just three for the Wolverines last season. The Chiefs could be banking on Michigan holding him back a bit as well.

Which NFL Rookies Have the Most Fantasy Football Upside in 2020? | The Ringer

Any running back who gets significant playing time for the Chiefs is valuable from a fantasy perspective. In 2017, Kareem Hunt led the NFL in rushing as a rookie and finished as a top-three fantasy player. Edwards-Helaire should be especially valuable in PPR leagues. The question with him, as with many fantasy running backs, is how much he’ll play. “You can’t do it with just one guy in today’s football, so we’ve got a whole lot of these guys now,” Reid said.

Stories inside the virtual 2020 NFL draft: 10 GMs on what they learned | ESPN

“Nothing against Jordan Love. I mean no disrespect,” Favre said. “But you trade up to get a guy who might turn out to be great, and I hope he does, but you trade up to get more of a project. He’s a little bit unproven. A lot of upside, no doubt about it. But he can’t help you get to the Super Bowl immediately.

“And I just think that if you’re playing for now as all the teams in the league will tell you they are — or most will tell you that, some certainly are not — but Green Bay’s one of them that should be playing for now. They don’t draft any weapons, not just in the first round, but any weapons that can help immediately, to my knowledge. And that just sends a disrespect message, I would think, to Aaron Rodgers. He has every right to be disappointed if he is.”

Trudeau’s comments came a day after CFL commissioner Randy Ambrosie told the Canadian Press that the league is seeking $150 million in federal assistance — $30 million immediately and potentially up to $120 million more if it has to cancel its season.

Can the Chiefs continue to invest little draft captial in cornerback?

One reason Veach has succeeded with small investment in cornerback is the scheme they play in. Defensive coordinator Steve Spagnuolo has a clear style of player he wants to be on the boundary of his defense. The player ideally has a bigger frame, good length and uses his natural physicality to disrupt the receiver off the snap with press, close on passes to the flat and tackle well on outside runs. The utilization of safeties in Spagnuolo’s defense makes the ability to carry deep routes and keep up with speedy receivers less significant.

Meanwhile only 2 of 5 draft picks from AFCW rival Raiders hit & neither one is currently a Raider: