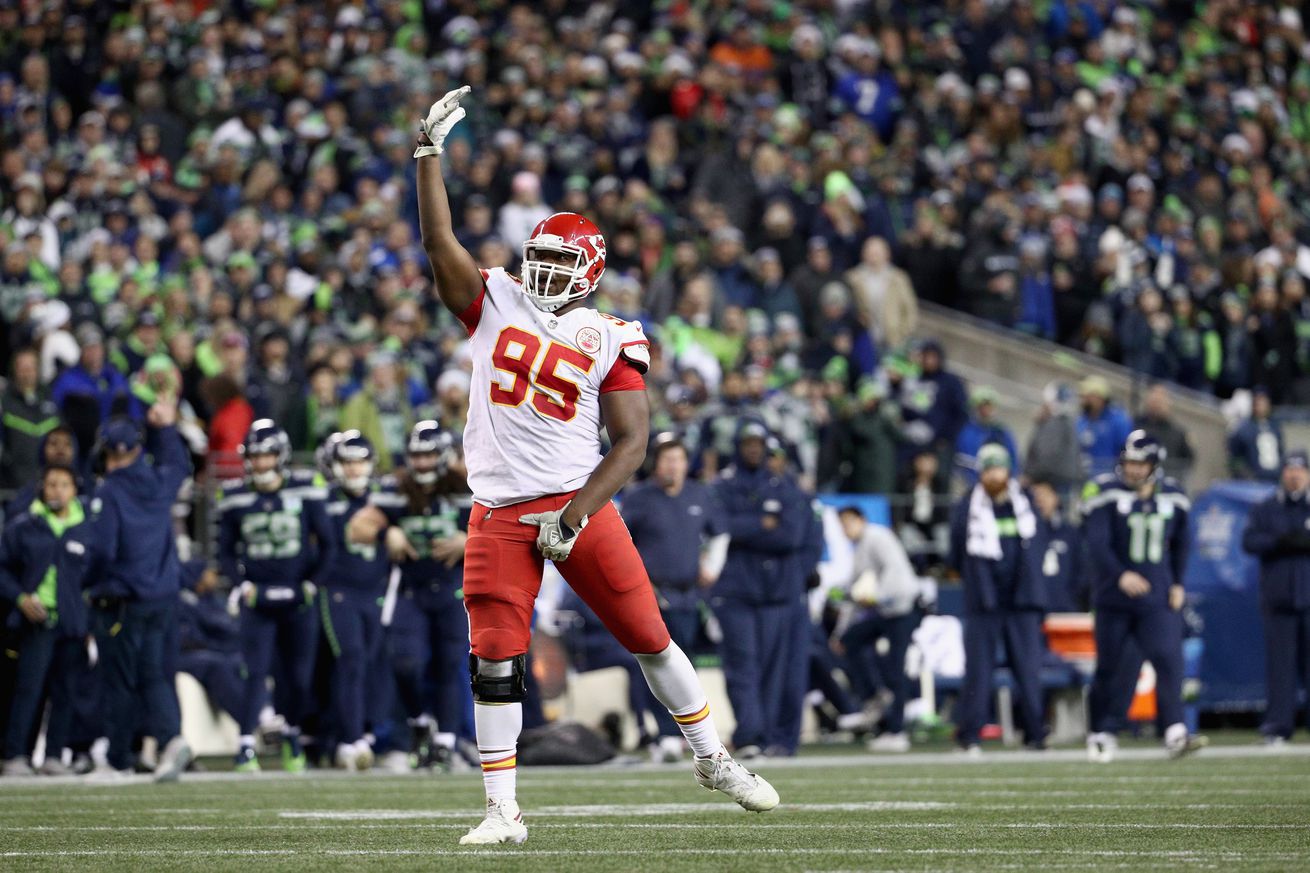 This contract would give Chris Jones a small leg up on Deforest Buckner’s recent extension. He would surpass Buckner’s contract in terms of both average salary and total guarantees, just slightly. Seattle would bank on the salary cap re-establishing over the next couple of seasons, and it should.

This is basically a “will Tyreek Hill have a relatively healthy season?” prop. Since Patrick Mahomes became the starting quarterback (2018), Hill has eclipsed 1,150 yards in both seasons (played 15-or-more in both).

Hill only had 860 yards last season but there were a few important injuries to note. In Week 1 he suffered a shoulder injury in the first quarter and didn’t return until Week 6.

After returning, he balled out for five games, averaging 105 yards per game. Then in Week 11, he suffered a hamstring injury in the first quarter against the Chargers which sidelined him for the rest of the game. In the games following, he never looked fully healthy. He was periodically seen limping and was often used as a decoy.

Even if we include the half-injured games in our sample, Hill only played in 10 complete games. In those games, he racked up 844 receiving yards (84.4 yards per game). That’s a pace of 1,350 yards on the year with a full 16 games played.

Hill has played in 15-or-more games in 3-of-4 career seasons and should be fully healthy entering 2020. With similar target competition and Mahomes still at the helm, I’m willing to bet that Hill will eclipse 1,150 yards fairly easily and approach 4for4’s projection of 1,319. I would bet Hill up to 1,200 yards.

Denver Broncos: 3 things team must do to end slump vs. Chiefs in 2020 | Predominantly Orange

Travis Kelce needs to be contained

Just in the time that the Chiefs have gone on this huge winning streak over Denver, Kelce has caught 65 passes for 673 yards and four touchdowns in the games played between the teams. He’s done that in just eight games. That is ridiculous.

“It’s an opportunity for us to set a standard for who we’re going to be the entire season. The first three games right off the gate, especially the first two games (with) Kansas City and Baltimore right out of the gate, I think that is going to set a precedent. We take home those two Ws, then other teams are going to be like: ‘The Houston Texans are the team to look out for.’”

Demarcus Robinson ($4,800) — D-Rob has been a pleasant surprise in Madden simulations and is among one of the top value plays in this contest. He’s effectively been the Chiefs WR3 and has been right up there with Travis Kelce and Sammy Watkins in terms of production. The thing is, Robinson is cheaper and that’s what we need to craft a winning lineup.

Cole Beasley ($7,000) — Beasley may be a little bit pricier than most value plays but he’s got good upside and we need some leverage. I could see a lot of lineups overlooking Beasley and the Bills offense overall. We know slot receivers have good floors, making Beasley a pretty safe play.

After being selected in the sixth round of the 2019 NFL draft by the Kansas City Chiefs, Darwin Thompson blew up in fantasy social media circles. He got the “Andy Reid RB” treatment, which skyrocketed his ADP up to the 7th-8th round before the fantasy football season. Thompson “rewarded” the fantasy community by producing 37 carries for 128 yards (3.4 yards per carry) and a touchdown while adding nine receptions and 43 yards in 12 games. The 23 year-old-rookie finished fifth on his own team in carries, behind Damien Williams, LeSean McCoy, Patrick Mahomes, and Darrel Williams. His 32.1 points were good enough for an RB88 finish.

During his most productive stretch of the season (weeks 13-17), the Utah State product averaged 25.6 percent of the team’s offensive snaps but was only able to produce 32 carries, 120 yards, six receptions, 33 receiving yards, and one touchdown. Ultimately, the hype was unwarranted as the team opted to lean on LeSean McCoy early and Damien Williams down the stretch of the season and playoffs.

By signing his franchise tender, Prescott will be contractually obligated to report to training camp on time, whether or not he and the Cowboys can figure out a long-term deal.

Prescott’s decision to sign the franchise tender is not an indication that a long-term agreement is close, league sources told ESPN’s Ed Werder.

The fact that Prescott will be one of the highest-paid players in the NFL — and the potential his franchise tag increases by a mandatory 20% next season to $37.7 million with a flat or lower cap in 2021 — is incentive for Dallas to secure a long-term deal before the July 15 deadline.

Over 13 games last year, Jacobs amassed 1,150 yards, seven touchdowns, eight runs of 20-plus and just one fumble. Next Gen Stats shows one of the league’s most efficient runners (roughly as north-south as Nick Chubb, who may be the best pure ballcarrier in the NFL) and a rushing success rate (via Football Outsiders) that was better than Saquon Barkley or Christian McCaffrey in 2019. Vegas’s offensive line is solid—so much so that the Raiders actually had two of the best rushing “sweet spots” in the NFL, outside the tight end on the right side and between the left guard and tackle. That combination of efficiency and offensive line diversity, plus the fact that Jon Gruden will almost certainly feed Jacobs the ball at a steady rate, puts him in a solid position to either lead the league in rushing or come close enough to earn a Pro Bowl nod in 2020.

Disgruntled New York Jets safety Jamal Adams, who formally requested a trade on Thursday, apparently has a preferred destination — and it’s no surprise.

In a cellphone video posted to social media and presumably shot Sunday in the Dallas area, a fan spotted Adams in his Mercedes SUV and asked, “You coming to Dallas?”

According to ESPN, the NFLPA and and league are maintaining a database of players who have tested positive for the virus — and at least 10 teams have reported at least one positive case.

In the last week, we have seen reports that players for the Houston Texans, Dallas Cowboys, Denver Broncos, San Francisco 49ers and Tampa Bay Buccaneers have tested positive. Citing Federal medical privacy laws, teams have largely been unwilling to disclose the names of infected players, but we have learned that Dallas running back Ezekiel Elliott and Denver safety Kareem Jackson are among those who have tested positive for the disease.

We know of at least one team — the 49ers — where at least one player who tested positive was participating in private workouts with a group of teammates. That group is reported to include all 49ers quarterbacks — including starter Jimmy Garoppolo.