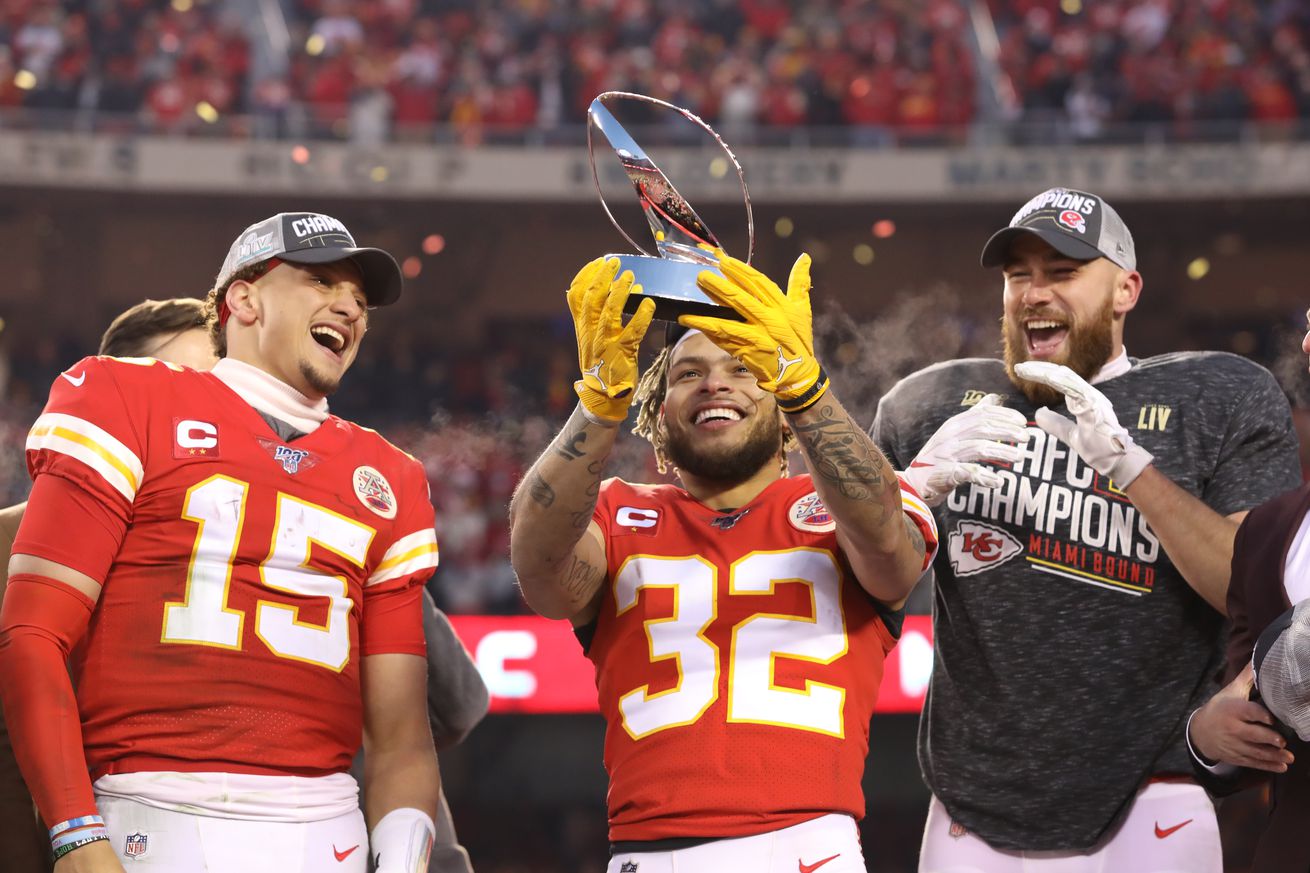 The COVID interruption forced Frith to dial back the ambitiousness of the coaches’ show. In past episodes, NFL Films has interviewed the entire staff — head coach, coordinators, position coaches — over the course of two or three days. This time, they spoke to only three — Reid, Eric Bieniemy and Steve Spagnuolo — for about 90 minutes apiece.

“There’s enough with their story together, individually, that it drives an hour easily,” said Frith, who hinted that the coaches’ show skews more toward the defensive side than he thought it would, given the Chiefs’ powerful offense.

“As we played out the season with the coaching staff, in a lot of ways it was a defensive story. Andy’s teams were always good, they just couldn’t get over the hump … it was looking like the same old Chiefs at one point this season, [with] a great offense and the defense [letting] them down eventually. But then the defense turned it around, and Spags is great at explaining it.”

Each “America’s Game” episode features interviews with three players, and Weber got his first three choices of Mahomes, Mathieu and Kelce. The hourlong conversations took place early in training camp.

In their defense | NFL.com

“It’s rare that you see a team come out and say they’re going to repeat after winning a championship,” said NFL Network analyst Terrell Davis, the Hall of Fame running back with the Denver Broncos when they won Super Bowls during the 1997 and 1998 seasons. “This isn’t basketball. It takes a lot of different pieces to win a title. And once you get in that position to repeat, it’s not like it’s best-out-of-five out there in the playoffs. You have one off day — hell, one off quarter — and it’s over. I know the Chiefs had a lot of comeback wins (in the postseason), but you can’t count on that every year.”

If you know any Cowboys fans, then you’re probably well aware that at the start of every NFL season, there’s nothing they like to talk about more than why this will finally be the year the Cowboys win the Super Bowl. It’s pretty much happened every year for the past 25 seasons. Although I usually laugh in their face after they make the prediction, this year I won’t be doing that, and that’s because I ACTUALLY AGREE WITH THEM. I think Jerry Jones might have brainwashed me because I think THE DALLAS COWBOYS ARE GOING TO WIN THE SUPER BOWL, and they’re going to do it by knocking off the defending champion Kansas City Chiefs.

Worst outcome: The concept of a playoff bubble gains steam, taking away one of the NFL’s premier home-field advantages as the Chiefs secure the No. 2 seed. Issues on defense resurface, thanks to an undermanned cornerback corps, and Andy Reid’s pre-2020 playoff luck leads to a Round 2 upset.

Fifty-five NFL things to watch on the road to Super Bowl LV | NFL.com

12) Houston Texans at Kansas City Chiefs | Week 1, Sept. 10 (Kickoff Game): OK, we’ll start with the Chiefs. What this game really means, though, is that the NFL passed its first test and made it to the season opener.

13) Miami Dolphins at New England Patriots | Week 1, Sept. 13: We’re probably not going to see Tua Tagovailoa for the Dolphins, as Brian Flores announced on Monday that Ryan Fitzpatrick will be Miami’s Week 1 starter, but we are going to see Cam Newton playing quarterback for the Patriots. And this will not even be the strangest sight of the weekend.

14) Tampa Bay Buccaneers at New Orleans Saints | Week 1, Sept. 13: This will be the strangest sight of the weekend: Tom Brady in another uniform. You still have to rub your eyes to believe it’s true, but don’t take too long to focus, or you’ll miss Brady’s debut in Bruce Arians’ offense against Drew Brees.

In July, the reigning Super Bowl MVP signed a contract extension worth a maximum of $503 million over 10 years. Except it’s not really worth a half-billion dollars. In truth, the deal is closer to a six-year extension paying Patrick Mahomes $225 million, after which they will rip up the back half of the contract and renegotiate. But now is not the time for nitty-gritty contractual details. The point is that Mahomes is under contract at an average of roughly $45 million annually until 2032.

Believe it or not, signing Mahomes to this contract raised Kansas City’s available cap space in 2020 by $30,000. That’s because Mahomes agreed to backload the money to help Kansas City pay other players. The Chiefs subsequently re-signed defensive tackle Chris Jones and tight end Travis Kelce, each of whom were important contributors. Don’t worry, Mahomes still had enough money to propose to his girlfriend with an eight-carat diamond. But the next question he faces is whether he can bring another ring home to Kansas City.

“I was in Carolina, and had given everything to that organization that I possibly can, and I will always have a place in my heart for Carolina. But as a professional, you go where you’re summoned to go, and what’s best for your career. Just as it will be what’s best for the organization. I’ve just been loving myself and loving this opportunity I’ve had, coming into this position.”

The third thing is the big play. Baltimore hit a lot of shots early in the year in 2019, but that fell off later in the season. So Jackson’s made it a point to work on that with his receivers—a challenge considering they lost a whole spring of work and a slate of preseason games—and his receivers, in turn, have invested too. Hollywood Brown and Mark Andrews are playing faster now, as a result of their work. Miles Boykin is a year older, and rookies Devin Duvernay and James Proche bring game-breaking ability too.

“Down-the-field passes, we hit a lot of those early on in the season, but not really as the season went on,” Jackson said. “So we just keep working at that, keep getting better at that, and the sky’s the limit for us.”

Ever since the news of this development broke late Friday, Dolphin fans everywhere have come out with pitchforks and heated rhetoric, claiming that Rosen was never given a real chance to succeed, that Miami made a bad move trading for the QB and a worse one letting him go so soon and on at least one site, that general manager Chris Grier and head coach Brian Flores played politics with the Dolphins’ quarterback unit.

The one sign that fans should have recognized, but for the most part, didn’t, is that this move sends a clear and unmistakable message that the team believes Dolphins quarterback of the future, Tua Tagovailoa, is much closer to taking over the reins of this football team and franchise than many of us, myself included, had previously thought. Like his predecessor, Ryan Tannehill, Tagovailoa is a natural leader that his teammates tend to gravitate to, and has top intangibles. Unlike Tannehill, he’s both an NFL ready product and oozes sky high potential.

Trapasso: Browns +8. The Browns beat the Ravens by 15 points in Baltimore early last season, and I just don’t see a gap in roster talent between these two clubs worthy of a spread of eight points. Myles Garrett is back, and Cleveland made a concerted effort to fortify in the offensive line and returns key offensive skill-position players for Baker Mayfield.

White: Bears +3. We can’t take much from the two matchups between these teams last year since Matthew Stafford was injured for both, but we do know that the futures market has considered the Bears the better team of the two all offseason. Yet the line for this game has increased to Lions -3, despite the real possibility that home-field advantage won’t be worth much in the unique environment teams are forced to play in. I think the Bears have just as good a chance at winning this game outright as the Lions, and we’re getting the benefit of a push if the Lions win by a field goal.

Who will start opposite Charvarius Ward at cornerback on Thursday?

Sneed played primarily as a safety his final year at Louisiana Tech — but in 2018, he showed promise at corner. The Chiefs moved him to what might his more natural position — and reports have been promising. Sneed had a lot of reps with the first team in the only broadcast practice the Chiefs showed during training camp.

As of this AM, the Rams were actually over the cap. Per the NFL report, the teams closest to the cap …