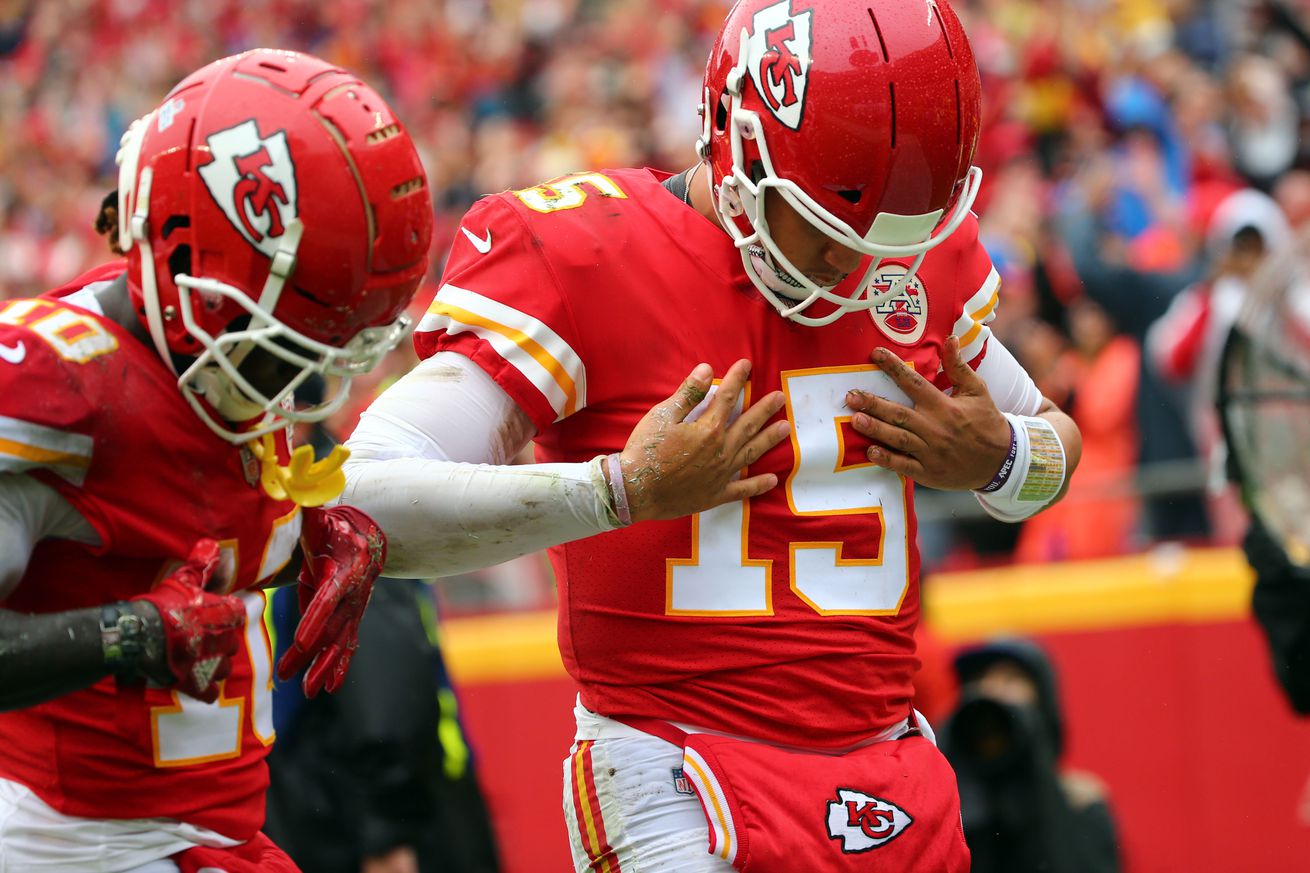 Chiefs headlines for Friday, May 1.

5) Patrick Mahomes and Tyreek Hill, Kansas City Chiefs: Every notable skill-position player returns to the offense of the defending champions. A wealth of weapons — including first-round pick Clyde Edwards-Helaire and receiver Mecole Hardman, who could see an expanded role in Year 2 — will create plenty of opportunities for Hill to burn through opposing defenses.

Ask a former NFL player: Which team has the best roster in the league now? | SB Nation

Now that the draft is over, which teams are the most talented in the NFL? — @cater123

It’s hard to determine whose roster is the most talented, but I can give you the best guesses. The first is clearly the Chiefs. They return 20 of 22 starters from their Super Bowl team. They’re elite at QB, RT, TE, WR, DE, DT, and safety. They have an above-average LT, multiple other dynamic WRs, and now you can add running back Clyde Edwards-Helaire, who was just drafted in the first round.

Staying in the AFC, the Ravens are close to the Chiefs. They boast 2019 NFL MVP Lamar Jackson at QB, excellent offensive tackles, some speed at wide receiver and tight end, and now they have Ohio State running back J.K. Dobbins. On defense, they added Calais Campbell and Patrick Queen to pair with an outstanding secondary. But, they aren’t the Chiefs.

Colquitt’s “Punting for Smiles” campaign delivered thousands in funds to the organization, providing nearly $450 in dental care for every $50 raised, while Colquitt himself makes significant donations out of his own pocket every year. He even took an active role in recruiting other players from around the league to host TeamSmile events in their own markets, spreading the initiative to more than a dozen other cities.

The 10 Greatest Upsets In Super Bowl History | The Sportster

The New York Jets lit a fire into the AFL. However, no one believed it, and the Minnesota Vikings entered into Super Bowl IV as 12.5 to 13.5 point favorites. They had the Purple People Eaters defense and were dominating. The Kansas City Chiefs came in and dismantled the Vikings, 23-7. Chiefs quarterback Len Dawson was the MVP, and the Vikings went on to lose four Super Bowls in the ‘70s.

The Clyde Edwards-Helaire selection is reason enough to give this class an A-; he takes an offense that was good for 30 points a game and now makes them good for 35. Willie Gay Jr. is a freak athlete, Lucas Niang is a bargain at the end of Round 3, and L’Jarius Sneed is a safety who may be more comfortable moving back to safety. Grade: A-

“When you look at Kansas City, and you look at what they have on offense, we needed to get faster,” Mayock said.

Lynn Bowden Jr. isn’t scared. Soon after being selected by the Raiders in the third round of the 2020 NFL Draft, the do-it-all offensive weapon called out First-Team All-Pro Tyrann Mathieu.

“Tyrann Mathieu because he’s already got the name Honey Badger,” Bowden said in a Bleacher Report AMA when asked whose ankles he wants to break. “Got to prove myself.”

“I don’t think there’s much you can do unless we let the receivers line up 5 yards offsides and go,” Packers defensive coordinator Mike Pettine said of preparing for Hill. “It’s one of the reasons why he has the production that he does because I think you practice all week against it, and all of a sudden you get out there and it’s significantly faster than what you prepared for. I’ve never seen anybody on an NFL football field that fast before. I got a chance to visit the Chiefs when I was out of coaching, went down for OTAs, and it was Tyreek’s rookie year. I was watching the practice, I’m like, ‘Is this a full-speed drill?’ He looks like he was going full speed and everybody else didn’t.”

Patrick Mahomes will one day sign an NFL-record contract; All-Pro Chris Jones may join Frank Clark as Chiefs $20M-per-year defensive linemen. The defending Super Bowl champions entered the draft with few needs, but they are light at cornerback. Although the Chiefs drafted corners in Rounds 4 and 7, going with Clyde Edwards-Helaire in Round 1 may be pushing it. The Chiefs will not be able to spend in free agency like they have during Mahomes’ rookie deal and probably needed to use its first-rounder on its defense. That said, it will be fun to watch the tackle-shedding dynamo in Andy Reid’s offense.

Former Patriot Duke Dawson started three games for Denver last year, and third-year pro Isaac Yiadom will throw his hat into the ring after starting (and mostly struggling) in eight games in 2019. De’Vante Bausby, who suffered a scary neck injury that left him temporarily paralyzed last season, could be another option. Ultimately, the team may be forced to throw third-round rookie Michael Ojemudia into the fire from the get-go absent any other game-ready options. Ojemudia has the size (6-foot-1, 200 pounds) and athleticism to excel in the Broncos’ scheme, but it’s a big ask to put a third-rounder out on the field early on, especially in a division with Patrick Mahomes.

Seven NFL Rookies Who Are Under Pressure to Perform Quickly | SI

As we’ve detailed in the past, receiver development is difficult in the NFL as it is. This has changed a bit over the last two years as NFL and collegiate offenses have come to more of a middle ground, but Reagor comes into a situation where he’s going to be forced to be spectacular right away. The Eagles’ aging, injury-prone receiving corps dragged down the offense late in the season and was difficult to replenish in one offseason, despite a solid draft and trade for Marquise Goodwin.

Reagor was in the slot 14% of the time at TCU last year and ran 13 different route concepts. The diversification of his responsibilities will broaden in Philadelphia.

2) New England Patriots: Deep breaths, Patriots fans. The Red Rifle isn’t Tom Brady, but nobody is. Dalton is reliable, with considerable starting experience (he was 70-61-2 as a starter for the Bengals) and, on paper anyway, is better than the current top two quarterbacks on the roster. Jarrett Stidham has no experience as a starter (although the Patriots have seen him in practice for a year), and Brian Hoyer is 16-22 as a starter for his career. And Dalton could come cheap. Jameis Winston just signed in New Orleans for $1.1 million plus incentives. There is a big caveat here, though: Stidham and Hoyer already know the Patriots’ offense, and that could be a significant factor, considering nobody knows when teams will be able to get on the field again as the world continues to grapple with the COVID-19 pandemic.

Denver Broncos linebacker Von Miller tweeted Thursday that he is negative for the coronavirus, two weeks after announcing he had been diagnosed with it.

On April 16, Miller announced his diagnosis, saying he went public to emphasize that anyone can be afflicted with the virus.

Film review: OT Lucas Niang was a steal in the third round of the draft

Niang has a full list of the skills and traits that make up a good NFL offensive tackle; his length, athleticism and quick reaction time allow him to play as a finesse tackle — but he has the power and size of a mauler. While there are some aspects with his pad level and hand technique that need to be cleaned up, we must remember his injury robbed him of his full development.

4th and Goal from the 1 yard line

Chiefs are going for it. What’s your play call?@610SportsKC @ArrowheadPride