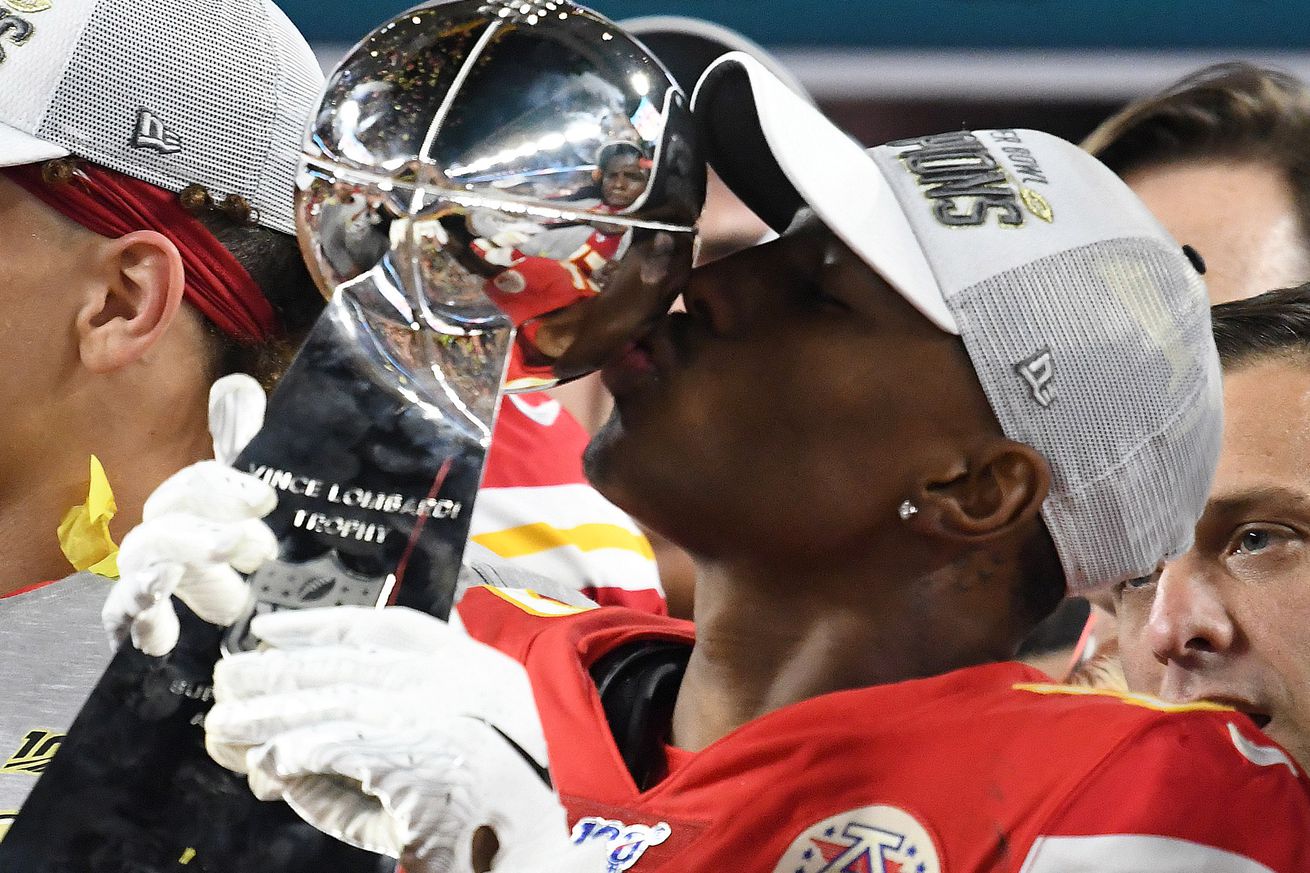 Mecole Hardman was a perfect fit on the Chiefs roster as a rookie in 2019. The second-round pick was both a receiver and a returner, who finished fourth on the team in receiving yards with 538 and added six touchdowns. He also averaged over 26 yards per kick return and even took one back for a touchdown, which is a rarity in today’s game. Hardman had a quiet Super Bowl, but still managed 286 kick return yards in the postseason. The threat of his speed was enough to keep opposing defenses wary, helping open up the offense.

That’s still a much bigger number than either the Kansas City Chiefs or the Baltimore Ravens to win it all out of the AFC.

The defending Super Bowl champion Chiefs are the favourites at +500

This past week, Hill declared that he is issuing an open challenge to anyone who wants to race him. “Anybody that want a real head up race I’m here,” Hill said.

Hill’s reputation as one of the NFL’s fastest players is well-earned. He ran a 4.29 40-yard dash and was a track star in high school and college. Hill even won two medals for the United States at the 2012 World Junior Championships.

2020 NFL roster rankings for all 32 teams: Ravens are first, and Jaguars are last | PFF

Biggest weakness: Kansas City did just win the Super Bowl with this cast of cornerbacks (plus Kendall Fuller, who left for Washington in free agency), but that doesn’t make it any more of a strength. Bashaud Breeland did a decent job of limiting production with just 29 receptions allowed on the season, but his coverage grade of 51.3 indicates that it came with a fair amount of luck. The reception total also doesn’t consider his 12 penalties on the season — tied for most at the cornerback position. A potential suspension following an offseason arrest for Breeland makes that starting spot even shakier.

Gary Spani played during one of the roughest stretches in Kansas City Chiefs history. From his rookie year to his final one, a total of nine seasons, the Chiefs won a mere 61 games out of 144. Even worse, the Chiefs only finished above .500 twice during that span, their best record of 10-6 coming in his final season of 1986.

Adding insult to injury, 1986 was the only year Spani’s Chiefs made the playoffs and they were absolutely eviscerated by the New York Jets in the Wild Card by a score of 35-15. Even so, Spani left an indelible mark on the sport of football.

How Could the Rest of the NFL Let Bill Belichick Get Cam Newton? | SI

But having the common sense to sign Cam Newton isn’t cheating. It’s not nefarious. It doesn’t require the shadowy existence of a humorously named football deflator or Bostonian-accented cameraman who sounds like an extra from The Departed. This was common sense. This was so insanely obvious.

The NFL fined the New England Patriots $1.1 million and took away a third-round pick in the 2021 draft among punishments for their television crew’s filming the field and sideline during a Dec. 8 game between the Cincinnati Bengals and Cleveland Browns.

In addition, the Patriots’ television production crews will not be allowed to shoot any games during the 2020 season, and senior club officials will undergo required training on league operation and game policies.

“I think the change is going to come,” he said. “Me and Frank Gore continue to show guys, ‘Hey, we are valuable. We can have 10, 14-year careers as well, so value us as well like you would value a quarterback, you know?’”

“This young core of backs are really changing the game for the better,” Peterson said. “I feel like you’re going to continue to get guys like that, that’s going to help raise the value of the running back position.”

During an interview with USA Today, Smith was specifically asked about social media posts from workouts by Tampa Bay Buccaneers quarterback Tom Brady and Seattle Seahawks quarterback Russell Wilson and said they aren’t acting “in the best interest of player safety.”

Reports: Cam Newton to the Patriots

Why are these two stories connected?

If Newton plays well enough in 2020 as a one-year starter for the Patriots and leaves in free agency for a lucrative deal, that means New England would receive a compensatory third-rounder in 2022 to help make up for the penalty.

Regardless of that note, Newton is a Patriot, and his competition in the quarterback room for the starting position is Jarrett Stidham and Brian Hoyer. The Chiefs play the Patriots Week 4 at Arrowhead Stadium at 3:25 p.m. Arrowhead Time.

Chiefs caught a tampering charge for Maclin that lost a 3rd and a 6th round pick.

This is a repeat offense for something the Pats have already been docked a first round pick. https://t.co/Y4Q0YkTtJT