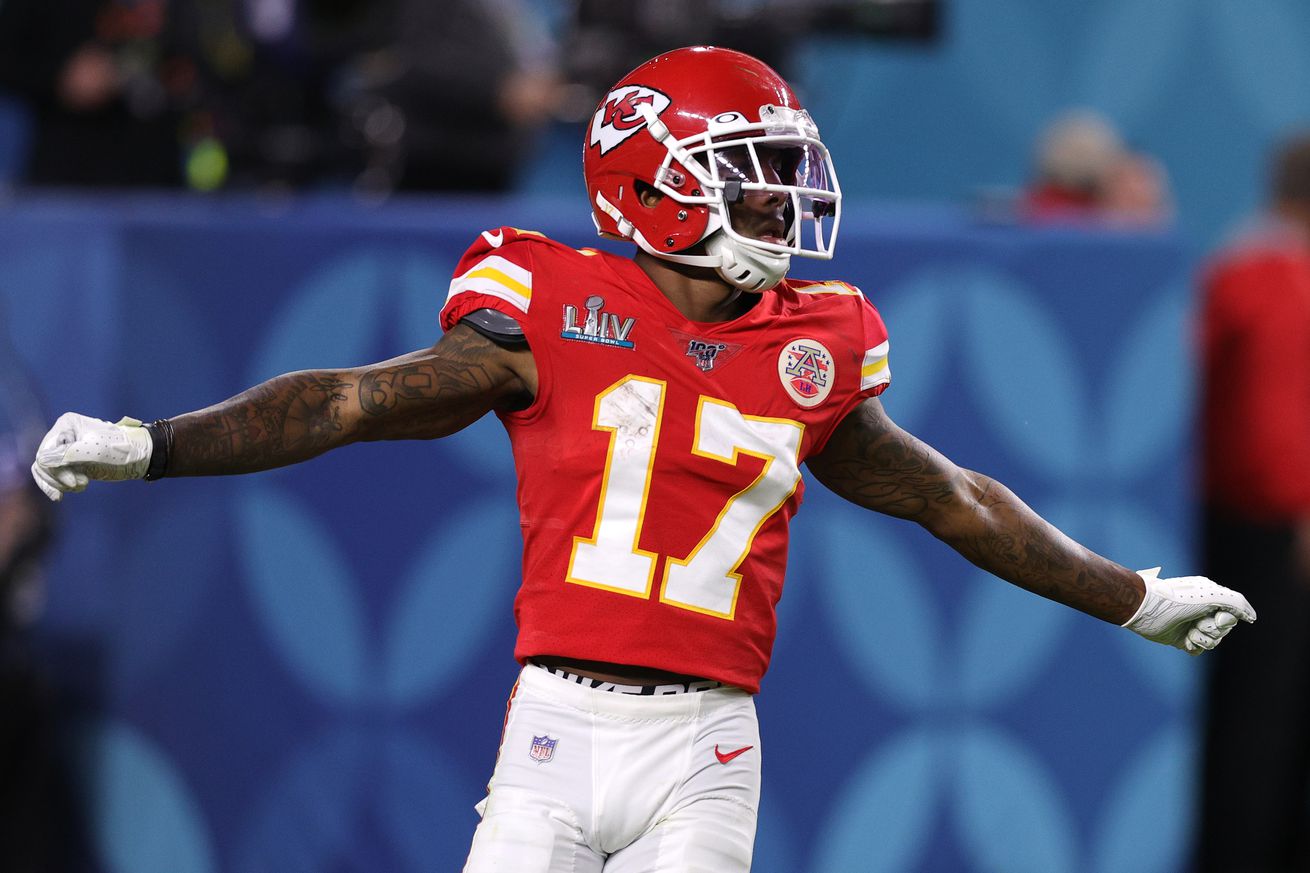 Mecole Hardman had the perfect rookie year, as he made the Pro Bowl and won Super Bowl LIV in his first NFL season. He made his name known as a returner last year, but it’s clear he is capable of much more. Hardman didn’t record a catch in the season opener against the Jacksonville Jaguars, but he took advantage of his opportunity when Tyreek Hill missed time due to injury. In Week 2, Hardman caught four passes for 61 yards and a touchdown and then caught two passes for 97 yards and a touchdown the following week. It became clear that the Chiefs had discovered another burner who was a threat to score whenever he touched the ball. Hardman finished the 2019 season having caught 26 passes for 538 yards and six touchdowns, and also averaged over 26 yards per kick return. In all, he averaged 18.5 yards per touch and 20.7 yards per reception.

Mahomes has already proven himself, Hill is a star wideout and the Chiefs also have a few capable running backs. If Hardman can maintain his status as a Pro Bowler when it comes to special teams play and eventually become one of the starting receivers, he could help the Chiefs reach dynasty status. Sammy Watkins’ future with the team is unknown, but it’s possible they have someone much better in waiting.

In an idea floated by Pro Football Talk, Charean Williams suggested all helmets could now include speakers, meaning coaches would be able to talk their players through certain protocol before the snap, rather than one captain spreading the directions. Tyrann Mathieu, who remains one of the top safeties in the AFC, believes he would greatly benefit from this.

If they let my coach talk to me seconds in between plays and pre snap. , I’ll make every play. https://t.co/jBxOjFjwHE

This is what Rank wrote: “At what point do we turn on the Chiefs? You might not believe this right now, but people celebrated the Patriots when they won their first Super Bowl. Honestly, everyone was all about it. I was living in Los Angeles at the time and all of the former Rams fans thought it was great. Everyone loved Tom Brady. Bill Belichick was deemed charming for his demeanor. OK, the last part is taking it too far. But everyone eventually turns on the champions. Brady. Steph Curry. John Cena. You love them at first and can’t wait to see them win. But at some point you’re like enough already, to the point that once their music hits, you roll your eyes and start booing, even though they are really, really good.”

Which Team Is the Best Fit for Jamal Adams? | The Ringer

Remember, this is a wish list. Who wouldn’t love to go play for the defending Super Bowl champions, especially when the Chiefs average almost two touchdowns more per game than the Jets do over the last two seasons combined? Adams would certainly make the Chiefs defense more formidable alongside fellow LSU safety Tyrann Mathieu. But this is unrealistic. Kansas City is stretched in cap space and needs to preserve the little it has to figure out the situation with franchise-tagged defensive tackle Chris Jones, who is Kansas City’s best defender and one of the most dominant interior pass rushers in football. After Jones, the Chiefs are possibly going to give Patrick Mahomes an unprecedented NFL contract extension. Trading for Adams is a luxury this team literally cannot afford.

A Kansas City Chiefs Jamal Adams Trade: How Likely Is It? | Last Word on Pro Football

Given Adams’ status as one of the top players in the NFL, the trade compensation to acquire him will be substantial. It is unlikely that Kansas City includes a player in a trade with the Jets as they likely will be looking for draft picks in any trade. For a Chiefs franchise that projects to have late draft picks in every round, more picks will have to be included to compete with other franchises in the trade market. Such a trade is not a smart move for Kansas City who will need as many draft picks as possible in the next few years to offset the large contracts their players are in line for. The Kansas City Chiefs should not give up cost-controlled assets at this time.

I know what you’re thinking … uh, Mahomes?? But I’ll refer you all the way back to the top, where I mentioned that the method we chose here only partially accounts for opportunity. So while Mahomes has exceeded expectations in his short career, that wasn’t quite enough to vault him into the top spot in Chiefs history (since 1967), though he’ll surely be there soon (Mahomes also barely played his rookie season). Livingston frankly didn’t have a particularly impressive career, anyway.

“But overall, the Chiefs’ QB draft history is bleak. The two signal-callers mentioned above are the only quarterbacks drafted by the franchise to exceed their expectation based on pick. That’s bad!“

The team at the top of the ranks is clear. The reigning Super Bowl champs sport arguably the top quarterback (Patrick Mahomes), top wide receiver ( Tyreek Hill), and top tight end (Travis Kelce) in the game. They were also able to bring back the rest of their receiving corps, including playoff hero Sammy Watkins and budding sophomore speedster Mecole Hardman, and added receiving-inclined rookie running back Clyde Edwards-Helaire. This is the passing offense opposing defenses least want to face.

In March the entire sports world shut down based on one positive test (Utah Jazz All-Star Rudy Gobert). Now, with hundreds of positive tests among athletes in college and professional sports—and no vaccine on the horizon—all sports are starting up again. Let that sink in.

And, it seems, NO league—the NFL included—is planning to suspend operations upon positive player tests. They will “play through,” mitigating, as best they can, with detailed protocols about quarantining and testing. Can this realistically work?

NFL players will not live in a “bubble.” There will be daily interactions with family, friends and others beyond the team facility. And no matter the detail of protocols for social distancing in weight rooms, locker rooms, meeting rooms, etc., NFL (and college) football players have to, well, practice and play football, a sport that requires the opposite of social distancing. Virtually every football play ends with one player applying extreme face-to-face, body-to-body pressure to bring another to the ground. The acts of blocking and tackling would seem to involve a lot of “droplet exchange.” As to masks within the helmets? Please.

Lions owner Martha Ford stepping down, will be succeeded by daughter | NFL.com

“It has been a great honor for our family to be associated with the Lions and with the National Football League,” Firestone Ford wrote in a statement. “I am gratified that this family tradition, which my husband and I began almost six decades ago, will continue under Sheila’s guiding hand. It is clear to me that Sheila will provide superb leadership and is fully committed to competitive excellence and community involvement.”

The Tampa Bay Times reported that quarterback Tom Brady and several teammates were working out at Berkeley Prep on Tuesday morning, despite the NFL Players Association advising against such workouts.

The NFLPA’s medical director, Dr. Thom Mayer, said Saturday that players should not “be engaged in practicing together in private workouts.”

Romo hit the broadcasting world with the subtlety of an asteroid smacking Manhattan. Lauded almost immediately as the greatest color commentator of our time, the bigger question is how Romo will manage to top himself as the career unfolds. He appears up to the task, seeing plays before the snap and dropping macro/micro observations that leave lesser player-turned-analyst types wholly exposed. His enthusiasm for the game is genuine, immense and magnetic. DO I LIKE FOOTBALL ENOUGH? is a question I ask myself with an ounce of guilt while watching Romo melt into a puddle over a draw play in the second quarter of a Week 3 game between the Titans and Colts.

His rapid rise begs another question: Why can’t others equally shine? Romo’s 10,000 hours spent playing football allow him to teach CBS viewers what they’ll never see on their own. The next guy goes from field to booth and offers little more than cliché bombs, unable to communicate what he’s learned as a player. It helps to have the consistently smooth Nantz by his side as an expert-level table-setter, but who knows? Romo might thrive in the play-by-play seat, too.

John: Todd Blackledge gets a bad rap. He’s all wrapped up in that 1983 draft where the Chiefs could have taken Dan Marino, so I think people tend to think he was worse than he really was. And he had the misfortune to have been platooned with Bill Kenney during his career; I really don’t know what the Chiefs were thinking during that time. I think you have to consider Mark Vlasic as one of the worst Chiefs quarterbacks. Brodie Croyle should be on the short list, too.

From @NFLTotalAccess: As @MikeSilver mentions Antonio Brown has interest from the #Ravens and #Seahawks, there are others. And he’s in a good place. But the NFL still hasn’t weighed in. pic.twitter.com/rBESSDx701