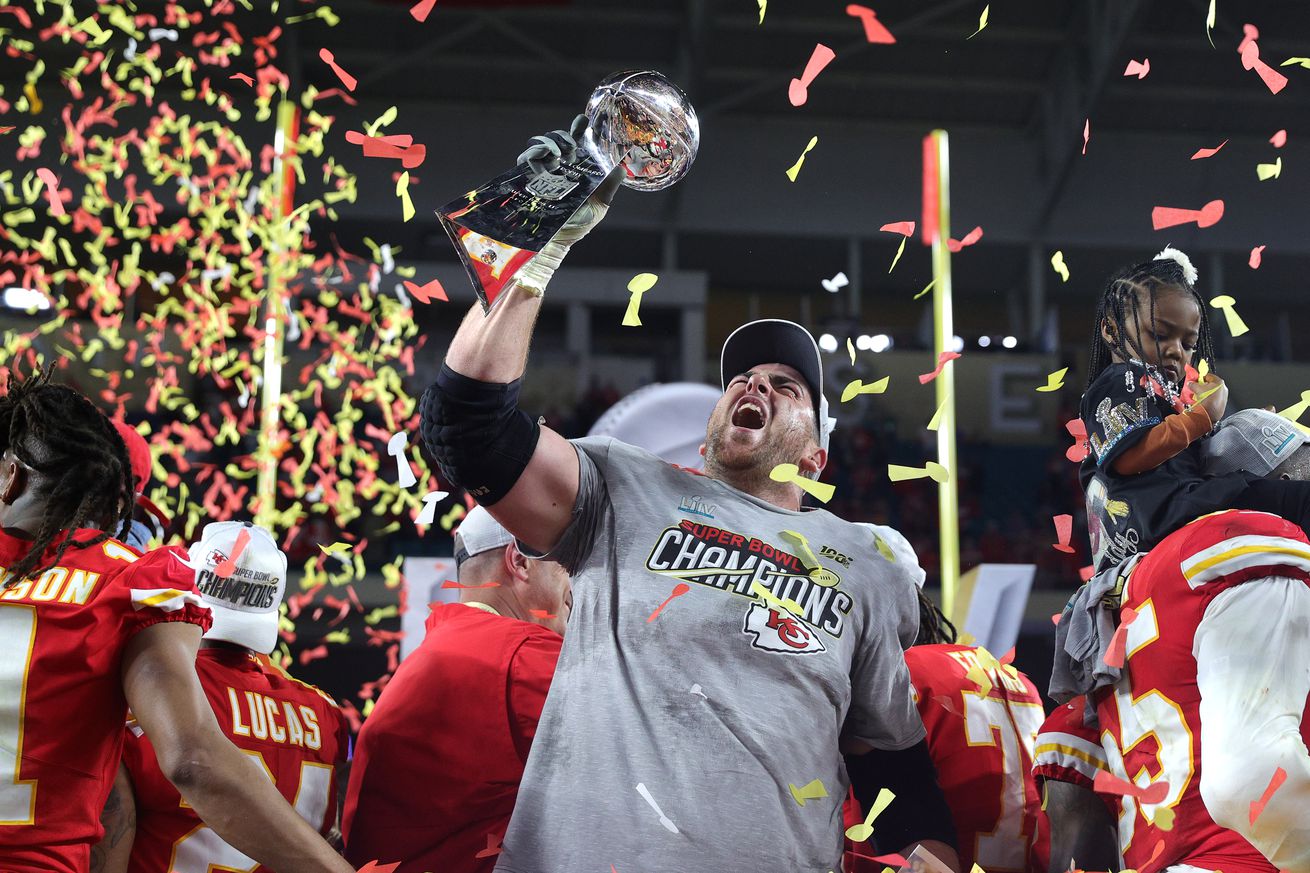 A Lineman’s Choice: To Defend a Super Bowl, or to Fight a Pandemic | SI

Look, I understand the role that sports play in society. I get the need for games to serve as bonding exercises that rally people together in the worst times. But I had to wonder, in this particular year, did playing follow my larger convictions? Football is, of course, a physical sport that is not without personal risk. But in 2020, just by playing football I could potentially expose cities to COVID-19 and spread the virus. I believe I have a responsibility toward my community from a public-health perspective, and by playing, the risks would become more than just personal, more than simply about me. For my whole career, my two passions had complemented each other and aligned with my convictions. In this particular season, though, they did not align.

The Chiefs return with most of the key pieces for their high-octane offense this year―and add a dynamic pass-catching back in first-rounder Clyde Edwards-Helaire―and the now-fully-healthy Patrick Mahomes should be ready to resume carving up opposing defenses. Pairing Mahomes with Andy Reid’s pass-first, super-aggressive philosophy creates the foundation for a Super Bowl repeat, and the team’s top-tier special teams unit doesn’t hurt matters either. If the Chiefs can field even a league-average defense again this season (that group finished 14th last year in DVOA), Kansas City has a good shot at defending its title.

I know what some readers must be thinking: How can you rank a player who hasn’t played an NFL snap? Well, let me tell you. CEH was an absolute force for the national champion LSU Tigers to establish himself as the best running back in his draft class. He was the only RB selected in the first round — by the Super Bowl-winning Kansas City Chiefs no less — AND the team’s leading rusher from last season (Damien Williams) opted out of the season. This guy is about to feast and quickly climb the charts.

This is a rematch of the AFC Divisional Round game that was won by the Chiefs in a blowout after rallying from 24 down. This will be a lot easier. The Texans have defensive issues that will show up here. Patrick Mahomes and the Chiefs roll.

In a season with so many unknowns, I’m making my pick based on a known: Patrick Mahomes. And Andy Reid. And the roster that GM Brett Veach somehow managed to keep together, despite a brief window in time when the team had $177 in salary cap space. With the virtual offseason, and no preseason games, it’s a fair bet that teams that were already cohesive—with a clear identity and a strong coach-QB relationship—will have something of an upper hand. And one of the Chiefs’ new additions, first-round pick Clyde Edwards-Helaire, is well-positioned to fold in and make a big impact right away. After a long wait for both the Chiefs and Reid, it wouldn’t surprise anyone if the next championship is quick to come by.

Do you need an explanation? Any team, save for maybe the Ravens , would happily swap their QB for No. 15 here. It feels like we’re already taking for granted just how athletic, poised and polished this guy is at 24. With a championship-level supporting cast, all signs point to Mahomes storming back into the MVP conversation.

Deshaun Watson is ready to be heard | ESPN

“Honestly, I’m going to take that back,” he says. “To keep it real with you, I feel like whenever a Black quarterback speaks up, the outside world sometimes doesn’t think they’re educated enough to know what’s going on. So in reality, they’re like, ‘Hey, y’all Black quarterbacks — shut up. Y’all don’t know what y’all talking about.’”

While we knew it wasn’t an Achilles tear, there was uncertainty on exactly what the injury was when the news broke. Now that we know the details, it seems that the best-case scenario for Miller’s recovery is around 3 months.

Thus, it is remotely possible that Miller could return by the tail-end of the season.

A former NFL doctor was more optimistic in his analysis. David Chao, who was the head team doctor for the San Diego Chargers from 1997 – 2013 recounted a story of Luis Castillo being able to return after a similar injury to Miller’s:

I have direct experience with several early returns for NFL players in the same season. One case involved Chargers defensive end Luis Castillo (permission granted by player to publicly discuss his injury). In 2007, he dislocated his peroneal tendons in Week 9 vs the Vikings. I performed the surgery to relocate the tendons and repair the torn sheath to hold it behind the fibula where it belongs. Castillo was not placed on IR missing seven games before returning prior to the end of the regular season. He played in all three playoff games including the AFC Championship game and performed well enough to earn a 5-year $43.1 million extension that next offseason. I have been involved with other same-season returns at about 3 months (but as of this writing, had not been able to contact the players for permission to use their names).

Ramsey becomes the first defensive back in NFL history to sign a deal worth over $100 million, and his $71.2 million at signing is the largest guarantee to a defensive back.

The Rams announced the five-year agreement Wednesday without providing the value.

The previous largest contract for a cornerback in terms of average annual value was Darrelle Revis’ $18.2 million per year, when he signed a six-year contract in 2013 after being traded from the New York Jets to the Tampa Bay Buccaneers. Revis was released the following offseason.

“When you play the game of football the way I did, you convince yourself you’re Superman, that nothing can stop you,” Shazier said. “But then the moment I got hurt, I stopped being Superman, and that was difficult to make sense. But the way I look at it, God put us all here for a purpose. For 20 years, he let me play football. And now it’s time for me to do what he wants me to do.”

Aqib Talib announces his retirement from NFL, turns down offer to return to the Patriots in 2020 | CBS Sports

“I was halfway out the door. I got flights and started finding apartments. I could’ve gotten up to five or six million [dollars] — a nice contract. … But I started going through that schedule. I saw [George] Kittle, [Travis] Kelce, [Darren] Waller, and normally when I go to a new team, my thoughts are all positive. … This time, I looked at this f—–g schedule, and I thought, ‘Can I even strap these damn tight ends?’

“I said it’s over with. Once that thought crossed my mind, my heart and competitive edge just aren’t in it like that anymore. [Plus] you turn 34 and you lose a step. You don’t move the same way you used to move, so I just wasn’t feeling it anymore. You have to play this game with heart.”

Chiefs-Texans focus points: How will the Texans stop Travis Kelce?

How will the Texans handle Travis Kelce?

As I wrote on Tuesday, the 51-7 run against the Texans in last season’s AFC Divisional round game wouldn’t have happened without one of Travis Kelce’s career-best performances. The Texans tried to man up with safeties, big corners, slot corners and double teams — and none of it mattered. Kelce’s impact was crucial to the Chiefs’ run. If the Texans are set on trying to play man coverage again, expect a big game from Kelce. Otherwise, the Texans will have to use a significant portion of their of resources to stop him — which will open things up for the rest of the Chiefs’ wildly-talented offense.

Thursday will mark the team’s most-anticipated rookie debut since Patrick Mahomes in 2017, when general manager Brett Veach’s only true first-round pick takes the field. Edwards-Helaire is tailor-made to play in Andy Reid’s offense; that’s why I compared him to Brian Westbrook in this year’s edition of the KC Draft Guide. Reid can drop this young running back into the offense and immediately become less predictable; Edwards-Helaire can do more than any running back the Chiefs had last season. Expect a fast start — and plenty of opportunities — in Edwards-Helaire’s debut.