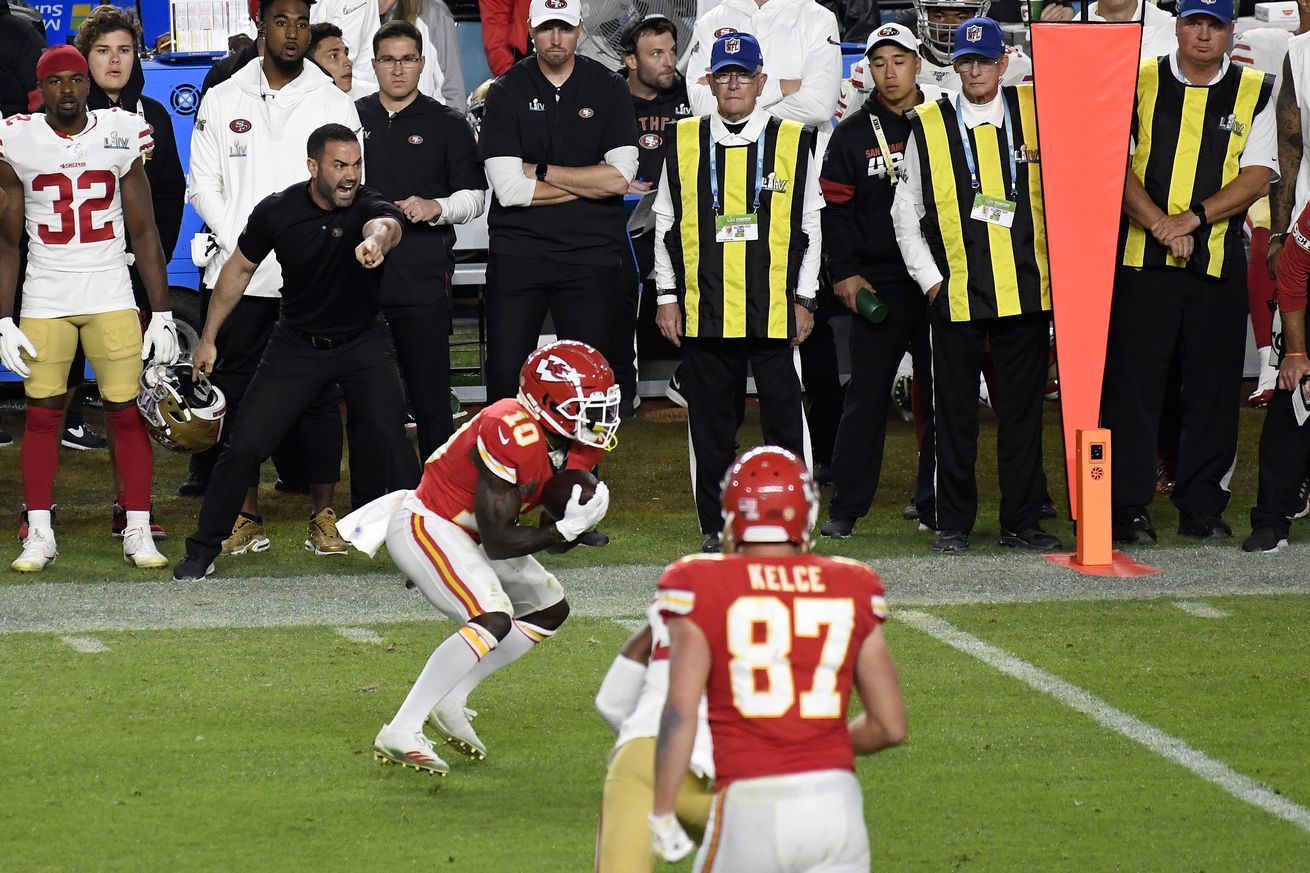 “When you can have two possessions with no worry about the time — like, the clock isn’t a deal to me — and it would have been three possessions if they didn’t get that first down. And that’s when the clock was a deal. But once they got that, I was like, ‘All right, this is a game now.’ “

“The NFL put out protocol and it’s an ever-changing document — it’s over 80 pages long,” Burkholder said Saturday during a Zoom call. “This thing is detailed, it’s very well-done. It was put together by the NFL and the NFLPA in a joint effort.”

Over the past nine weeks, the NFL and NFLPA put together work groups for testing, acclimation of players, how to deal with positive tests, contact tracing, travel and sanitation of equipment.

Burkholder was a member of the work group dealing with acclimation, while Chiefs equipment manager Allen Wright took part in discussions about sanitizing equipment. Reid, meanwhile, talked to all teams’ owners.

“The Chiefs had a big say in the protocol,” Burkholder said. “As the protocol came out, we were charged with doing this infectious disease emergency response document. That is what is our document and our motivating force is behind what we’re doing with the Chiefs.”

According to Terez A. Paylor of Yahoo Sports, Mahomes said Saturday that he is “100 percent” in “full support of everything that they are doing to help the efforts with Breonna Taylor and everything they’re doing with the Black Lives Matter movement.”

Mahomes added: “They’re doing a great job of being examples of going back and being with the sport they love, but also staying with the movement and not letting their love for the sport affect their mind and motivations of supporting the movement.”

“You talk about that number,” McCoy told Mike Garafolo of NFL Network. “That number’s 12,000. That’s something I’ve always wanted to achieve. That’s big to me. Right now, just talked to a couple of teams – some of my favorite teams – that I’d think would be a great fit for me. I won’t tell you exactly, but I think the biggest thing is to find the right fit.”

“I think at this point in my career, it’s not just playing football,” he added. “I want to play for the right team. I want to be able to contribute. I want to be able to win another championship. You can’t go from playing with the Chiefs with all that talent and winning a championship to now just trying to play. I’m the type of guy, I want to come in a room, challenge the running backs, get them better, be a veteran leader. … So just got to find the right fit for me.”

“You love that guys have the goals; they want to be in Kansas City for a long time and they want to win championships – they don’t want to be average,” said Mahomes. “They want to be great every single year. But I think other than that, you know these guys and how they’re talking, other than just the quotes, they’re talking about the day-to-day process, they’re talking about how hard it is to be on the top, to get to the Super Bowl. If you look at our season this last season, we had a lot of adversity, a lot of ups and downs in the regular season and in the playoffs. I think the guys have that mindset, they have those long-term goals, they know that they’re going to have to go out there every single day and prove that, they’re going to have to go out there with the mindset to be great every single day. If they go through that process every single day, they’ll never have any regrets at the end of your career.”

This match-up will no doubt be the hardest one for the Panthers in 2020. Kansas City is stacked from top-to-bottom with some of the league’s most talented players. 2019 MVP Patrick Mahomes leads KC’s star-studded offense, a unit that features names like Tyreek Hill and Sammy Watkins. As good as their offense is, the Chiefs defense is nothing to scoff at either. Led by star defensive back Tyrann Mathieu, the Chiefs’ stifling defense will likely give a young Panthers’ team some problems offensively. If the Panthers can score early and often, they give themselves a chance in this tough matchup. While this game isn’t totally out of reach, it will take a monumental effort and a bit of luck for the Panthers to pull off a win against a talented Chiefs team mid-season.

Players positive for COVID-19 can be put on temporary IR | NFL.com

During the 2020 NFL season, there will be a temporary injured reserve for players who test positive for COVID-19, NFL Network Insider Ian Rapoport reported on Sunday morning.

Though the NFL and NFL Players Association reached an agreement on COVID-19 adjustments to the new collective bargaining agreement on Friday, details continue to emerge. This could potentially be one of the most important.

The temporary IR will see players with a positive test placed immediately, Rapoport reported. Said player’s return is then subject to medical clearance. Thereafter, a team is allowed to promote a practice squad player to fill the roster spot and can return that player to the practice squad without waivers. IR is unlimited and allows the “desired and necessary roster flexibility,” Rapoport added.

It’s not far-fetched to call Adams a hybrid of former Seahawks legends Earl Thomas and Kam Chancellor. He’s that good.

Joining the ball-hawking Quandre Diggs in the secondary, the arrival of Adams could give the Seahawks the best safety tandem in the entire NFL. Both players excel at creating turnovers and offer diverse skill sets, providing much-needed flexibility for Carroll and defensive coordinator Ken Norton Jr., who should be able to concoct some fun three-safety looks with Marquise Blair on the field as well.

Shaheen, a 2017 second-round pick out of Ashland, has been a disappointment in his three years in Chicago due to injuries and ineffectiveness. He has 26 catches for 249 yards and four touchdowns in 27 career NFL games.

The Dolphins are taking a low-risk flier on Shaheen, who will compete with Durham Smythe and Michael Roberts for the backup tight end role, behind starter Mike Gesicki.

A strong-armed athletic talent out of Oregon with prototypical NFL size at 6-foot-6, 235 pounds, Herbert threw for 3,471 yards with a 66.8 completion percentage and 32 touchdowns to just six interceptions in his senior campaign for the Ducks.

Chiefs head coach Andy Reid threw his support behind Duvernay-Tardif when he spoke to the Kansas City media on Saturday.

“I’m a huge Larry Duvernay-Tardif fan,” Reid told reporters. “I also was raised by a doctor, so I understand the dedication that it takes to be a doctor — we’re all blessed to have doctors in our lives. They’re givers; they not takers. They’re givers, and they’re healers, so they want the best for you. So Larry has that quality, and you’re seeing it to the utmost here. I just think it’s tremendous dedication to his profession, what his future’s gonna be, and mainly to the people that he gets to help.

This is significant. It means that for COVID-19 purposes, the practice squad serves as extra roster spots, since a player will not have to pass through waivers to return to the practice squad if he is promoted to replace an active-roster player having COVID-19. https://t.co/dqGnn9cANf