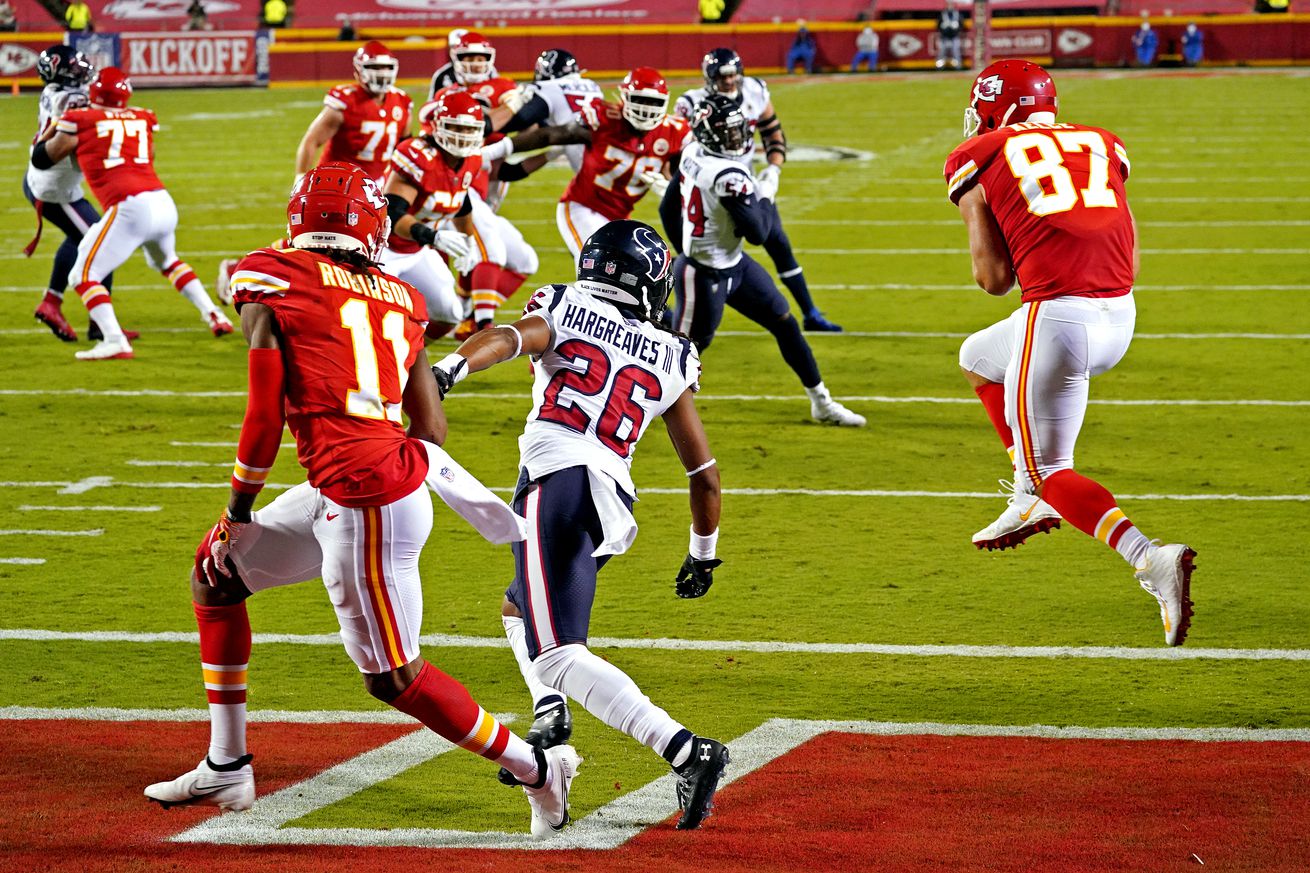 NFL Week 1 grades from around the league | YardBarker

Having already lost Kendall Fuller in free agency, the Chiefs have Bashaud Breeland out due to a suspension until October. No. 1 cornerback Charvarius Ward suffered a broken hand in Week 1 and underwent surgery. While Ward may attempt to play with a cast, corner is the Chiefs’ weakest spot. They did receive a solid effort from fourth-round rookie L’Jarius Sneed on Thursday. Sneed being effective would certainly qualify as a “rich get richer” development, but the defending Super Bowl champions will need more quality work from their pass rush to compensate. The Ravens loom in two weeks.

This time the Chiefs quarterback’s foundation donated $15,000, matched by another $15,000 from Turn the Page KC, to kick off a fund to provide hazardous-duty pay for early childhood educators working through the pandemic.

With $30,000 so far for the educators, Turn the Page, along with the KC Early Education Funders Collaborative, is asking the community to contribute too. The collaborative is made up of 12 philanthropic groups that support improving access to quality early childhood programs in Kansas City.

After Week 1, it looks as if Hardman could be that man. Of course, things can change considerably week to week, and we want to be up front that the Chiefs could easily give Hardman a dozen targets against the Chargers in Week 2. Drawing conclusions on a single game is a lazy approach, so that’s certainly not what we’re advocating here.

Instead, what’s important to note is that the nature of limited targets, the reality of a team only having 8 to 11 or so drives in a game, is going to shortchange someone. For most teams, the notion that WR3 or WR4 won’t receive but a handful of reps is no problem. That player is usually a special teams maven, a developmental prospect, or an aging veteran. For the Chiefs, it forces someone to set aside personal ambition for something bigger, and that means that Hardman, for example, is going to have a stat line like 1 catch for 6 yards from time to time.

Last season, Hardman was a revelation for the Chiefs. A second-round hit for general manager Brett Veach, Hardman not only made the Pro Bowl in his rookie season but he was named a second-team All-Pro as a kick returner by the Associated Press after averaging 26.1 yards/return—including a 104 yard touchdown.

Andy Reid coaching against an AFC West team is almost unfair at this point. Since 2015, the Chiefs have gone 27-3 straight-up against divisional opponents and 21-8-1 ATS. The Chiefs have also dominated the Chargers, going 11-1 straight-up in their past 12 games (8-3-1 ATS). The Chiefs have also covered in 10 straight games, including the playoffs, dating back to last season. As for the Chargers, they’ve been one of the worst bets in football dating back to Week 10 last season. In that span, they’ve gone 1-5-2 ATS.

According to Michael Rubin of Fanatics, NFL sales were great to start the season. He announced that Fanatics saw a 35-percent increase in sales for the opening weekend versus just one year ago. The merchandise retailer set a new record for its best ever start to the NFL season.

“Football is back!!” Rubin wrote. “@fanatics NFL sales jump more than 35% for opening weekend vs last year, setting a record for best start ever to the NFL season.”

As for the top-selling NFL jerseys, there were five players who stood out from the crowd. Per ESPN NFL insider Adam Schefter, the top-selling jerseys belonged to Tom Brady, Cam Newton, Patrick Mahomes, Lamar Jackson and Nick Bosa.

Half the country, including Michigan, picks Chiefs to repeat as Super Bowl champions | M Live

More than half the country, including Michigan, think the Kansas City Chiefs will repeat as Super Bowl champions.

That’s according to an analysis of Twitter chatter conducted by the NFL team at betonline.ag, which has tracked tweets since Sept. 1. More than 120,000 tweets about winning Super Bowl LV (55) and the associated team were tracked.

Fresh off win, Ben Roethlisberger ‘just so excited’ to be leading Pittsburgh Steelers yet again | ESPN

“There obviously were a little bit of jitters, I was excited and nervous to be out there,” Roethlisberger said after the game in East Rutherford, New Jersey. “I just wanted to not let my guys down, that was the biggest thing.”

Roethlisberger looked most like his old self in an abbreviated two-minute drill just before halftime, leading the Steelers on an eight-play, 78-yard drive capped with a touchdown throw to James Washington on which the third-year wide receiver muscled his way into the end zone for the score.

Gostkowski mentioned taking his shoe on and off at one point, trying to figure out was going wrong on this bad night.

“When I’ve been practicing in the summer, I practiced without socks all summer and then I started putting ‘em on,” Gostkoswki said. “I mean, I would’ve taken my pants off to make that last kick, to try something different. I wasn’t doing very well, I had to switch something up, maybe just for mental sake. You know, just kind of a weird quirk I guess.”

Sunday wasn’t the explosion that Week 1 of 2019 was for reigning MVP Lamar Jackson. But trust this—the Ravens staff saw some pretty significant, and important, steps forward from the third-year quarterback. And one example that was raised to me came in the final 41 seconds of the first half, with Baltimore taking possession at its own 31.

Now, one of the criticisms of the Ravens’ offense, as it’s constituted now, has been how it’s not built to come from behind. To do that, your team needs the ability to throw the ball when the other team knows you’re throwing it. And in this spot, with 69 yards to cover in 41 seconds, that really was the challenge for Jackson. Safe to say, he surmounted this one.

The Week 1 Overreaction Index: What’s Real and Not Real From the NFL’s Opening Slate? | The Ringer

Like the sun, or Medusa, do not stare directly at Mitchell Trubisky’s highlights. Watch them this week and you’ll see Trubisky floating a perfect pass into Anthony Miller’s arms to take an improbable late lead and a win over the Detroit Lions. It was just the second time the Bears came back from a 17-plus-point deficit in the fourth quarter since 1940. The highlights make Trubisky look like the hero. But in this game, he was the hero in the same way that someone who spills your drink and then buys you another one is a hero. Trubisky completed 20 of 36 passes for 242 yards, three touchdowns, and no interceptions, and was sacked just once, but like Rodgers, his numbers don’t tell the whole story.

Gardner Minshew was as statistically perfect as his whole look.

I’m not sure if a look can be “statistically perfect,” but I’m going with it. Dude obviously didn’t get the memo the Jags were going to suck this year, because he lit it up for the only NFL fans allowed to be in attendance this week.

This is going to be one of those games that gets overlooked a ton because it’s the Jags and Colts, but my god Minshew was incredible. 19/20, 173 yards, 3 TD, 0 INT — he found ten different receivers in the process, and ran for another 19 yards on the ground.

It wasn’t long ago that everyone wrote off the Jags as being one of the worst teams in football this year, then they do this. Jacksonville’s top two receivers were Keelan Cole Sr. and Laviska Shenault Jr., both of which sound like made up names from those iconic Key & Peele sketches.

Jacksonville might honestly be a team to watch this year. Seriously.

The Winners and Losers of NFL Week 1 | The Ringer

It probably seems like the NFL’s offseason was longer than normal. Time has a way of slowing down when you spend every single day inside to avoid infecting other people with a deadly virus. But while every other major American sports league featured some sort of interruption or delay, the NFL was adamant that it would start in early September as previously scheduled. I never thought they’d be able to pull it off.

But this weekend, every single person the NFL tested was cleared to go:

Reid liked what he saw from newcomers Kelechi Osemele and L’Jarius Sneed.

The eight-year veteran in Osemele brings some power to Kansas City’s offensive line.

“[Laurent Duvernay-Tardif] was a little bit that way too and (Andrew) Wylie’s got some of that in him too, but it’s good to add it,” Reid explained. “It’s good to be able to put another guy in there with his experience I think and his attitude about playing. I mean he plays, and he plays aggressive and you have to love that. I’m not saying we haven’t had it before, but what an addition to be able to put it in there, and I think his thing that’s followed him throughout his career has been, you play against him, you better strap it on because he’s going to bring it to you every down and it’s going to be aggressive and he’s going to do it to the whistle and that whole thing. So, I appreciate that. I think you’ve got to have that up front and it’s a good tempo setter.”

Osemele played every snap for the offense, and Sneed earned 55 defensive snaps (93%) in his NFL debut.

“Like all the rookies every practice, if they can get in, good and then if you can get them in the game, even better,” answered Reid when asked about Sneed. “The speed of it is so much more magnified once you get in there that you’ve got to get used to it and that ends up being, I think, important for all of them, but he’s had good growth.”

Patrick Mahomes got BETTER in the offseason.

“He showed some growth. Not that he hasn’t been good at it but he was even better Thursday night.” pic.twitter.com/mU8yJHGmXU