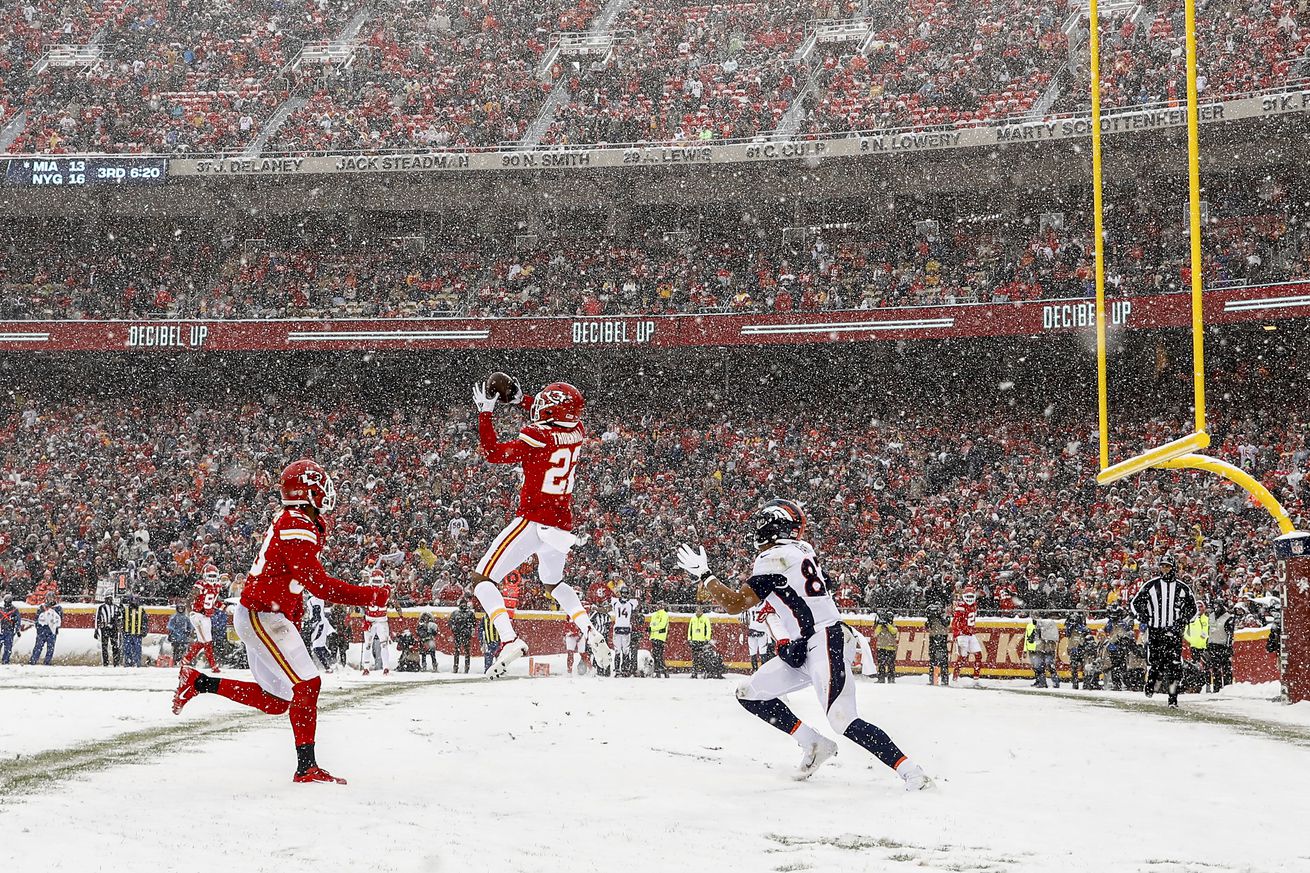 Tyrann Mathieu is obviously the heart and soul of this Chiefs defense, but Thornhill can lay claim to some other essential organ. His rookie season produced three picks, an opposing completion percentage below 50, significant snaps at free safety, box safety and slot cornerback, and five pass breakups. In Steve Spagnuolo’s defense, safeties have to be cerebral and versatile, and Thornhill fits the bill.

The deal priority rating here reflects that the Chiefs used the franchise tag on Jones (set to pay him $16.1 million), which draws some parameters on the deal terms for securing his services but also leaves the opportunity for Jones to earn more money next season on an average annual basis than he would this season (Jones’ trajectory is increasing). A second-round pick in 2016, Jones has ascended to be my model’s third-best projected interior defender, a ranking he achieved over the past two seasons, as well. Jones’ efficiency on passing downs (as with his 24.5 sacks over the past two seasons) is easy to see on film. Jones’ help against the run last season in coordinator Steve Spagnuolo’s defense drove even more value for the Chiefs, as he ranked sixth in my computer vision defensive run-stopping metric among interior defenders. This means when a back ran into the space near Jones, he helped stop their ability to earn first downs and touchdowns at the sixth-highest rate at his position.

“People want to go ‘Well why wasn’t (Patrick Mahomes) number one (in Simms’ rankings) last year? Why was Aaron Rodgers number one going into the 2019 season?’ and here would be my big reason,” Simms said on ProFootballTalk Live Thursday morning. “2018, yes, Mahomes may be a better playmaker thank Aaron Rodgers, no doubt about it. My big thing would have been this, Mike. I think if Aaron Rodgers was the quarterback of the Kansas City Chiefs in the AFC Championship game against the Patriots that year, the Chiefs would have won the game.

“I think Mahomes being the better playmaker wasn’t great enough at that point to me to make up for the lack of experience that he had compared to Rodgers. I don’t think that Rodgers would have been fooled by some of those Patriots coverages and things we have talked about many of times in that AFC Championship game at that point.”

PFF recently shared their highest-graded receivers since 2006 on targets downfield of 20 or more yards. Hill, of course, was the only player to receive a 99.9 grade and he faced some stout competition. He’s up there ahead of players like Julio Jones, A.J. Green and DeSean Jackson who were all premier receivers in the NFL at the height of their careers.

One big difference between these four players is that Hill has only been in the league since 2016. Jackson was drafted in 2008, while Green and Jones both were taken in 2011. Hill hasn’t had the same amount of opportunities as those players to rack up targets downfield, yet he’s still graded at the top.

Can the Broncos make a statement?

Denver is slated to appear on the back end of a “Monday Night Football” doubleheader in Week 1 and again on “Thursday Night Football” in Week 4. Both games are a chance for the Broncos to play on national TV, but this “Sunday Night Football” showdown against the Chiefs will dwarf both audiences. The main objective of this game — like any other — is to earn a win. But there’s no question that on the NFL’s biggest stage, the Broncos would be well-served by turning in an impressive performance. Winning in Arrowhead Stadium in December — something just three Broncos quarterbacks have been able to do since the 1990s — would send a message to the AFC West and to the league that this young team is ready to compete for more than just a playoff berth. The pressure of “Sunday Night Football” will be new for players like Drew Lock, Courtland Sutton and Bradley Chubb. Can they live up to the hype?

Fun fact: Harrison Butker was originally drafted by the Carolina Panthers, and it’s probably safe to say that the Panthers are kicking themselves for losing this kicker, who has developed into one of the NFL’s top players at his position in just three years. Despite the fact that he’s only been in the league since 2017, Butker has already proven himself to be one of the best kickers. In three seasons with the Chiefs, Butker has hit 89.7 percent of his field goals (62 of 69), which makes him the second-most accurate kicker in NFL history behind only the guy who’s ranked at the top of our list.

Butker was a huge weapon for the Chiefs in 2019, and he was a big reason why Kansas City was able to earn a bye in the playoffs. One reason the Chiefs got that bye is because of a 23-16 win over the Patriots in Week 15 where Butker scored 11 points with three field goals and two extra points. Butker also came up big with in 26-23 win over the Vikings in Week 9, a game where he scored 14 points, which included making two pivotal kicks — a 54-yarder with 2:36 left that tied the game and a 44-yarder that he hit as time expired. Butker closed the season by hitting 17 straight field goals, including the playoffs.

Although that streak doesn’t include offseason kicks, it probably should, and that’s because Butker hit a 77-YARD FIELD GOAL while practicing with himself back in April.

Windy day in Kansas City, but never going to pass up the opportunity! #77yards pic.twitter.com/wyy4nJwNu1

This isn’t the first time Stafford has worked out with teammates this offseason. Receiver Danny Amendola said he flew to Georgia in the spring to get workouts in with his quarterback. Stafford also got work in with running back D’Andre Swift, receiver Quintez Cephus and tight end Isaac Nauta in Georgia when he was in Atlanta.

As Stafford has practiced, he has made adjustments due to COVID-19.

“Conscious efforts trying not to lick my fingers before I get the ball or throw it,” Stafford said in May. “All those kind of things are things that I would have never thought I would have had to think about, but at the moment, I am.”

“We have over 2,000 players, even more coaches and staff. We can’t do that,” Jenkins said. “So we’ll end up being kind of on this trust system, the honor system, where we just have to hope that guys are social distancing and things like that. And that puts all of us at risk, not only us as players and who’s in the building, but when you go home to your families. You know, I have parents that I don’t want to get sick.

“And I think until we get to the point where we have protocols in place, and until we get to a place as a country where we feel safe doing it, we have to understand that football is a nonessential business. And so we don’t need to do it. And so the risk has to be really eliminated before we — before I — would feel comfortable with going back.”

Rosters will already be cut from 90 to at least 70

I got the distinct impression from chatting with Troy Vincent, the league’s VP of football ops, that carrying 90 bodies into camp might not make the most sense. “It’s a numbers game,” as he put it to me, and these teams only have so much real estate to work with at their facilities. Coaches don’t love this idea … but John Harbaugh and Sean McVay have also indicated how “impossible” it may be to meet the protocols as is. Something has to give here, and it will take massive efforts to get some of these buildings to comply with spacing and testing restrictions even with 53-man rosters. “We’re already bracing for it,” one NFC personnel man told me. “I get it. Most teams could get down to 70 or 75 pretty quickly, and without four preseason games you don’t need those numbers anyway.” One AFC exec said: “It actually would be a good thing for the rookies. Think about it – are you going to cut your sixth- or seventh-round pick without getting a chance to look at him?”

Leonard said toward the end of their meal he and his group were approached by the manager of the restaurant.

“He came up with a terrible attitude, asking us did we have a problem,” Leonard said in a video posted to Instagram. “So, we’re all lost, trying to figure out what’s going on. He said that a White guy said we were verbally abusing him, talking trash to him. It was basically a lie. We basically got kicked out of Chipotle because of that. And they said they were going to call the police, or they wanted to call the police on us. That’s what being Black in America is right now.”

Teams having conversations with associates of Colin Kaepernick | NFL.com

“Teams are circling around here getting closer, I believe, certainly closer than they’ve been in recent years,” Garafolo said on NFL Network. “Now you might say why not just go directly to Kaepernick, go directly to his agent? Why do you have to play this game where you’re working the periphery — just more of the same? That would be a fair point. My understanding, at least to explain it from a team’s perspective, is they’re still doing their homework, still doing their research. When they get to the point where they’re confident enough that they think they can work out a contract, that’s when there’ll be direct communication with the agent. But for now … we all see more positive signs that Kaepernick could be back in the league soon.”

Four Chiefs who could have bounce back years in 2020

The forgotten man on the Chiefs defensive end rotation has a reputation as a very solid starter in the league. Injuries plagued his 2019 season. He appeared in 10 games prior to going on injured reserve. Okafor logged five sacks but did not appear to be as strong of a run defender as was his reputation. His replacements all seemed to make significant impacts, including Emmanuel Ogbah and Terrell Suggs, which caused many fans to question Okafor’s value to the team. With both of those guys gone, Okafor will have every opportunity to regain his hold on the starting job. His main obstacles might be the continued development of Tanoh Kpassagnon, who stepped in and played pretty well last season, and a certain recently-signed free agent with similar production..