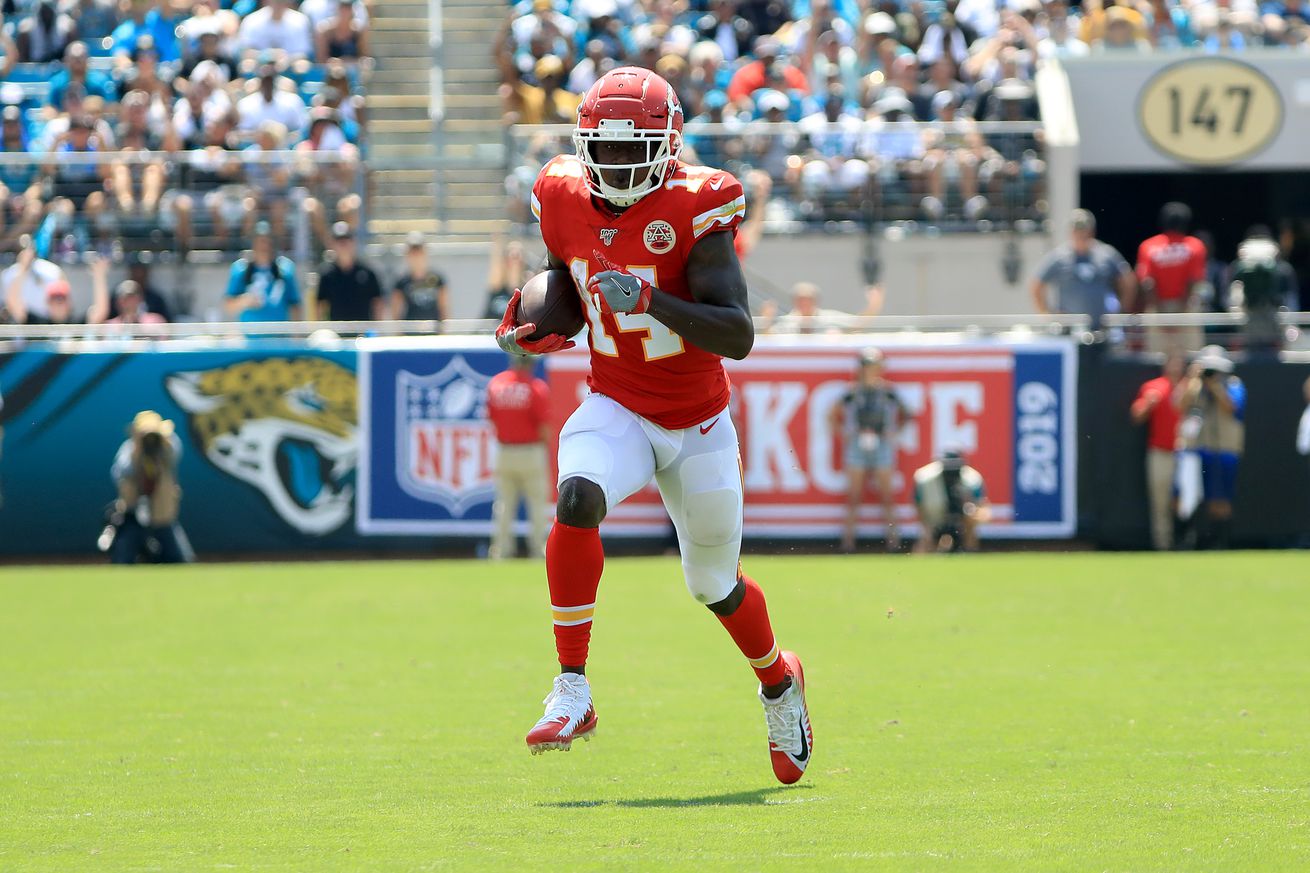 But the Chiefs have been especially good at scoring points in their season opener the past three seasons. They put 42 on the New England Patriots in the first game of 2017, when Mahomes was a backup and did not play, 38 on the Los Angeles Chargers in 2018 and 40 last year against the Jacksonville Jaguars.

That’s 40 points per game over three openers, or about 10 points more than they averaged in regular-season games over the past three seasons. Mahomes has thrown for 634 yards and seven touchdowns in the past two openers.

After Damien Williams opted out of the season, it was an open question whether the Chiefs would bring in some help to take some of the pressure off first-round pick Clyde Edwards-Helaire. That didn’t happen, with ex-Raider DeAndre Washington serving as the main addition to the backfield. Now Washington finds himself looking for a job once again, as Kansas City has decided to keep just Darrel Williams (not to be confused with offensive lineman Darryl Williams, who was cut) and Darwin Thompson at running back behind the rookie. Neither was effective carrying the football last year, with Williams averaging 3.4 yards per carry and Thompson not much better at 3.5. This could be a position of focus as the Chiefs sift through the cuts made around the league over the weekend.

Chiefs are hoping for the Raiders’ version of Osemele, when he was named to two Pro Bowls and the 2016 All-Pro team.

One of three offensive players to start every game last season (Kelce, Schwartz), Reiter has solidified his role on the Chiefs’ offensive line.

After returning from an injury, Wylie lost his starting job to Stefan Wisniewski for the playoff run. “It was hard,” Wylie said. He gets a chance to reclaim his job.

Why the Chiefs’ dynasty talk is an uphill battle. And why they could make it work | Kansas City Star

Repeat winners used to be commonplace in the NFL. From the league’s inception, too. The Green Bay Packers won the first two Super Bowls in the ‘60s. The Miami Dolphins went back-to-back in the ‘70s. The Pittsburgh Steelers repeated twice more in the same decade. The San Francisco 49ers in the late ‘80s. Then the Dallas Cowboys’ reign in the early ‘90s.

But in 1994, the NFL instituted the salary cap. It lived up to one of its intentions — it leveled the playing field.

In the salary cap era, 26 teams have won the Super Bowl. Among the initial 25, only two won it again the next season. The Denver Broncos went back-to-back in the 1997-98 seasons, and the New England Patriots did it in the 2003-04 seasons.

Fortson is one of the intriguing names. The Chiefs originally tried the 6-6, 230-pound athlete at tight end, but he turned heads during this season’s training camp at wide receiver.

“That’s allowed him to play faster and play more physical and let his natural talent show,” wide receivers coach Greg Lewis said. “He’s done a tremendous job of that throughout this offseason.”

If the Chiefs want to ensure they keep a player like Fortson, teams are allowed to protect up to four practice squad players each week.

The newcomers awarded to the team off waivers are defensive back Adrian Colbert and tackle Jackson Barton, both from the Kansas City Chiefs, and wide receiver Damion Ratley, from the Cleveland Browns.

Peterson will reunite with offensive coordinator Darrell Bevell, who was his first coordinator with the Minnesota Vikings way back in 2007. He immediately comes in and will contend for the power back role, which appears to be currently held by Bo Scarbrough. At this point, there has been no corresponding move announced, so it’s unclear if Scarbrough’s job is safe.

Though he’s 35 years old, Peterson is coming off a somewhat successful year in Washington. He rushed for 898 yards (4.3 YPC) and five touchdowns.

How he’ll fit in the rotation with second-round pick D’Andre Swift and Kerryon Johnson remains to be seen, but for now, the Lions got themselves a pretty talented running back that gives their rushing attack a new dimension.

Jadeveon Clowney agrees to join Titans on 1-year deal worth up to $15 million, source says | ESPN

Clowney is reuniting with Titans coach Mike Vrabel, who was his position coach and defensive coordinator when the two were with the Houston Texans.

The seventh-year veteran had his best season in 2017 when he played in Vrabel’s scheme for the Texans. Clowney posted career highs in sacks (9.5), tackles for loss (21) and QB hits (21) that season.

The 27th overall pick in the 2017 draft, White has been a starter in Buffalo since his rookie season. As a rookie, White broke up a whopping 18 passes while recording four interceptions. An All-Pro last season, White led the NFL with six interceptions while also breaking up 17 passes. His play helped the Bills secure a playoff appearance for the second time in his three seasons with the team. According to Pro Football Focus, White in 2019 was the first player in its 14 years of analysis to lead the league in interceptions while not allowing a touchdown.

While he could have waited a season before having the chance to test the market, White instead chose to stay in Buffalo, a team that has become a trendy pick to win the Tom Brady-less AFC East in 2020.

Aiyuk was a first-round pick for the 49ers, and he will find himself in a great position to succeed right out of the gate. Deebo Samuel’s status for the start of the season is in question due to an injured foot, Emmanuel Sanders is now in New Orleans, and Jalen Hurd is out with a torn ACL. With so many questions at wide receiver, Aiyuk is a virtual lock to start the season as the top option for coach Kyle Shanahan. Speaking of Shanahan, he’s on the record saying Aiyuk was his favorite wideout in the entire 2020 NFL draft. A great fit for the offense due to his skills after the catch, Aiyuk is a tremendous player to target late in your drafts.

Brett Veach: the Chiefs have ‘some good young corners’

But Chiefs general manager Brett Veach — fresh off his 2020 team-building assignment — doesn’t seem to be that worried about the young (and new) players the Chiefs will have guarding their opponents’ best receivers.

“We were certainly encouraged by the way these guys played,” Veach told reporters on Sunday. “Most of you have seen these guys grow and develop. Obviously, we always keep open dialogue — and we’re always looking to improve our roster — and [bringing in veteran cornerbacks] was something on our mind early on in camp. And as camp progressed — and these guys really [started] to make some big movements in regard to their development — we became encouraged.”

Patrick Mahomes, on his excitement this year, coming off a Super Bowl win, compared to years past: “I’m just as excited. I can promise you that.”