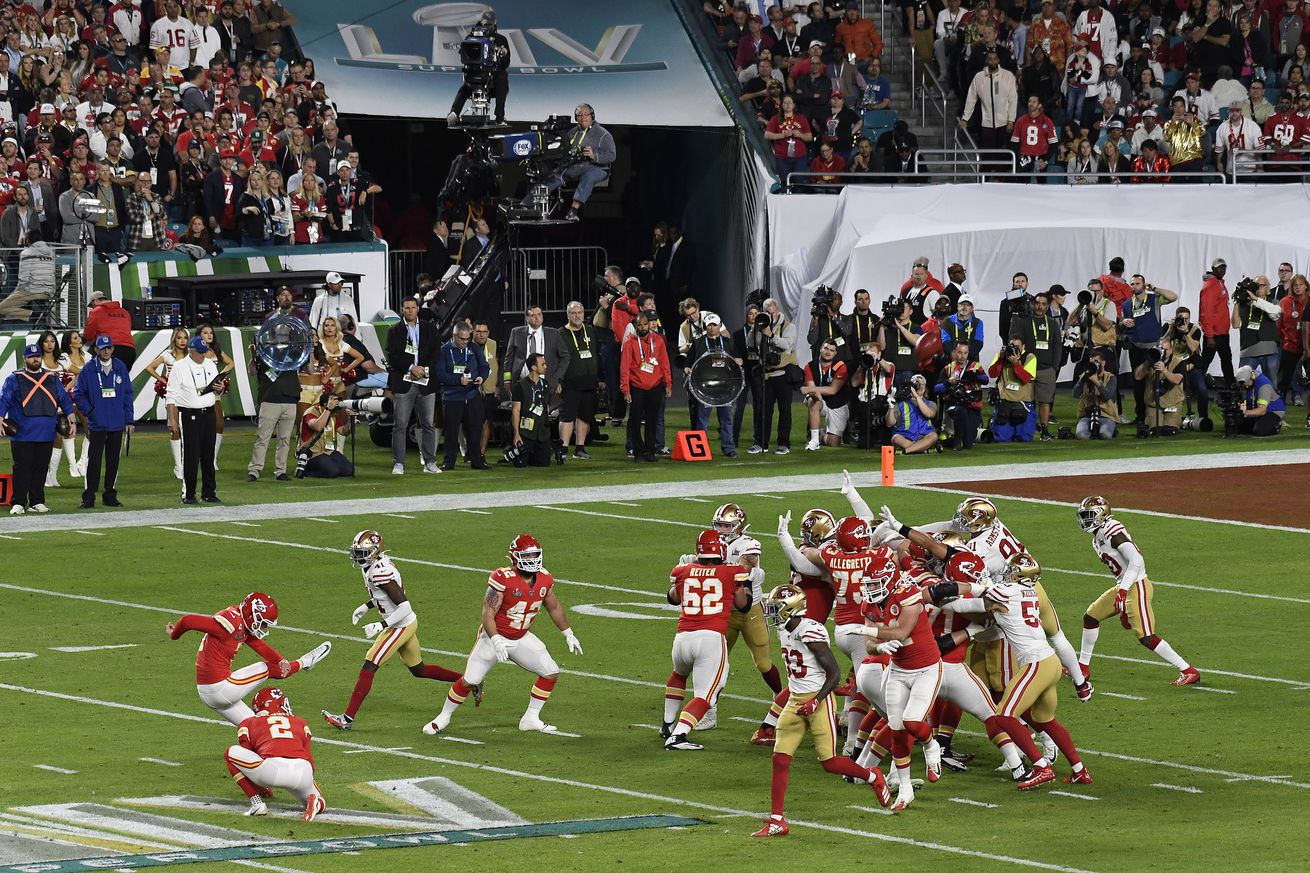 Are long field goals next frontier for the Chiefs’ Harrison Butker? | ESPN

But his 77-yard try, even under favorable conditions, makes it natural to wonder whether the next frontier for Butker is longer kicks, maybe even threatening the NFL record for longest field goal of 64 yards, set by Denver’s Matt Prater in 2013.

“In terms of the NFL record, there are a ton of kickers that have the leg to make a field goal … in a game situation,” Butker said. “It’s just, does the coach want to put the kicker out there, because if he misses, now the other team gets the ball with great field position? So you kind of have to get set up with end-of-half, end-of-game situations. I don’t think we’ve had that situation where it would have been that long of a field goal. But I think definitely when it’s warm out, I’d be prepared to make that kick.

“I feel super comfortable kicking from distance. Obviously, we’re not going to be kicking field goals from [77 yards] most likely in a game, but it’s going to help me a lot when it’s a 55-yarder, wind’s in your face in January and February. That’s what I’m training for, to be able to make those kicks.”

When the Super Bowl kicked off Feb. 2 in Miami, Mills, like many of us, was planted in front of the TV. Not far from where she sat was the No. 100 jersey given to her by the Chiefs and NFL at KC’s 2019 home opener at Arrowhead Stadium. She was celebrated before that game for being a centenarian and Chiefs fan as long for as she can remember.

Now 101, with Mahomes and Chiefs about to take on the San Francisco 49ers, she’d donned a gown and was sitting in her chair in Bonner Springs, Kansas, for kickoff. But as the Chiefs started to struggle, she grew concerned and decided it was time to bring in what some Chiefs fans had already dubbed “Melba Magic.”

“And wouldn’t ya know, they started scoring,” Mills said.

Could the 2011 Lockout Give Us One Hint Why The Patriots Wanted Cam Newton? | SI

With the NFL football ops tweeting out July 28 as the start date for training camp, it’s worth noting that the Chiefs and Texans open earlier—the rule under the new CBA is teams can start 47 days before their opener. Since Houston and Kansas City are playing in the kickoff game, both will start camp on July 25. The Texans are welcoming in their rookies on July 18, and have the quarterbacks coming in on July 20. Chiefs QBs and rookies report on the 22nd.

Will Shields is known as one of the best offensive linemen in the history of the NFL. Kansas City selected the future Hall of Famer in the third round of the 1993 draft. He would go on to play in every single game of his career since he made his debut. He only missed one start his whole career.

Shields was a 12-time Pro Bowl guard and a two-time First-Team All-Pro selection. He was named the 2003 Walter Payton Man of the Year and was inducted into the Pro Football Hall of Fame in 2015.

The Atlanta Falcons will need to improve their defense to compete in 2020. Atlanta had the 22nd ranked passing defense in 2019 and did not really address their issues in the off-season. If the Falcons are to have a successful 2020, Matt Ryan and the offense will have to put up some points. Their most difficult match up will be against the fast-paced, Super Bowl reigning champions, Kansas City Chiefs. By Week 16, each team’s postseason hopes will most likely be in focus. This could lead to each team not putting their best effort forward but expect Patrick Mahomes to still score at will. In addition, with only one team in each conference getting a bye in the first round of the playoffs, the Chiefs could still have something to play for in Week 16.

Clark’s pass rush skill set as a speed rusher, seems to be a lesser known quality. The explosiveness he displays off the snap, along with agility, arm length and heavy hands fits defensive coordinator Steve Spagnuolo‘s tendency at defensive end. Clark brings an even more impressive form of power to the table. When that combines with his speed, offensive tackles are doomed.

It is also important to note how technically sound this Chiefs pass rusher is. Doing this consistently is not always easy or present. However, Clark understands how to break down opposing offensive tackles with his blend of pass rush counters and never say die attitude.

Mahomes’ production slipped in his second season as a starter amid injuries to him and multiple receivers, but just look at his playoff numbers: 300.3 passing yards per game and 12 total touchdowns (10 passing, two rushing). And during the regular season, only Lamar Jackson, Drew Brees and Dak Prescott posted more games of three-plus TD passes. A healthier Tyreek Hill plus first-round RB Clyde Edwards-Helaire can only make Mahomes more dangerous.

The series, “Colin in Black and White,” will explore the quarterback’s high school years, attempting to show the experiences and insights that led to his activism.

Kaepernick will appear as a narrator, with an actor playing him as a youth in the scripted drama of a Black child adopted by a white family.

“Too often we see race and Black stories portrayed through a white lens,” Kaepernick said in a release. “We seek to give new perspective to the differing realities that Black people face. We explore the racial conflicts I faced as an adopted Black man in a white community, during my high school years. It’s an honor to bring these stories to life in collaboration with Ava for the world to see.”

“Having DeForest come onto the team and help our defense out, he’s a complete dog. Watching his tape, he has a motor that doesn’t stop,” Leonard told NFL Network’s Colleen Wolfe during an apperance on NFL Total Access Monday. “You can not just focus on the linebackers, we got so many defensive linemen now that are gonna eat up on any offensive line that’s in front of us. I think that’s gonna allow the linebackers to run around, make more plays, take some stress off the defensive backs because they don’t have to stay in coverage so long.

“I’m definitely looking forward to him coming out here and, you know, bring that dog mentality that he’s had and help this defense win and be the number one defense in the NFL.”

To be fair, Newton’s deal does reportedly allow him to earn $7.5M if he hits all his performance escalators, which almost makes him as valuable as Marcus Mariota, who doesn’t need to jump through any hoops to get paid. It’s a ridiculous contract, no matter which way you look at it — and Richard Sherman is right to call out just how dumb this whole situation is.

But push the money to the side, ignore how underpaid Newton is, there’s a bigger issue at play for football fans to reconcile: how do we deal with the Patriots being cool? We’re used to the Patriots being smart, but we’re not used to them being cool. The “coolest” player the Patriots had in the last five years was probably Gronk, and let’s be real: the only people who think frat boy types are cool are other frat boys. The Patriots were (are) the nerd kings of the NFL. The starched shirts. The shined shoes. The sensible, boring, business-casual polo in a league where fans want Supreme. It’s impossible to imagine a bigger shift at quarterback personality wise from Tom Brady to Cam Newton, and that’s super weird.

It might be forgotten that the Chiefs defense finished seventh in points allowed per game last season. Nearly all its Super Bowl starters are returning, and it stands to improve as long as Chris Jones decides to play.

And on the other side, there is Patrick Mahomes and his unfair arsenal of weapons. The Patriots have neither. A 100% healthy Newton is not better than Mahomes, and for argument’s sake, even if he were on the same plane, he doesn’t have one of the game’s up-and-coming top receivers in Tyreek Hill, one of its best tight ends in Travis Kelce, Sammy Watkins, Mecole Hardman and too many running backs to name.

Newton’s best option is veteran wide receiver Julian Edelman. As it stands right now, it would be difficult to argue that Mahomes doesn’t have at least three better options to choose from. That is being conservative.

On this day of remembrance, @ChiefsReporter is joined by several guests to talk about the legacy of Joe Delaney