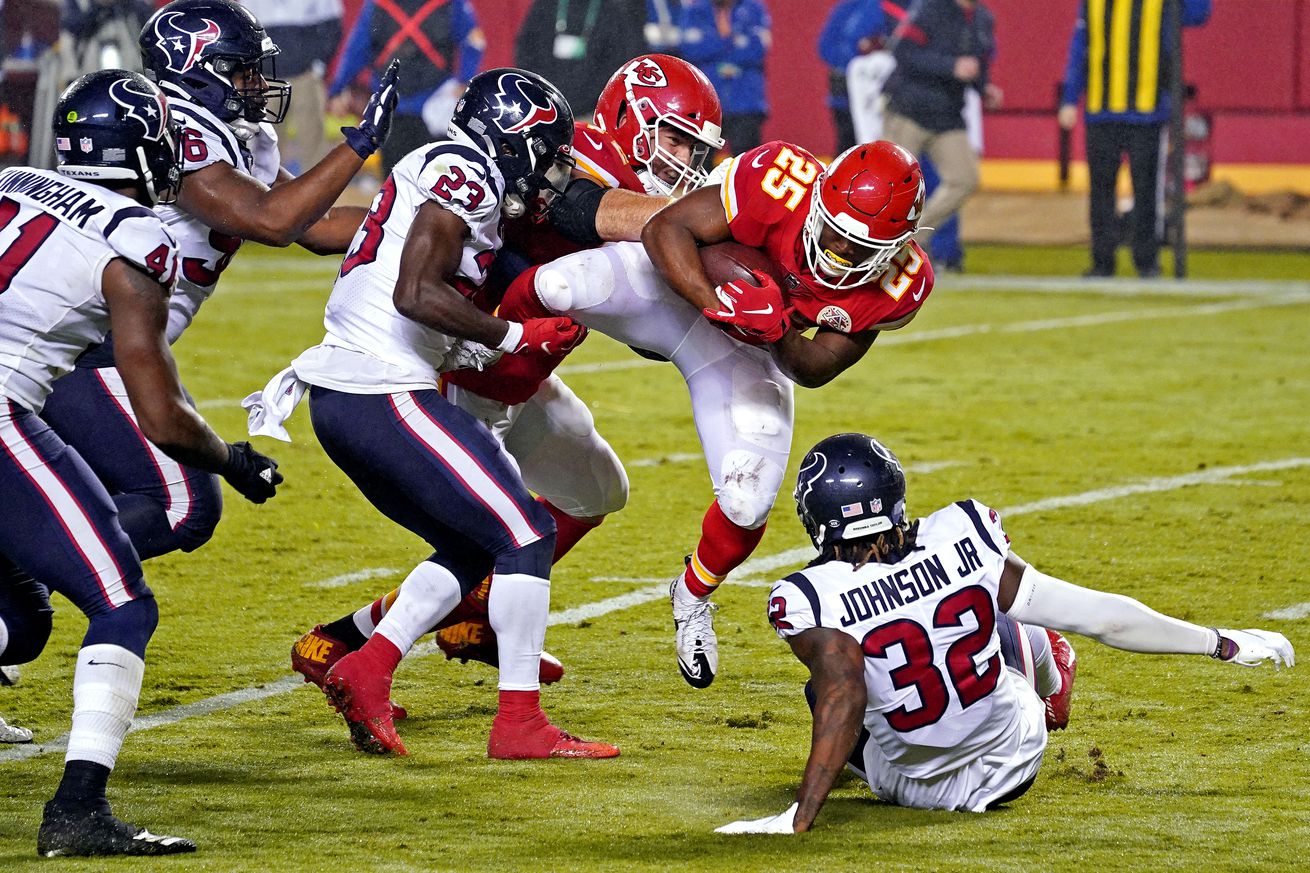 It feels like Edwards-Helaire’s debut was centuries ago because he played on Thursday Night Football. He carried the rock 25 times for 138 yards and a touchdown. The scary part is that the LSU product is more than capable of catching passes and Kansas City did not utilize him in that capacity this week.

The reigning Super Bowl MVP kept his stellar 2020 going with a dominant 34-20 win over Houston to kick off the season. It was obvious the altered offseason didn’t affect the passer, as he threw three TDs, one each to three different pass-catchers. There’s not much Mahomes hasn’t done in his two years as the Chiefs’ starting quarterback, and with his most talented supporting cast yet, we’re bound to see more highlight-reel plays and records fall.

The Chiefs didn’t have much trouble dispatching an overmatched Texans squad 34-20 on Thursday Night Football. But while the defending champs seemed to pick up where they’d left off last season, the way they dominated the game felt a whole lot different from what we’ve gotten used to in the Patrick Mahomes era. For starters, Mahomes was far less aggressive throwing the ball downfield than normal, attempting just one pass of 20-plus yards in the game (just the second time in his career he’s failed to throw deep more than once) while relying primarily on quick-hitting underneath passes. Even stranger, Kansas City scaled back its typically audacious pass-first philosophy and went with a more balanced approach, dialing up more run plays (34) than called pass plays (33) in the win―something Andy Reid did exactly zero times in the team’s 19 games last year.

2021 NFL Mock Draft: Jets land Trevor Lawrence but not at No. 1, Browns and Steelers target QBs too | CBS Sports

Owusu-Koramoah is listed as a linebacker, but you can find him all over the field. He can come off the edge and has the athleticism, speed and change of direction to be an asset in coverage.

Via Albert Breer of SI.com, Speaks was among five players the Seahawks brought in for visits or tryouts.

Speaks was the 46th overall pick of the 2018 NFL Draft. The former Ole Miss defensive end appeared in all 16 games as a rookie for Kansas City in 2018 with four starts. He recorded 24 tackles with a 1.5 sacks, a forced fumble and eight quarterback hits that season.

Black quarterbacks get an opportunity

A lot of the comments on our Facebook page questioned why it was a big deal that an NFL-record 10 Black quarterbacks started games in Week 1. It’s a big deal because for a long time, Black athletes were denied an opportunity to play the quarterback position. They were often asked to change positions, or simply not viewed as quarterbacks because team owners didn’t want them as the face of the franchise.

“It was an unwritten rule that the reason Blacks weren’t playing quarterback was because we weren’t smart enough,” former NFL QB James Harris told Newsday. ”We couldn’t lead. There was some concern about character. Throughout the country, there was that issue. We just didn’t have Blacks getting the opportunity to excel.”

After originally believing he could play through a high-ankle injury sustained in Sunday’s win over the Buccaneers, Thomas is now expected to miss several weeks, NFL Network’s Tom Pelissero and NFL Network Insider Ian Rapoport reported.

Fresh off setting the single-season receptions record last year, Thomas had just three catches against the Bucs, his ankle ailment likely playing a part in his production.

The All-Pro wideout’s original intent was to hobble through New Orleans’ upcoming Monday night game against the Raiders, but now it’s unknown when he’ll be able to return, but he is expected to miss multiple games.

As of now, there is no trade request from Robinson, Pelissero reported, but it is certainly a situation worth monitoring going forward.

Part of the reason for that is Chicago’s history of contract extensions. When the Bears want to keep a player, they usually get the deal done, signing extensions with Akiem Hicks, Danny Trevathan, Eddie Goldman, Kyle Fuller, Cody Whitehair, Bobby Massie and Charles Leno, among others.

The last major contract dispute (not involving a rookie deal) in Chicago dates back to 2007 and involved linebacker Lance Briggs, who ended up spending his entire career in Chicago before retiring in 2015. Jerry Angelo served as general manager back then, long before Ryan Pace was hired to his current post.

“We’ll see how these injuries go, but I love Sanu,” Shanahan said Monday. “He’s a hell of a player, so him being out there is always a possibility … I wouldn’t rule that out at all. He’s available and he’s definitely a guy I really respect and I think everyone in this league respects. So, we’ll see how it goes this week.”

Joey Bosa had himself a game. The same can’t be said about the offense. This week against the Chiefs could get U-G-L-Y.

The @Chiefs registered 24 QB pressures Thursday night against the Texans, accounting for ~ 10% of the pressures across all teams. Numbers from the next highest teams: @WashingtonNFL: 14@Falcons: 13@49ers: 12

The Chiefs pressured Watson on 60% of his dropbacks.