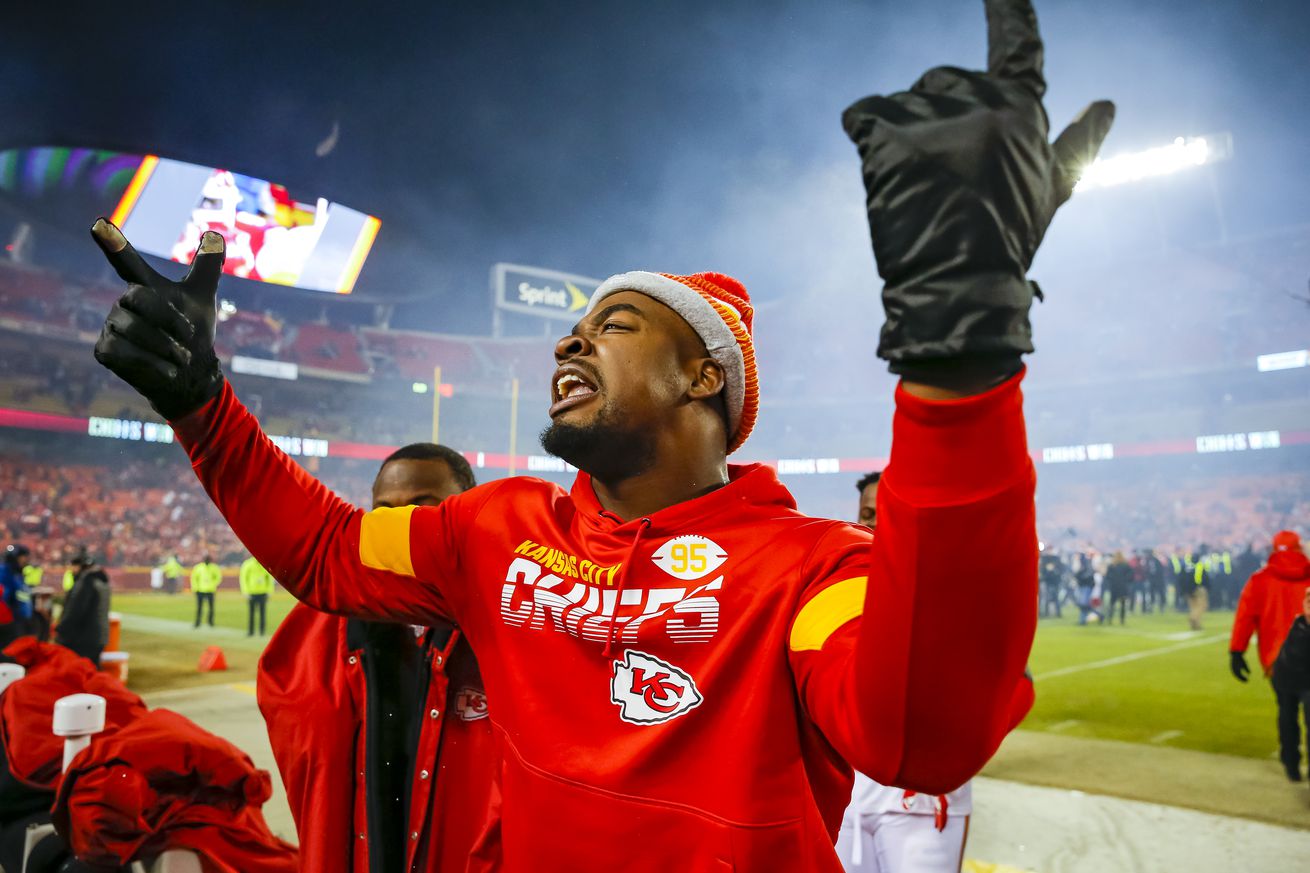 Coach Andy Reid and GM Brett Veach will always value and invest in the trenches. Blacklock is explosive and could be the replacement for franchise-tagged DT Chris Jones if the Chiefs decide to trade him.

Veteran player most likely to be traded at some point before or during the draft: Leonard Fournette

While I think he could go as high as 17th to the Cowboys as a Travis Frederick replacement, Ruiz makes sense here as the Chiefs could use an upgrade at center and left guard. A three-year starter at both center (26 games) and guard (five games), Ruiz sits atop my interior offensive rankings and has allowed just 19 pressures on 895 pass-blocking snaps since 2018, per PFF.

The Chiefs have to patch holes at multiple spots on their defense but taking the rangy, versatile Queen is the perfect start. Queen brings top-tier athleticism and budding instincts to the position, with chops as a coverage defender, blitzer, and run defender.

Stefen Wisniewski departed Kansas City in free agency, leaving the Super Bowl champions with Austin Reiter as the projected starting center. That’s not good enough. Ruiz is the consensus best center in the draft, and is stellar in pass protection.

Igbinoghene has all the athletic gifts to be a star outside corner in the NFL.

Three years ago this week, Saints were one pick from taking quarterback Patrick Mahomes | USA Today

“The one thing that stood out about Mahomes was, this player could climb, escape, throw from all positions,” Payton said during draft weekend 2017. ”We just saw him make throws going left, going right, through the pocket, up in the pocket, I mean, really unique throws.”

Despite posting some of the best numbers out of safeties at the 2014 Combine, Sorensen went undrafted. He landed with the Kansas City Chiefs where he played in nine games his rookie season. Then in 2015 he played in all 16 games and started to earn the nickname “Dirty Dan.” In 2017, Sorensen signed a contract extension with the Chiefs worth $16 million over four seasons. Last year, Sorensen played in every game to help the Chiefs win their first Super Bowl in 50 years.

At this stage of their respective careers, Mahomes is levels above Brady. From a mobility, arm strength and accuracy standpoint, that’s just the truth. At 42 years old, TB12 won’t come close to keeping up with the reigning Super Bowl MVP. Do people forget that the Chiefs didn’t lose a single playmaker from last season?

“We rarely talked about what his decision was gonna be, where I’m at,” Gronkowski said. “But we did talk about [it] for one second. I told him that — we talked just real quick — like, ‘Hey, I’m kinda getting that fire underneath me again.’

Williams’ trade value is likely at its highest in the next 24 hours. The expectation has been the 31-year-old tackle will only be moved for a significant return, presumably meaning a high draft pick in this year’s draft. Such a swap makes more sense than sending a future high pick to Washington for a tackle whose remaining career length is unknown, especially after he sat out last season and would still need to pass a physical before a trade is complete.

SEC might crush these two records in the 2020 NFL draft | NOLA.com

The Southeastern Conference is expected to shatter two of its own NFL draft records.

The football powerhouse could have as many as 16 players selected in the opening round Thursday night, a number that would top the previous mark of 12 the league set in 2013 and matched four years later. The SEC also could break its record of total guys drafted (64) set a year ago.

Patrick Mahomes reveals the three favorite plays of his career

MAHOMES: “Third-and-15 in a critical situation. I felt like that was the change of the momentum of [Super Bowl LIV]. There’s a lot of plays that really helped us win in the end down the stretch there. That was the momentum change in the game, and we got them on their heels and we were able to go down and score… that play in that situation —that was a huge play that I’ll forever remember.”

If the restructure is similar to the one given to defensive end Frank Clark in mid March — where a portion of Duvernary-Tardif’s base salary is converted to signing bonus and spread into the last three years of his contract — the move could clear as much as $3.7 million in cap space. His contract currently extends through the 2022 season, when he will be 31 years old.

Is there an equivalent to Michael Jordan in the NFL? The ATN heroes discuss on the latest podcast: https://t.co/o8cxkbdXPH pic.twitter.com/1toKYNkzNe