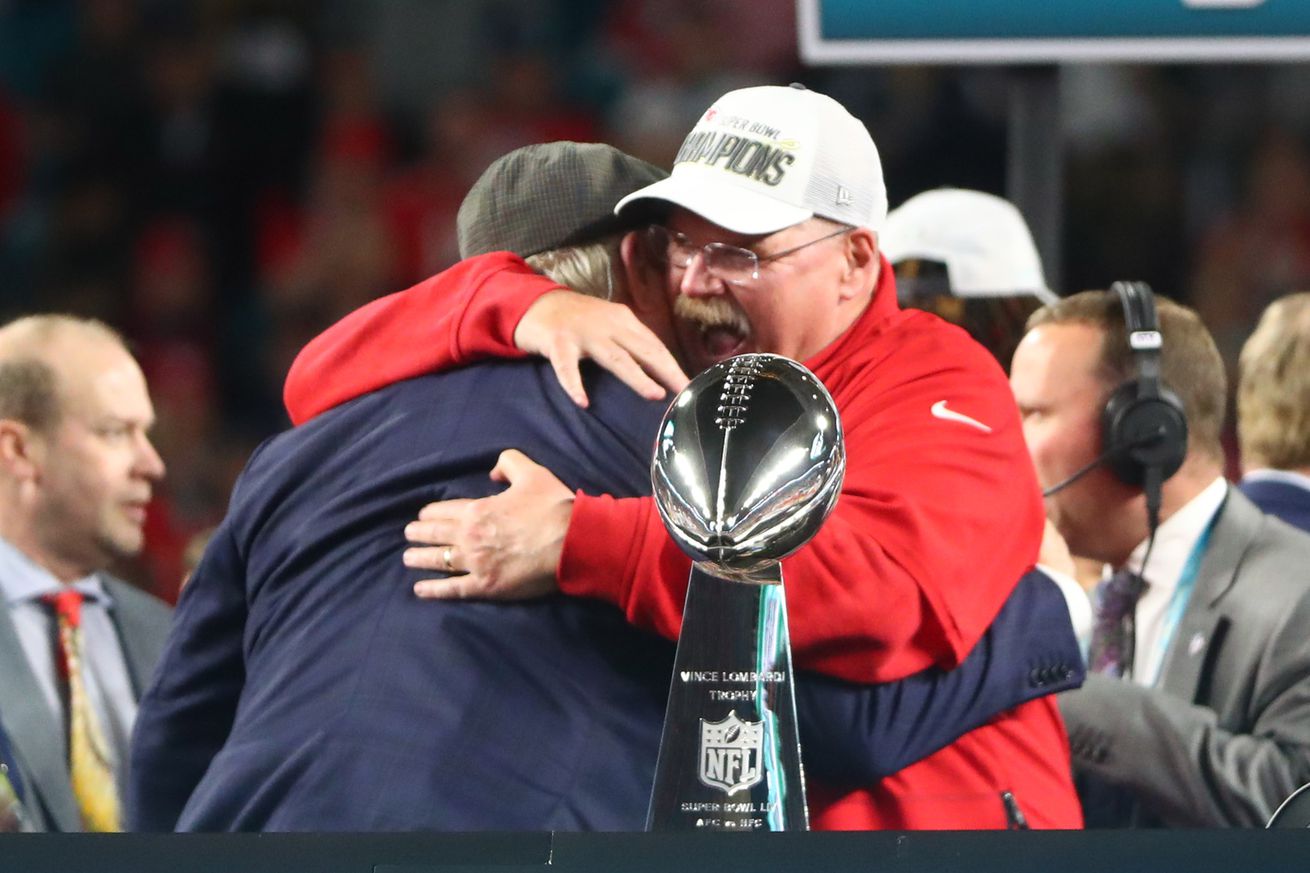 “The Super Bowl champions are coming, I think next week,” Trump said. “Soon. Very soon. And the coach loves us. The coach is great. Andy Reid. Every one of them want to be here.”

Kansas City coach Andy Reid said it would be “quite an honor” to go to the White House to celebrate the Chiefs’ Super Bowl LIV victory.

Kiszla: All Broncos need to beat Chiefs is five TDs per game. Is that too much to ask new offensive coordinator Pat Shurmur? | Denver Post

“They’ve lost eight games in the last two years. All of those games except one, the other team has scored 31 or more points, I believe. That paints a little picture there for you,” Broncos coach Vic Fangio said.

Well, counting the overtime loss to New England in the playoffs a year ago, the Chiefs actually have lost nine times during the past two seasons. But we hear you, Uncle Vic. Playing scared is no way to beat Mahomes. In his only losses as the K.C. starter since the outset of the 2018 season, teams that beat the Chiefs averaged 35.2 points per game in those wins.

Tom Brady, Cam Newton, and the Biggest Story Lines of the NFL Offseason | The Ringer

Contract negotiations are based on precedent. The team argues that Player A should take a deal like Player X, while Agent A argues Player A deserves a deal like Player Z. Eventually, they meet in the middle at Y. Patrick Mahomes has no precedent. He is the youngest quarterback in NFL history to win the Super Bowl MVP award alone, let alone the youngest player to win both the Super Bowl MVP and MVP. He is one of three players to throw for 50 touchdowns in a season along with Peyton Manning and Tom Brady, but Manning and Brady did that in their 30s. Mahomes has accomplished all this before turning 25, well before most quarterbacks hit their prime. Mahomes has achieved more than most quarterbacks do in their entire careers, and the best is yet to come. All of this makes his negotiation completely different from anything that has come before it. His agent, Leigh Steinberg (who was the inspiration for Tom Cruise’s character in the movie Jerry Maguire), won’t be comparing Mahomes to other players and asking for different provisions. Steinberg can use entirely different examples from other sports and industries to create a new language around football negotiations. Mahomes could ask for a massive amount of money, like $200 million. He could ask for a short deal à la LeBron James or Kirk Cousins and demand $120 million over three years. He could ask for a clause preventing him from being franchise tagged or voiding his deal if he wins MVP or a timeshare on Mars. He can ask for whatever he wants, but what he seems to want is to stay in Kansas City for a long time. Mahomes could ask for the moon, but he might settle for just a lot of money.

Thriving On Adversity Like The Kansas City Chiefs | Forbes

Control What You Can Control: I heard the great coach John Wooden say one of the most important things he learned was “True success is defined with effort and process…not with results.” Most people get caught up in defining success with things they ultimately can’t control. Twice in Sunday’s game, Andy Reid made the call to go for it on 4th down. Both times, the Chiefs converted. While the odds were against them, successfully converting these 4th downs ultimately changed the course of the entire game. Coach Reid didn’t know what the outcome would be, but he trusted his players and their effort, and he went for it. ”Keep going,” Reid told his players as they struggled to put points on the board. “We’re going to be okay. We’ve done it before. We’ll do it again.” He wanted them to stay in the game and focus on the tasks at hand—not to worry about the results.

Limiting it to the Super Bowl and World Series, we counted six other cities that have celebrated a NFL and a MLB championship in a five-year window.

New York has done it three times, the latest a decade ago when the Yankees won their last World Series in 2009 and the New York Giants won Super Bowls after the 2007 and 2011 seasons.

Boston has dominated the pro sports scene in the 21st century. The New England Patriots and Red Sox have twice won titles over five-year spans, and just for good measure the NBA’s Celtics and NHL’s Bruins have raised banners in the last 12 years.

The other cities besides KC: Los Angeles, Baltimore, Pittsburgh (two spans of Pirates and Steelers titles in the 1970s) and Oakland.

Protecting the league’s top player should play into the Chiefs’ draft plans every year. Ruiz possesses the strength and athleticism to play multiple positions up front.

The Chiefs have to focus on retaining key players on defense this offseason, but one place where they could stand to improve is at linebacker. Queen has all the tools to succeed at the linebacker position and is capable of playing on all three downs.

The big-bearded safety was a patrolman, flying about in the secondary spearing receivers and swatting away pigskins, stepping up in the run and blowing up ball carriers.

Weddle entered the NFL with the Chargers as a second-round pick in 2007 out of Utah and made a name for himself in San Diego as a spirited tackler and ballhawk. After nine seasons, he moved to Baltimore in 2016, where he spent three seasons. He signed a two-year deal in L.A. in 2019.

Where will Tom Brady play in 2020? Ranking the eight best teams for TB12 to sign with in free agency | CBS Sports

The Colts are a very interesting suitor for Brady. They have the second-most cap space in the entire NFL, they’re a well-coached team, they boast a number of solid weapons, and most importantly they have the best offensive line of the bunch on this list by a wide margin. According to Pro Football Focus, this 2019 Colts offensive line ranked third in the league. Indy needs to figure out what starting left tackle Anthony Castonzo’s future holds, but Brady would be well protected with the Colts.

T.Y. Hilton would also be one of the better deep threats Brady has seen in his career and he could certainly increase the production of Jack Doyle as well. Not only that, but the Colts have enough cap space to bring in Brady and sure up other holes on the roster.

Indianapolis seems ready and willing to upgrade the quarterback position in 2020, but would Brady really want to play in the house that his longtime rival Peyton Manning built?

However, some interesting long shots include Derrick Henry (60-1), Daniel Jones (100-1) and Nick Bosa (100-1). Henry, the 2019 rushing leader, who was nearly unstoppable at times last season could soar to even higher heights should free agency land him with a contending team possessing a strong passing attack that wouldn’t force him to face consistent eight-man fronts.

Wide receiver Sammy Watkins made two critical catches at different points in this game. His most significant play was the fourth-quarter reception past 49ers cornerback Richard Sherman that went 38 yards to set up first-and-goal. His last catch of the night led to the initial lead-taking score to make it 24-21. Watkins talked about the play on the NFL Network post-game show.

“Man shoutout to Davante Adams,” Watkins said, showing respect to the Green Bay Packers wide receiver that saw Sherman in the NFC championship. “Watching him beat him on the post and beat him inside, Richard Sherman does not wanna let you outside, one of the best cornerbacks I think, top players in this league. I felt I had an easy release inside and I took my advantage on him, me and Pat just connected on a great play, he was too close to me. I didn’t pitter-pat at the line and play, I just played fast and depended on my speed and physicality. I made one of the biggest plays of the game.”

Early in the video clip, Hill could be seen moping on the bench — and Mahomes made a point to go over and tell him to believe. Hill’s second-down catch being challenged by San Francisco gave Mahomes enough time to speak to offensive coordinator Eric Bieniemy, and Mahomes suggested this lifetime’s version of “65 Toss Power Trap.”