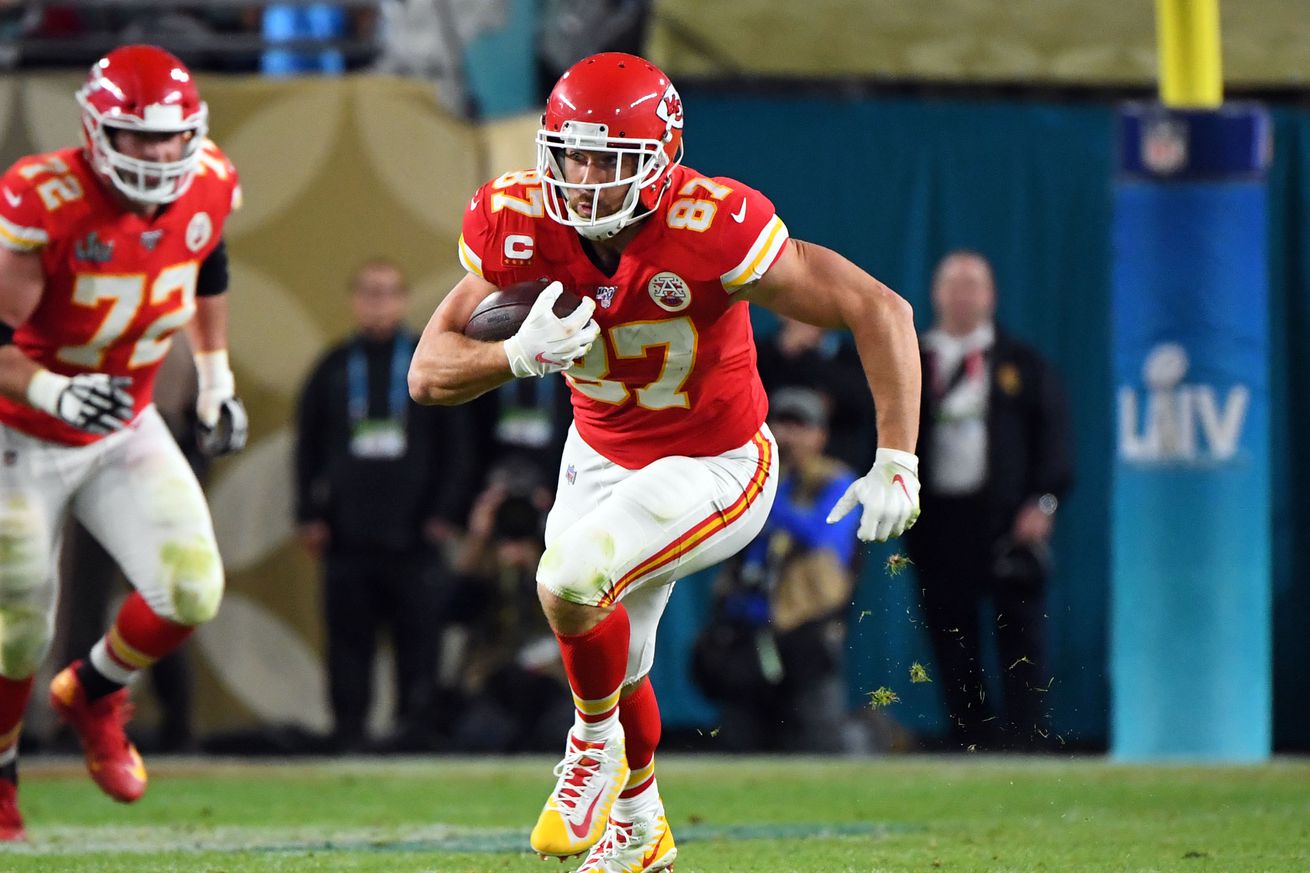 Fun fact: No tight end has ever been named Super Bowl MVP. (The Bengals’ Dan Ross would likely have been named MVP had Cincinnati defeated the 49ers way back in Super Bowl XVI.) Kelce, who caught six passes for 43 yards and a touchdown in the Chiefs’ Super Bowl win over the 49ers, could be the first to do it.

The first tight end in NFL history to log 1,000-plus receiving yards in four consecutive seasons, Kelce’s confidence couldn’t be higher heading into 2020. He just signed a new deal and is the favorite target for the league’s top quarterback. Kelce has been a huge mismatch against safeties/linebackers, and that shouldn’t change in 2020.

There was only one unanimous decision in our poll: putting the defending Super Bowl champs back in first place. They will be there until somebody knocks them off.

The offense will roll again, so it’s about the defense. There are concerns about the corners, which could be a problem.

Everyone knows the Chiefs have an incredible offense with Patrick Mahomes at the controls. What gets far less pub is a defense that morphed into one of the league’s stingiest in the back half of 2019. Kansas City allowed just 11.5 points per game in the final six games of the regular season, then overcame early hiccups in playoff games to close out a championship. The Chiefs now return 10 of their 11 defensive starters from their Super Bowl team with a full season of familiarity in Steve Spagnuolo’s scheme. Sorry, AFC, the Chiefs have the potential to be great on both sides of the ball.

Bolton is one of the best players no one talked much about this summer, but he adds youth, speed and explosiveness to a young Chiefs defense.

The Sounds of Silent NFL Stadiums | The Ringer

The pumped-in sound provided by the league will create a “baseline murmur,” according to the memo sent to teams, but it won’t re-create regular game-day atmospherics. Why does this matter? If less noise makes calls at the line of scrimmage easier to overhear during games or on TV, it could change the competitive balance between defenses and offenses. Former NFL offensive lineman Joe Thomas told me that defenses can already pick up a lot of offensive communications, but that this year, he thinks “there’s going to be so much more sign-stealing, for lack of a better word.”

Dallas Cowboys’ Dak Prescott: I will ‘seize the moment’ after difficult offseason | ESPN

While Prescott’s contract, future, level of play and pitchman skills are discussed almost daily on national programs and local talk radio, he is more concerned about what is directly in front of him.

“I seize the moment. I focus on the now,” he said. “I think it’s very important for me to do exactly that and not to be distracted or put too much focus anywhere other than what it is that I’m doing now.”

The Cardinals have agreed to terms with Hopkins on a two-year extension worth $54.5 million in new money, NFL Network Insider Ian Rapoport reported.

Arizona acquired Hopkins in a trade that was influenced by his desire for a deal worthy of his play. At $16.5 million per year, Hopkins is the ninth-highest-paid receiver across the league, yet he’s one of only two receivers in the entire league to be named a first-team All-Pro in each of the last three seasons. The other, Falcons receiver Julio Jones, makes the most money on average ($22 million per year) at the position in the NFL.

“Colin Kaepernick is one of the top free agents in football and a starting-caliber quarterback. The team at EA SPORTS, along with millions of Madden NFL fans, want to see him back in our game. …

“Knowing that our EA SPORTS experiences are platforms for players to create, we want to make Madden NFL a place that reflects Colin’s position and talent, rates him as a starting QB, and empowers our fans to express their hopes for the future of football. We’ve worked with Colin to make this possible, and we’re excited to bring it to all of you today.”

Remember when the Lions ran the Chiefs real close last September? If they can reproduce at that level, they’ll be frisky.

Bradley Roby on finally playing a game during a crazy year and seeing Chiefs again after playoff loss: ‘There’s definitely going to be some emotions on both sides. I feel like this is the best matchup you can do to start the season’