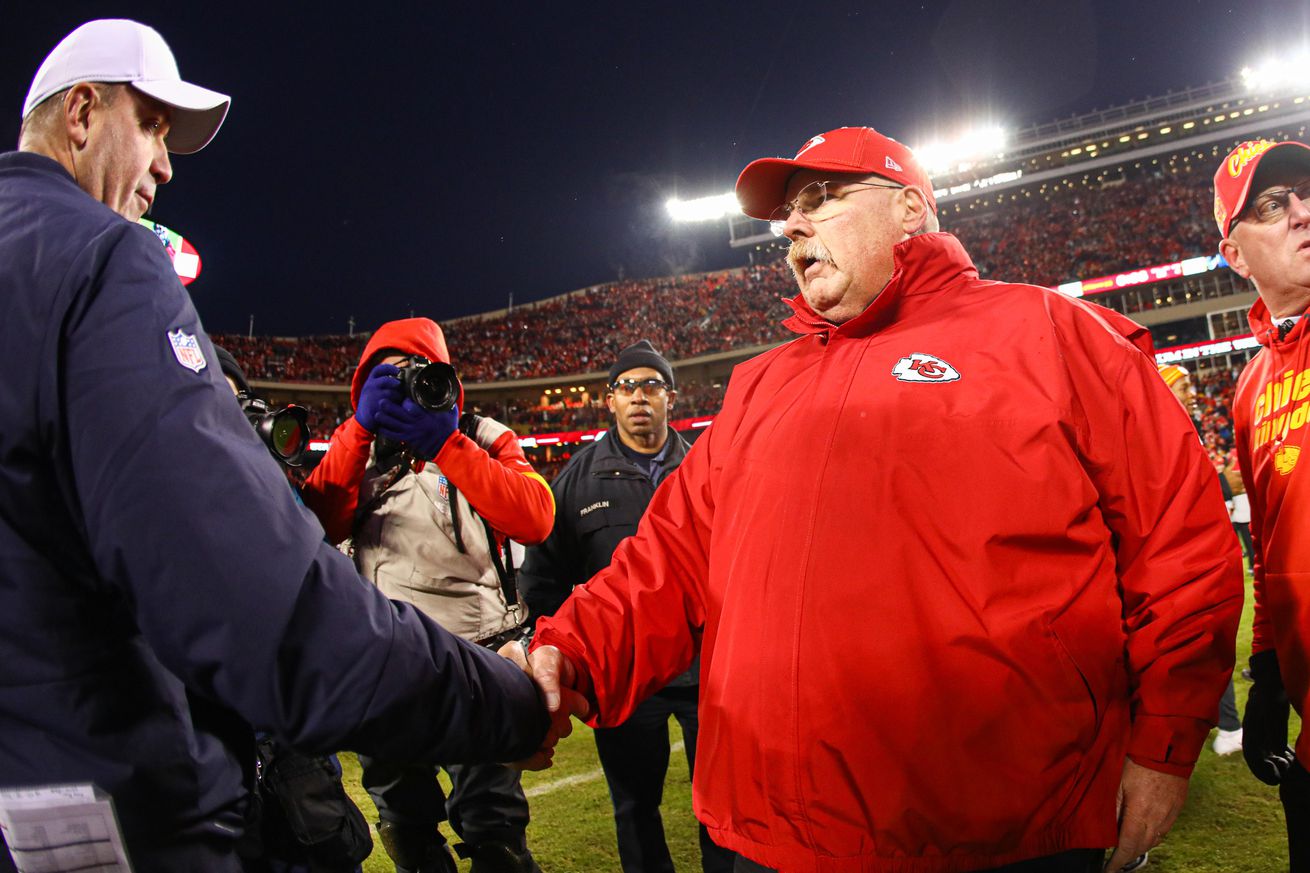 Teams trailing by multiple scores also generally can’t get back in games by running the football, but that didn’t stop O’Brien either. The Texans had the ball for 10 plays during the third quarter, trailing by 17 points on all of them. O’Brien ran the ball on seven of those plays, and an eighth resulted in a sack. It was brutal coaching. Trying to stage a double-digit comeback by running the ball is like trying to eat soup with a fork. That would be damning for any head coach in the league, but it’s especially so when the head coach eating the soup is also in charge of acquiring the cutlery.

No. 5: Meanwhile, the Chiefs’ pass rush is a problem in different ways.

Seriously, I don’t know how much more I can gush over this team. Watson was under constant pressure all night and really never found a comfortable place to lead the Houston offense.

Finishing with four sacks on the night, Kansas City proved they can beat teams in myriad ways — making them truly the nightmare team of the NFL. At this point there’s zero reason to believe they won’t repeat as Super Bowl champs until someone finds a way to slow them down.

Whether that’s possible or not remains to be seen.

Harbaugh is one of Reid’s best friends, and even Harbaugh’s wife, Ingrid, couldn’t resist joking about the face shield.

“She did mention to me, in the Kansas City area, there’s going to be a lot of Halloween outfits with face shields and mustaches — and foggy face shields,” Harbaugh said. “So, wow, that’s tough.”

And here’s the really scary part for the rest of the NFL: Edwards-Helaire left Baton Rouge with a reputation as a premium pass-catching threat out of the backfield, yet he didn’t record a single reception on Thursday. With the Chiefs poised to eventually tap into their RB1’s dynamic playmaking skills in the air game, the Super Bowl champions are still scratching the surface of their offensive capabilities.

The game averaged 19.3 million TV viewers, according to Nielsen data, a decline of nearly 13% compared with last year when 22.1 million viewers watched the Green Bay Packers open the season against the Minnesota Vikings.

NBC said an additional 977,000 million viewers were watching on streaming platforms, which bumped the total audience up to 20.3 million.

We’re a good city of good people. I heard boos too. But we also have hundreds of thousands more around here who respect the message the players are sharing; who respect the rights of our players and people to voice a strong message and who are working to make us better each day.

His was not the only social media reaction that called out the Chiefs fan base for its actions.

Kansas City councilperson Eric Bunch took to social media to share his disappointment in the boos echoing from the half-empty stands.

“The incident was particularly striking because it was meant as a show of unity rather than any kind of protest with players, both black and white, linking arms,” he said on Twitter.

McManus was in the last year of a four-year deal he signed with the Broncos in 2017 — he has a $3 million base salary this year — and would have been an unrestricted free agent at season’s end. He was the only kicker the Broncos had in training camp, and Denver’s special teams coach Tom McMahon has consistently praised McManus’ readiness for the season.

“B-Mac, he’s hitting the hell out of the ball right now to be honest with you,” McMahon said recently. “The ball is getting up. His ball rotation is never sideways. I love what he’s doing. His kickoffs are awesome. How he’s approaching, he’s just attacking. … His expectations are high.”

The Pittsburgh Steelers are legit Super Bowl contenders and justifiably so. The Giants will be competing for the first-overall pick. The Steelers get back a Hall of Fame quarterback, they have one of the top defenses in the NFL that has playmakers at every level and a pass rush that won’t quit. They are a turnover machine and they’re facing a quarterback who fumbles seemingly every other snap and who has a weak offensive line in front of him and has a defense that has been a failure for years. Big Ben will be out to put on a show on Monday Night Football to show that he is back, and the Giants will put up almost no resistance. Getting this game at less than a touchdown is extreme value to me. Once we get a few weeks into the season, if these teams were to meet again this is definitely a double-digit spread.

“I started, as the season got closer to being here, I started to think about it a little bit more, get kinda anxious a little bit,” Ramsey said. “But having it done before the season — before, really, this week’s preparation — meant a lot.”

Dorian O’Daniel: The guy we thought might get cut just a week ago saw only five defensive snaps. But in those snaps? He was in on four tackles and a sack. Perhaps he’ll see an increased role going forward — the Chiefs can clearly use the speed in their linebacker corps.

#SackNation: Chris Jones was involved in two sacks (credited for 1.5) and six pressures, and Frank Clark had another. Both were a problem for the Houston offensive line all game long. These guys are both going to make their case for Defensive Player of the Year and have a real chance at establishing a reputation as the best defensive tackle-defensive end duo in the league.