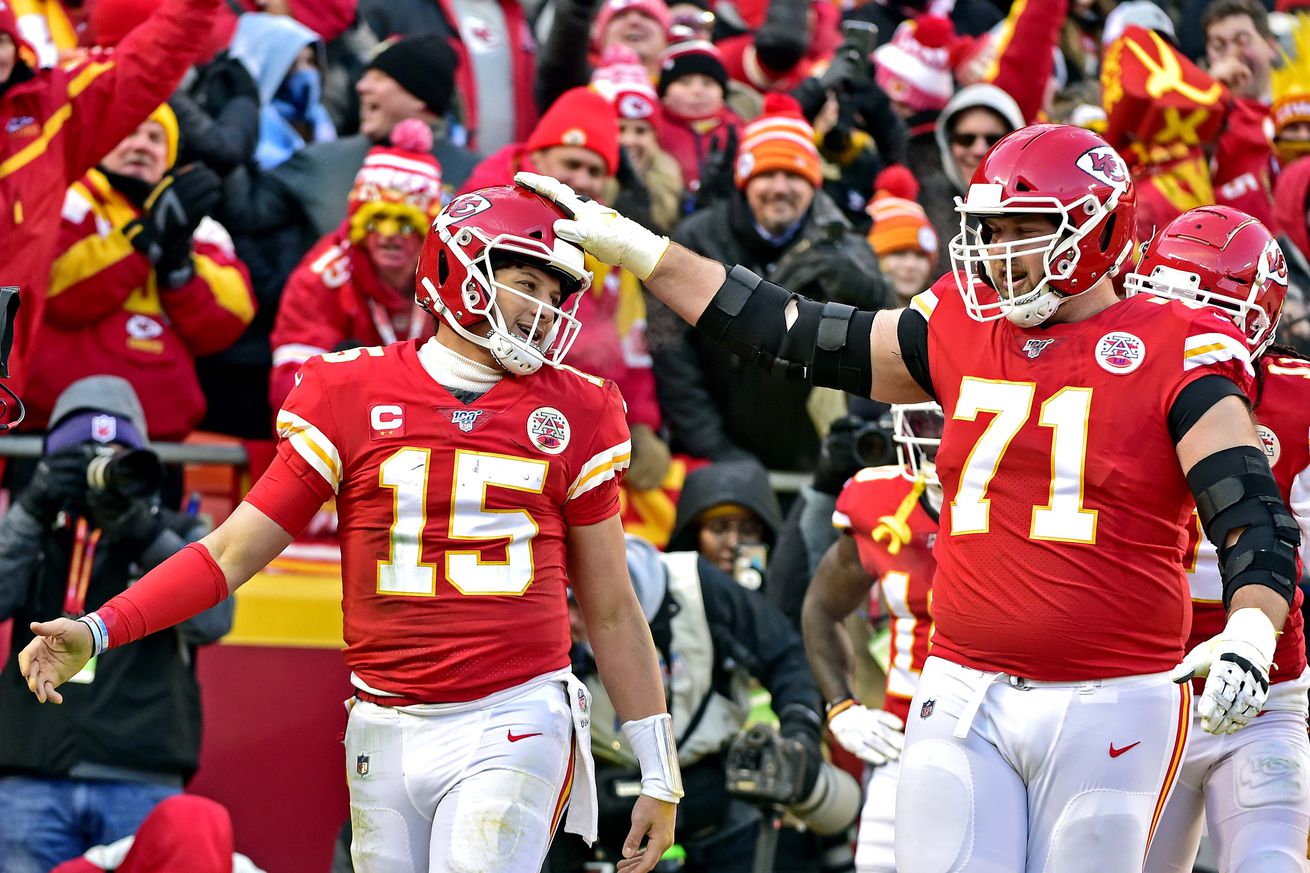 KANSAS CITY CHIEFS: Mitchell Schwartz, RT, ninth NFL season: Here’s a fellow who hasn’t missed a single start during his eight-year career. Mimicking his friend and former teammate Joe Thomas for rarified ironman status, Schwartz has evolved into a rock who nabbed All-Pro honors in 2018, but evaded the eyes of the seemingly hammered house party of voters deciding how the Pro Bowl should look. Last season, Schwartz was the only tackle in the league to play 750-plus pass-blocking snaps without allowing a single sack. When Patrick Mahomes and the Chiefs needed Schwartz at his finest, the count-on-me lineman responded with a postseason etched in gold:

Mitchell Schwartz legitimately just had one of the greatest postseasons in NFL history.

Almost the entire time in obvious pass situations as the team trailed, against legit pass rushers.

Two, hurries. Nothing else.

Ranking offensive weapons for all 32 NFL teams in 2020: Barnwell picks the best and worst | ESPN

The Chiefs rank first for the second time in three years because they’re so deep with receiving options. Travis Kelce is the NFL’s most productive receiving tight end. Over his three seasons as a starter, Tyreek Hill is sixth in receiving yards and fourth in yards per route run among wide receivers. Sammy Watkins might not live up to the contract he signed or the expectations he had when he was drafted No. 4 overall in 2014, but he racked up 288 receiving yards when the Chiefs needed him in the playoffs, the second-highest total of the postseason. Mecole Hardman quietly averaged 1.90 yards per route run; he only caught 26 passes, but nearly 35% of them went for 20 or more yards, which was the fifth-highest rate in the league. Every one of these guys is a threat to score from anywhere on the field.

“It’s obviously premature. Obviously, we’ve had a great start to my career,” he said. “I am blessed to be in a great organization and have a great team around me, which has made the transition easier for me. Now, it is about stacking those years. It is about trying to find ways to get back to the Super Bowl, win those Super Bowl championships and I think if I go out there every single year and I put my best effort forward, when I get to the end of my career I’ll be happy with where I am at.”

Going head-to-head with former Rams/Steelers/Panthers linebacker Kevin Greene, Williams won the right to play for his side by picking an elephant when asked to name an animal that would probably kill you if it sat on you.

Before that, Williams admired Greene’s Hall of Fame ring. Greene said: “Put some stats on the board, then maybe.”

When host Steve Harvey noted the trash talk, Greene added: “I’m just calling it like I see it.”

Harvey thought Greene had a Super Bowl ring and Williams said: “I got one.”

Is the NFL being too hasty to get the season kicked off as scheduled? | Texans Wire

Time is running out, and it’s preposterous to think there will be no interruptions caused by players, coaches and other personnel testing positive for COVID-19 and being forced to quarantine. Positive tests could create chaos if teams report to camp when they’re supposed to.

The Texans and Kansas City Chiefs are scheduled to report in less than two weeks. That’s ridiculous considering everything that still has to be ironed out — testing procedures, preseason games, roster sizes, opt-out clauses, practice schedules and salary cap implications, just to name a few.

The prudent thing for Goodell and the owners to do is to take a deep breath and delay the start of camp. They did the right thing by cutting the preseason schedule in half. Now what’s the rush with starting camp on time? These are extraordinary times that require extraordinary measures from leaders who have to lead.

The bosses for the Chiefs and Florida State University had to join those running the Braves by ordering fans at their sporting facilities to stop chopping and chanting, period.

The Braves, the Seminoles and the Chicago Blackhawks were making themselves look silly trying to explain why their names actually honored Native Americans, but they bought a little time (very little). As for the Indians, not so much. Thus the Indians’ change to Spiders, the name of Cleveland’s professional baseball team from 1887 to 1899 before it became the Indians.

Mostly, historians will try to control their giggles over how the Braves, the Chiefs, Florida State, the Indians (before their name change) and others on July 13, 2020 kept talking about surveying their fans for feedback and huddling with Native American groups and doing other things to delay the inevitable.

Dobbins went 55th in the 2020 NFL Draft after a record-setting career with the Buckeyes. He was the fifth running back to go off the board, but apparently Electronic Arts felt he was the best all along.

Coming in a tie for second were Detroit Lions rookie D’Andre Swift and Kansas City Chiefs rookie Clyde Edwards-Helaire. They were both given a 74 rating – lower than Dobbins’ despite going ahead of him in the draft.

As NFL Players, We Face Unknowns Just Like the Rest of the Country | SI

As the days roll past in July, every NFL player is scrolling through Twitter, finding out news about the upcoming season, wondering if there will even be a season. So many questions with virtually no answers, all three weeks removed from a potential start to training camp. As fear continues to grow for our nation, it is also being spoken about among us players. Will we have an option to opt out of the season? Will we be making our full salary? What if there is a COVID outbreak within the league? It’s so hard to make a decision of whether we will play or not without knowing what the exact plan is. Nothing has been agreed upon when it comes to what the stadium will look like. Will we be able to have meetings in the building? Or will the meetings still be done virtually? Will testing be a few times a week or will it be every day? As players, how do we decide what is best for us and our families when we don’t know what we’re walking into?

The team announced Monday that it will be retiring the team nickname and logo. A new team name will be announced at a later date.

“Today, we are announcing we will be retiring the Redskins name and logo upon completion of this review,” the team said in a statement. “Dan Snyder and Coach (Ron) Rivera are working closely to develop a new name and design approach that will enhance the standing of our proud, tradition rich franchise and inspire our sponsors, fans and community for the next 100 years.”

Walker said, as an African American, he understood the confusion over what a group wanted to be called. He also understands the conflicting emotions that many fans will have.

“It wouldn’t tarnish any of the memories,” Walker said. “We looked at it as a badge of honor. I was proud of that logo. Man, the first time I saw it I thought it was a Black man. I couldn’t believe it. I always looked at it as a sense of pride. When we had contact with Native Americans, it always seemed there was a sense of pride. But everybody is different. If it infringes on anyone’s human rights, then I’m just as happy if they call them the Warriors or the Red Tails or whatever.”

Even After Agreeing to Change the Name, Dan Snyder Still Won’t Admit He Was Wrong | SI

Everything Snyder has done with the name has been about a fight. He didn’t listen to people who were hurt by the name. He cited flawed polls that told him what he wanted to hear. He tried to buy his way out of criticism. He caved only because of financial pressure from sponsors. Even in the end, when he announced he would change the name, he did so grudgingly, from the @Redskins Twitter account, with the offensive logo on the letterhead, in a statement that mentioned the “proud, tradition rich franchise” but not the Indigenous people who demanded the change. Dan Snyder sees what he must do, but he still won’t admit why.

Olsen, 35, signed a one-year, $7 million deal with Seattle in February after being released by the Carolina Panthers in January. The three-time Pro Bowl selection plans to honor that deal and has no set plan on when he will retire, a league source told ESPN.com.

The Fox contract currently plans to pair Olsen with Kevin Burkhardt when Olsen is finished playing. Should the Seahawks not make the playoffs and Olsen opts to retire after this season, he potentially could be moved into an analyst role for the playoffs.

Aside from Mahomes, which Chiefs players are toughest to lose?

Last year, Mathieu’s impact was certainly felt in Kansas City; he should have garnered consideration to be named NFL Defensive Player of the Year. He is one of the best slot defenders in all of football — and the heart of the Chiefs defense. He is an outstanding leader and communicator in the back end of Steve Spagnuolo’s scheme, making him uniquely capable of handling the slot. Behind Mathieu, there are big questions about who can handle those responsibilities if he loses time. Losing him for a stretch would very difficult.