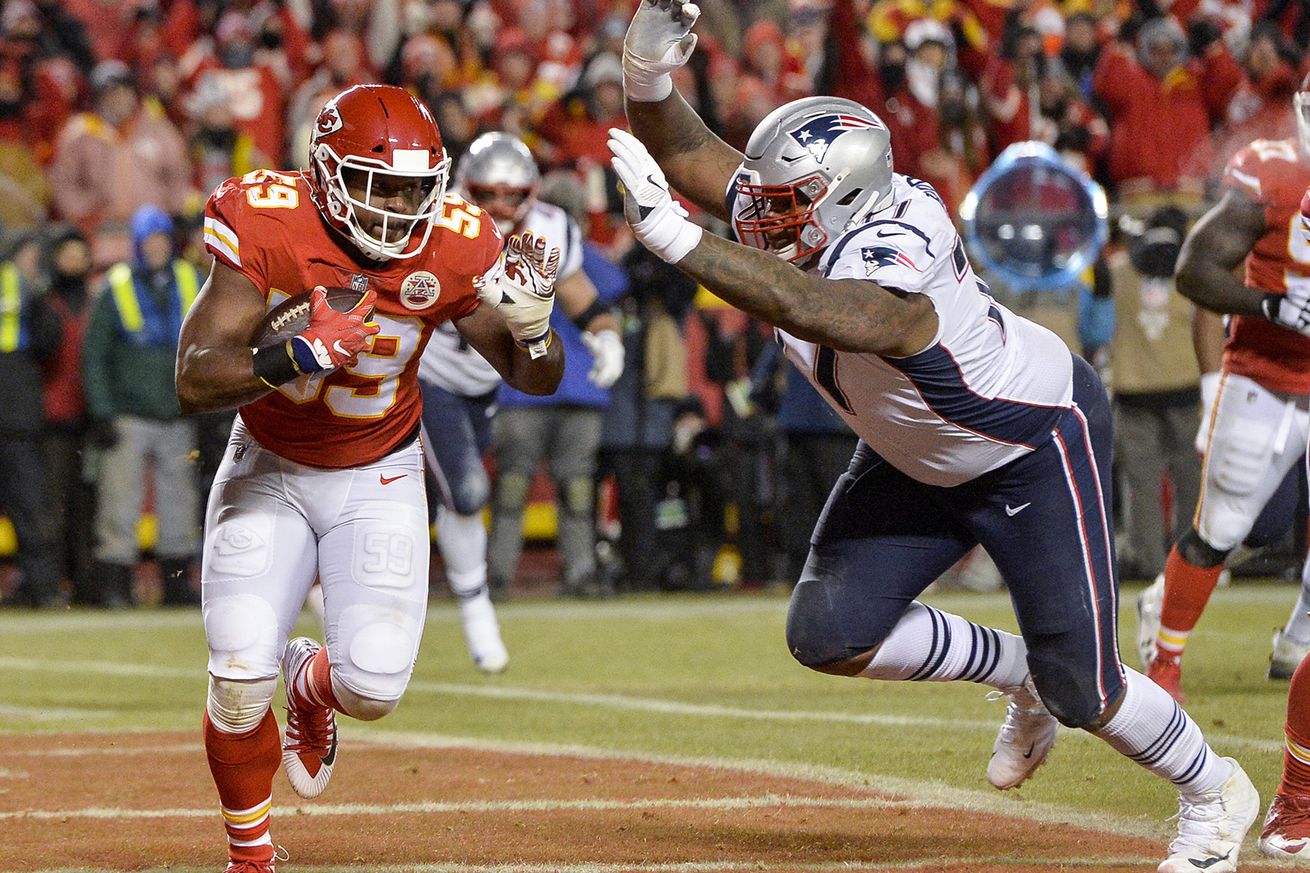 What stays the same:

Not a whole lot. The Saints and Chiefs were the two No. 1 seeds and cruised through the Divisional Round. That still happens here, but now they’re better positioned to actually win their respective conferences and make the Super Bowl.

With so many close overtime results, it’s likely that the teams with first-round byes would’ve reigned supreme. Kansas City vs. New Orleans is our new Super Bowl, a much more exciting matchup than the Patriots’ 13-3 snoozefest win over the Rams. We’ll give the Saints the edge due to experience.

When Frank Reich became the Colts head coach in 2018, Matt Eberflus became his defensive coordinator. Eberflus runs a 4-3 defensive scheme that is similar to the one that Jones played with the Kansas City Chiefs in 2019.

In his first three seasons in the NFL, Jones played in Bob Sutton’s defense that had a ton of 3-4 tendencies. As a result, Jones was asked to spend most of his time as a defensive end.

Then, with Steve Spagnuolo replacing Sutton in 2019, the Chiefs switched to more of a 4-3 defense. While the team transitioned to a 4-3 defense, Jones was best-suited as an interior lineman.

Despite being in a 3-4 defense to begin his career, Jones thrived in a 4-3 scheme in 2019. The Mississippi State product had one of the best years of his career as he notched nine sacks, eight tackles for loss, and 20 quarterback hits. In the event that the Colts signed Jones, he wouldn’t need to adjust much to get acclimated to their defense.

“I’m going to play ball,” Bryant said on The Boys and Girl podcast. “If it’s not for Dallas, Cowboys fans, hey, I want to play ball, so I’m going to see who opens the doors for me. I’m just trying to come in and do whatever they tell me to do. Be the best version I can, help in any type of way. If that’s me giving water to the quarterbacks, to the running backs, telling the other receivers certain things, I don’t mind. I just. . . I miss the game.”

I don’t even want to think about how good the Chiefs’ offense will be with Swift in the fold.

Kansas City needs to plug a hole at cornerback. Hall is coming off an injury but has not slipped in the rankings. He is a special player when healthy. The Chiefs would be wise to take him late in the first round.

“Today, the NFLPA Board of Player Representatives did not take a vote on the principal terms of a proposed new collective bargaining agreement,” the statement read. “The Executive Committee looks forward to meeting with NFL management again next week before the Board takes a vote shortly after.”

NFL to allow betting lounges in stadiums, but no gambling | ESPN

Retail sportsbooks are still prohibited at NFL stadiums, and there will not be any physical betting windows. However, stadiums in jurisdictions with legal sports gambling may offer betting lounges, showcasing mobile betting options, according to Chris Halpin, chief strategy and growth officer for the NFL.

”We’re allowing betting lounges,” Halpin told ESPN on Friday. “Similar to daily fantasy lounges today, in an adult, discreet area, there will be a betting setup, but we’re not going to have betting windows.”

Hunt has been one of the top running backs (when he’s on the field) since he entered the league in 2017. As a powerful zone runner and unmatched weapon out of the backfield, he immediately impacts the run and pass games just by being on the field. Hunt is elusive when running between the tackles or out in space, as he’s forced a missed tackle on 24.7 percent of rushes since 2017, the highest percentage in the NFL in that span of players with a minimum of 275 rushes. In addition to his off-field concerns — and there are several — the important thing to know here is that he’s a restricted free agent. The Browns can choose to place a tender on him — they will get compensation in return if another team signs Hunt — and they have the opportunity to match any offer sheet the back signs with another team.

In his first year as the Baltimore Ravens’ starting left guard, Bradley Bozeman held his own against the likes of Chris Jones and Cameron Heyward.

But his most memorable feat: taking down a 72-ounce steak.

This is where things get a bit uncomfortable for the Cowboys, and maybe a few other clubs as well.

There is zero doubt Dallas wants Cooper, and Cooper feels the same way, but this is a team that fights tooth-and-nail to pay less than market value for players. They’ve taken losses as it relates to their uber-frugal model in setting the market at 4-3 defensive end for DeMarcus Lawrence and then a few months later when doing so at the running back position, by way of Ezekiel Elliott, but have their share of wins when as well when factoring in the deals on Jaylon Smith and La’El Collins.

Cooper isn’t as open to a discount as Smith or Collins though, and his market value being a robust $19.7 million annually — per Spotrac — is one reason the Cowboys are ready and willing to exercise a tag on him for 2020. The franchise tag and transition tag at wide receiver are roughly $18.49 million and $15.93 million, respectively, making both less expensive than what Cooper’s average annual salary would be on a new deal.

“Chris is obviously a great player and he’s a priority,” Veach told Kissel. “We have a lot of priorities and we know how hard it is to win a Super Bowl — hadn’t done it in 50 years, and we won it with the group we had last year. So I think that as we attack this offseason and first up, it’s free agency before the draft, our goal and our mindset is to do whatever we can to retain as many players as we can, and Chris is at the top of that list because of the talent he is. We have a lot of tough decisions to make, but our goal and our intent is to retain as much of this team and keep intact as much of this team as possible.”