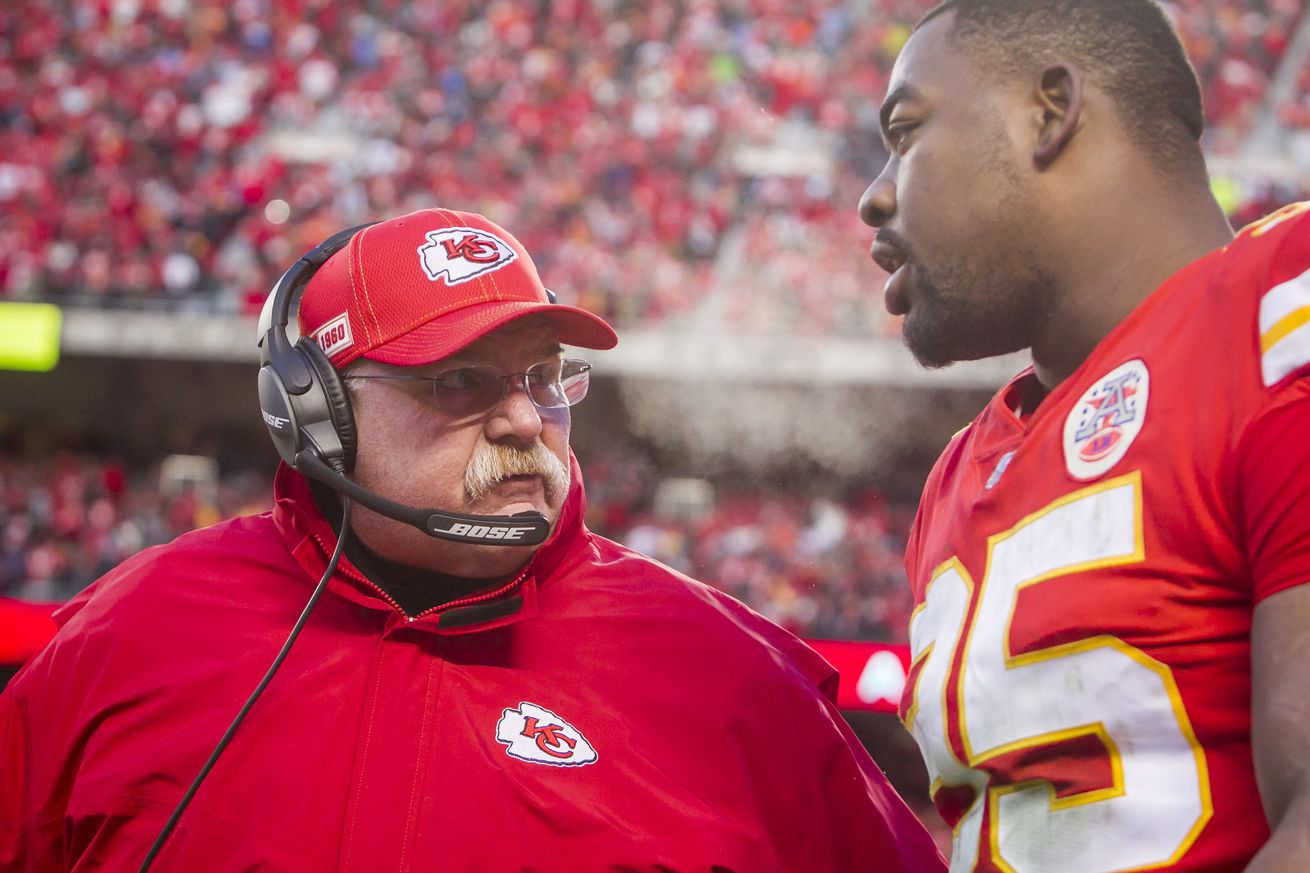 Reid appeared on Mike Krzyzewski’s SiriusXM show, “Basketball and Beyond with Coach K” on Thursday evening.

“Coach K” congratulated Reid on his Super Bowl title win before asking him about life, how he builds a coaching staff, and of course, Chiefs quarterback Patrick Mahomes.

“He’s going to come in, he’s going to work his tail off,” Reid told Coach K about Mahomes. “He comes in with a smile on his face but that hunger in the heart, and he wants to rip your throat out every time he has an opportunity to on the field. You love that. And he’s an innate leader, so the guys know that his closet’s clean, and he’s doing it the right way. He can crank on guys when he needs to, but at the same time, be a dude, right? You want to be able to kind of balance that and that’s a tough thing to do as a quarterback.”

Krzyzewski followed up by asking Reid about just how much freedom he gives Mahomes to improvise in the Chiefs’ offense.

“I tell him, I use that ol’ ‘You got the keys to the car,’” Reid said. “I’m over on the sideline. He’s got the option to get out of any play any time. And then there are various reads on the play, so we overload him quite a little bit with that stuff, but he’s got enough gigabytes in the computer up there on his shoulders that he can handle it. He’s a smart kid.”

The news that Mahomes can audible out of any play at any time speaks to just how much trust Reid has in him in just his second season in the league. Mahomes took over for Alex Smith for the 2018 season, and Reid admitted that going into that year, he had some fears that the offense might suffer.

“I tell that story about Alex Smith, who’s one of the smartest guys I’ve ever coached, and the ultimate pro. I was afraid that when Alex left, we wouldn’t be able to keep growing this offense. But that wasn’t a problem at all, and that’s quite an accomplishment by Patrick to be able to do that.”

The mutual level of respect the two coaches have for each other was evident throughout the interview. Reid candidly answered all of Krzyzewski’s questions, including one about potentially being able to keep most of the championship roster for the 2020 title defense.

“Well we’ve got a couple [players] that we potentially [could lose],” Reid said. “Chris Jones is one of them. He’s a restricted free agent, so in theory, you potentially could lose him. But we also have his rights, and we would like to keep him. That’s what we’d like to do. You have to work that out. When you have a quarterback that’s coming up on a potential contract that might cost a couple Big Macs — it’ll be one of those expensive deals — you’ve got to work that salary cap and balance that thing out.

“[Jones] did a nice job for us, so we’d like to keep him. But for the most part, we’ll be a whole team. We could go line up today, even with free agency and be able to play and compete. And that’s not with adding anybody from free agency and/or the draft.”

Reports saying that the Chiefs would tag Jones emerged last week, but the move has yet to be officially announced by the team as of this writing. Reid’s words all but confirm it.

Even with some of the new information revealed by Reid, I found the most interesting part of the interview to be when the two coaches spoke about team culture building. Whether you’re a fan of the Chiefs or Duke or not, it would be hard to argue against Reid and Krzyzewski as all-time great coaches, period.

In the exchange, they seemed to share a key to building a winning culture, and it was simpler than I expected: honesty.

“If we can work hard and we can be honest with one another, I think that’s a good starting block,” said Reid. “And so I tell the players that I’m never going to put you on the spot in the media. I’m also going to bring it every day. I’m going to give you my best shot every day, and if I’m not, tell me. And I’m surely going to tell you if you’re not. But let’s get in this thing and be a true team and work together. And your strength will cover up my weakness and my strength will cover up your weakness. And let’s go roll.”

“Well, you bring up, really to me, the most important aspect of building culture, and that’s being honest with one another,” answered Krzyzewski. “You know, I tell my guys all the time — let’s just tell each other the truth. Those are confrontations. Confrontation is meeting the truth head on, but when you do that, the single biggest thing is trust. You trust your guys, and they trust you, and you bring that every day.”

It was one of the better interviews Reid has given in a long time, and it is no surprise that it came on a fellow all-time great head coach’s radio program.

Mike Krzyzewski’s SiriusXM show, “Basketball and Beyond with Coach K” is broadcast on channel 84. You could hear the full conversation on SiriusXM on Demand.